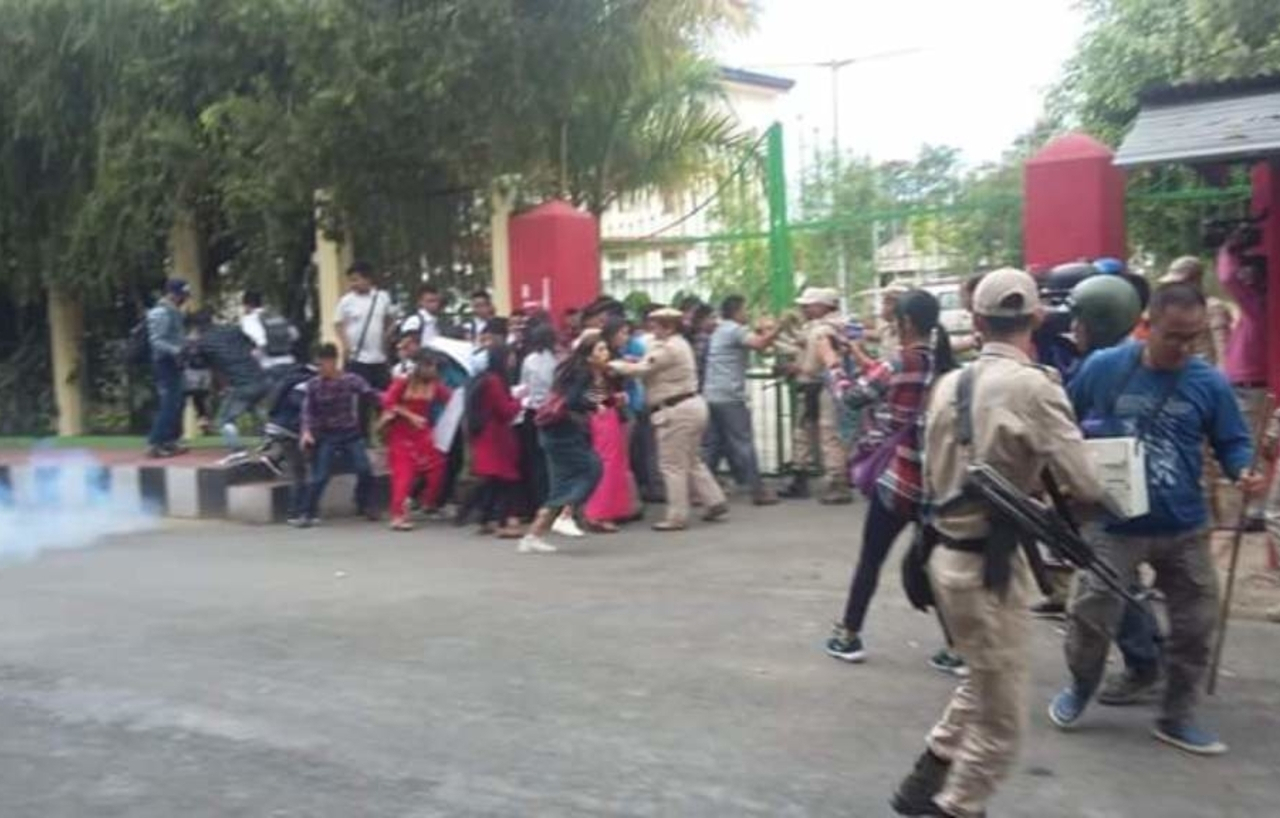 The civil society in Manipur intensified it’s reaction against the armed siege of the Manipur University by the BJP government. It is now revealed that pro-VC K Yugindro was “never manhandled by the students” and he lodged a “false FIR” that led to the armed siege in MU. As the conspiracy became evident and protests intensified, 13 more students were arrested. Michael Samjetsabam examines the recent developments before the High Court ordered the suspension K Yugindro form the post of pro-VC.

Civil society organisations called for a 48-hours General Strike demanding the release of arrested students and faculty members of Manipur University. BJP CM Nongthombam Biren threatened action against those who are supporting the bandh. He justifies the midnight raid in MU arguing that agitators attacked, threatened and kidnapped pro-VC K Yugindro, defending the arrests claiming that those arrested are bad people. Claiming to have video footages of the gherao where students threatened the pro-VC, the Chief Minister urged people not to support the bandh. Manipur University Students’ Union announced the boycott of examination. School and college students protested in different places of Imphal Valley. The CM called the agitators for negotiations, but the arrests continue. Police made several arrests in connection with the MU movement. Three college students were arrested on the 25th and the 26th September. Police raided the home of Churachand Higher Secondary School Student Union’s General Secretary in connection with protests demanding the release of arrested students and faculty members on the 28th of September. Police arrested his father as they could not find the son. They took away his diesel auto which is the only source of income for the family. Manipur Police also arrested a volunteer of People’s Resurgence and Justice Alliance for throwing eggs at the photos of PM Modi, CM Biren, Suspended VC Pandey, Pro VC Yugindro and Registrar Shyamkesho on the 28th of September.

CM Nonthongbam Biren’s justifications and police’s version are facing problems. The claim that agitators manhandled the pro-VC is now doubtful. Pro-VC himself on Impact TV claimed that students attacked him with eggs. He did not mention sticks and stones, which raises doubts regarding his alleged manhandling by agitators. He told the media that “centre is scolding the Chief Minister” because of Chief Minister’s inability to resolve the matter. In order to rescue the CM from the embarrassment, Yugindro seems to have given thirty-one names which include office bearers of Manipur University Students’ Union, Manipur University Teachers’ Association and Manipur University Staff’s Association, to CM Nongthombam Biren. Videos of the gherao started taking rounds on the social media. These videos do not capture any violence, or threats, towards pro-VC K Yugindro, creating further problems for CM’s justifications. Chief Minister never mentioned the matter again. 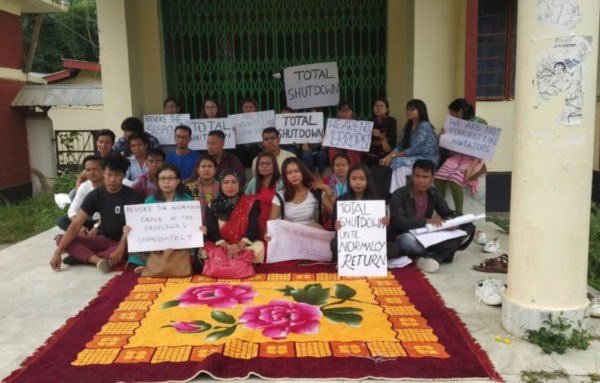 On 1st of October, under enormous pressure from civil society organisations, the CM withdrew the armed forces from MU, and ordered to stop the raids and arrests. Women hostelers had been on an indefinite hunger strike demanding the withdrawal of armed forces from the campus and release of arrested students and faculty members, since the 24th of September. Pro-VC assured them that he would raise these issues with the Chief Minister. In the meeting with these women hostelers, K Yugindro claimed that he did not know that police would invoke strong sections on the FIR. He claimed that he suspended the teachers to please Ministry of Human Resource Development. Hostelers withdrew the hunger strike on the 1st of October when CM withdrew the armed forces from the campus. The audio recording of the meeting between K Yugindro and women hostelers took rounds in social media.

On 3rd October however, K Yugindro had written a letter to MHRD in which himself claims that he filed that FIR against “terrorist-like” agitators, for terrorising him. The police raids and arrests were based on his FIR. In this letter, K Yugindro claims that the Chief Minister has taken a “U-Turn”. He wrote that Najma Heptulla, Governor of Manipur, overtly supports the agitators. He is also “shocked and surprised” that Governor of Manipur has questioned his appointment as pro-VC on the grounds of Manipur University Act, 2005. In short, he alleges Governor Najma Heptulla of supporting “terrorist-like” agitators of Manipur University. He then goes on to urge MHRD to provide him with Y-Security cover. This letter also became public. Pro-VC K Yugindro changes his facts according to the audience. He told a very different story to the women hostelers who were on hunger strike. 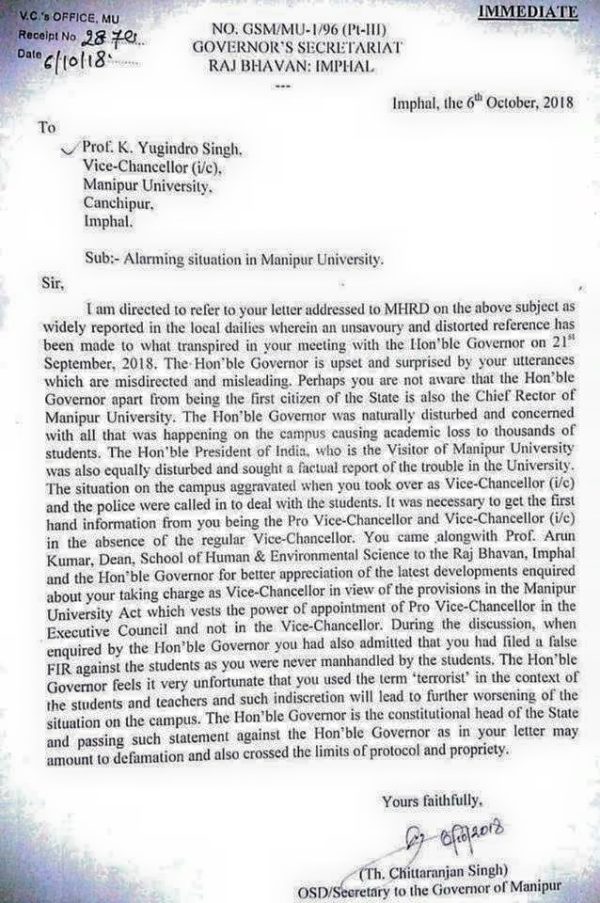 Pro-VC K Yugindro’s letter to MHRD provoked a letter from the Governor’s office. On 6th of October, Governor’s office wrote a letter to K Yugindro pointing out that the situation got worse after he took charge as pro-VC. It regrets that K Yugindro compared the agitators with terrorists. It mentions such comparisons can make the situation worse. The letter points out that only Executive Council has the power to appoint a pro-VC. AP Pandey did not have the authority to appoint K Yugindro as a pro-VC according to MU Act 2005. Manipur University Teachers’ Association has pointed out multiple times that his appointment as pro-VC violates the MU Act. Armed forces entered the University on the complaint of a pro-VC who was appointed by AP Pandey who had no power to appoint a pro-VC without involving the Executive Council. Furthermore, the letter from the Governor’s office also points out that K Yugindro revealed to Governor Najma Heptulla that he was “never manhandled by the students” and he lodged a “false FIR”.

Either the Chief Minister’s claim, that K Yugindro told him that students attacked and threatened him, or the Governor’s clarification that he accepted to her that he had filed a false FIR – only one of this is true. The letter from the Governor’s office to K Yugindro claims that the Governor knew the FIR that resulted in the armed siege of MU, was false since 21st of September. The armed siege lasted till the 1st of October. Falsity of the FIR however did not come to light before K Yugindro, for his own reasons, attacked the Governor on his letter to MHRD dated 3rd October. Research Scholar Yanglem Loijingkhomba has lodged a complaint against K Yugindro, claiming that his name was falsely there in the FIR. He has claimed that he was in an examination duty during the gherao, seven hundred metres away from the site of the incident.

BJP Manipur has trapped itself in a quagmire of lies after suspended saffron VC Pandey appointed K Yugindro as pro-VC. Armed forces guard pro-VC Yugindro’s life and property now. People of Wangkhei, the locality where K Yugindro stays, have expressed their displeasure on the presence of security forces in their area. Three women organisations, Wangkhei Pujah Lampak Women Welfare Organisation, Chaokhat Khongthang Nupi Lup and Thangapat Mapal Mayai Leikai Women’s Development Association, and two local clubs – Imphal Public Club and Young Voluntary Organisation, passed a joint resolution on the 6th of October that K Yugindro cannot stay in the locality because the armed forces guarding him create insecurity for the residents. Manipur University Teachers’ Association on the 8th of October passed the resolution that it will not cooperate with K Yugindro for using phrases such as “terrorist-like agitators”, “accused criminals of MU”. MUTA has called for a mass leave on the 10th of October against the delay in withdrawal of the FIR and release of arrested individuals.

On the 10th of October, when students marched to the administration block demanding the release of arrested students and faculty members, police attacked them with smoke bombs and tear gas shells. They raided the hostel yet again and arrested 13 more students. Teachers and Staffs associations have condemned the raid and arrests. Manipur High Court on the 5th of October had order the Government to resolve the matter immediately. However, the situation has deteriorated further with the raid and arrests. The High Court on the 11th of October has suspended K Yugindro from the post of Pro-VC and appointed retired IAS officer Jarnail Singh as Pro-VC.

The author is a research scholar at IIT Bombay. Photos are courtesy epao.net.