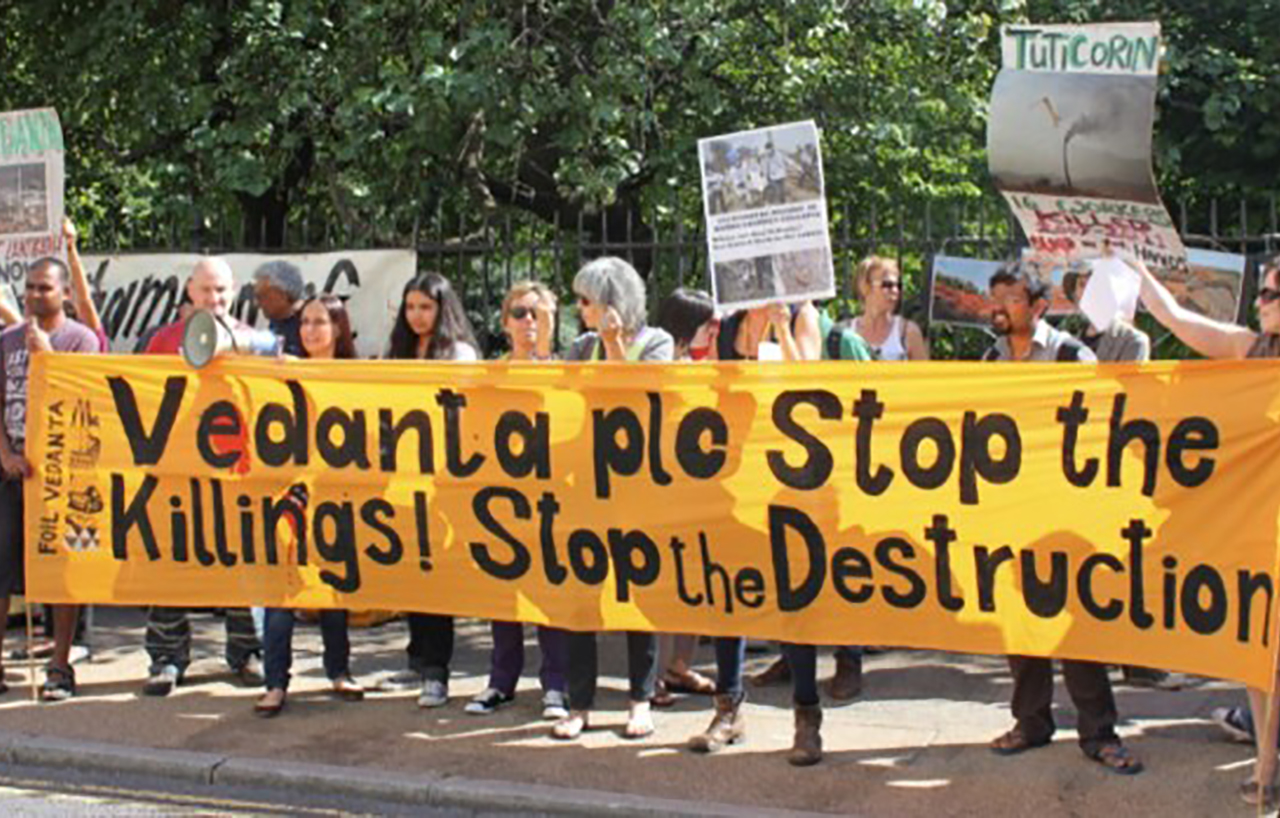 On 27 September 2018, Foil Vedanta and a coalition of organisations in London released a report entitled ‘Vedanta’s Billions- Regulatory failure, environment and human rights’ – days before Vedanta Resources’ AGM and de-listing from the London Stock Exchange. The 32 page report gives a comprehensive account of legal judgments against Vedanta across its global operations, and blames the City of London and Financial Conduct Authority (FCA) for failing to regulate or penalise the company for what it says amounts to ‘corporate massacres’. A report compiled by GroundXero from the press release and report shared by the organisers.

Vedanta Resources Plc is a London listed FTSE 250 diversified natural resources company with a market cap of US$ 2.922 billion (August 6, 2018), controlled and owned by Anil Agarwal and his family with a 66.87% shareholding, and 36 major shareholders with 31.38%.

On 22 May 2018 thirteen people including women and children were shot dead, 217 injured, and nine disabled for life in a police firing during a major rally to mark 100 days of continual protest against Vedanta’s copper smelter in Tuticorin, Tamil Nadu, India. On 24 March 2018 thousands of locals had taken part in a protest against pollution in the town. The tragedy at Tuticorin is the latest in a history of legal violations, human rights and environmental abuses associated with Vedanta, which is faced with protests at many of its operations.

In a press release emailed to GroundXero the organizers said that ‘a protest will be held at the FCA headquarters in Canary Wharf at 11am on 1st October, handing over a copy of the report and demanding that British regulatory authorities do not let Vedanta flee the London StockExchange without being held to account’. They further added that ‘loud protests will be held outside the final London AGM of Vedanta Resources at 2pm on Monday 1st October at the Lincoln Centre, Lincoln Inn Fields, London’. 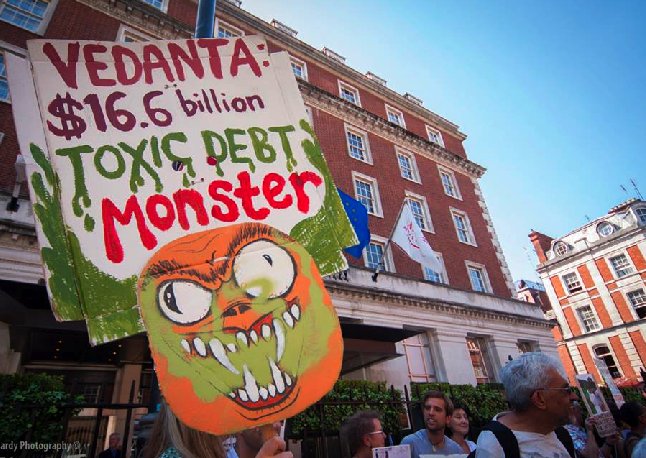 This report ‘Vedanta’s Billions’, released today, focuses on the key violations, with reference to important legal judgments and evidence. Its purpose is to inform governments, parliamentarians, regulatory bodies and investors who may be concerned with the company’s behaviour. It is a summary of legal judgments against Vedanta across its operations, revealing its abusive modus operandi, with special focus on illegal mining in Goa, pollution and tax evasion in Zambia, as well as illegal expansion and pollution in Thoothukudi, Tamil Nadu, industrial disaster at Korba in Chhattisgarh, land settlement and pollution issues in Punjab, displacement and harassment of activists in Lanjigarh, Odisha, and a mineral allocation scam in Rajasthan.

The report is being released days ahead of the company’s final London AGM and General Meeting, at which it plans to formally de-list from the London Stock Exchange. Vedanta’s de-listing plans were announced shortly afterwards the police shooting the protestors in which thirteen people were killed, including women and children, on 22 May this year. The incident ignited global protests against the company and to avoid strict international legal obligations, the company planned to delist from LSE and move its international headquarters away from London.

The report concludes that keeping in mind ‘Vedanta’s track record of human rights, environmental and financial violations, together with its already complicated financial structure, strongly suggests that de-listing is part of a policy to further limit public scrutiny of its operations’.

The report includes a detailed diagram of Vedanta’s corporate structure, as it has evolved over the years, revealing the disproportionate number of shell companies registered in various tax havens, reflecting their opaqueness, contrary to their claim of being transparent. 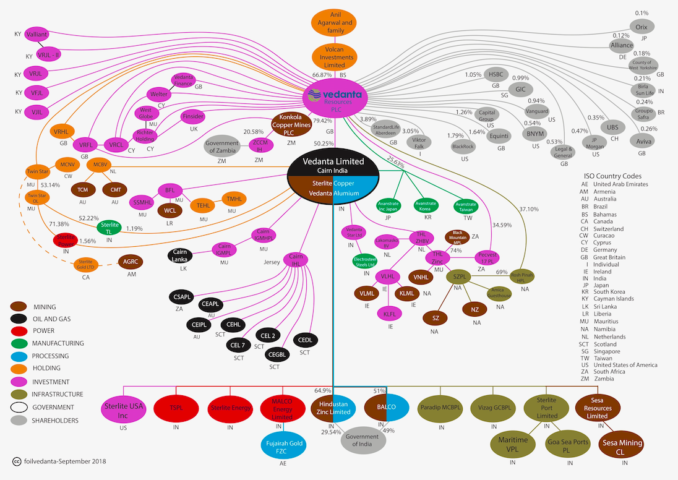 One of Vedanta’s attractions for investors is its, often heralded, low cost operations. This report demonstrates that Vedanta has a consistent modus operandi across its subsidiaries, which includes: operating without appropriate permissions, failing to install or upkeep pollution control equipment, poor health and safety standards leading to a high rate of death and injury, and other corner cutting practices.

Vedanta has been the subject of a number of campaigns by various organisations in the UK since 2003, as well as four Early Day Motions in the UK parliament, and several parliamentary debates concerning its human rightsand corporate governance abuses. Most recently, on 25th May 2018, Shadow Chancellor John McDonnell issued a statement accusing Vedanta of “operating illegal mining concerns, trashing the environment and forcibly evicting local people”.

The Norwegian Government Pension Fund divested in 2007. In 2016 Vedanta asked the fund to reconsider its decision on the grounds that it had improved. However the fund upheld its original decision based on an assessment of four of the company’s subsidiaries: Sterlite Copper, Bharat Aluminium Company, Lanjigarh Alumina and Konkola Copper Mines, and concluded that there was ‘an unacceptable risk that your company will cause or contribute to severe environmental damage and serious or systematic human rights violations’.

Despite these concerns neither the London Stock Exchange nor its regulator the Financial Conduct Authority have investigated or imposed any fines or restrictions on Vedanta since its 2003 listing.

Fatima Babu, from the Anti Sterlite People’s Movement, one of the main groups involved in the protests says:

The people of Thoothukudi are still reeling from the massacre of innocent women, men and children in May, which was carried out in the name of protecting Vedanta’s industry from the people whom it has polluted for so many years. The Tamil Nadu, Indian and British government’s must all take responsibility for the lawlessness and disproportionate power wielded by Vedanta, which led to this tragic event.

We cannot let Vedanta boss Anil Agarwal escape accountability and justice in the UK, under whose jurisdiction he has committed widespread financial, human rights and environmental crimes. The FCA and City of London must now initiate proceedings against Vedanta or remain complicit in enabling and mitigating these abuses.

The protesters in London will demand justice for victims of the massacre of thirteen people at Tuticorin and draw attention to the high profile British and Indian figures who have lent the company support over the years. With powerful politicians and media barons under Vedanta’s influence it will be a tough fight, but the protests will be significant in training the spotlight on their misdeeds and keeping them in the public eye.