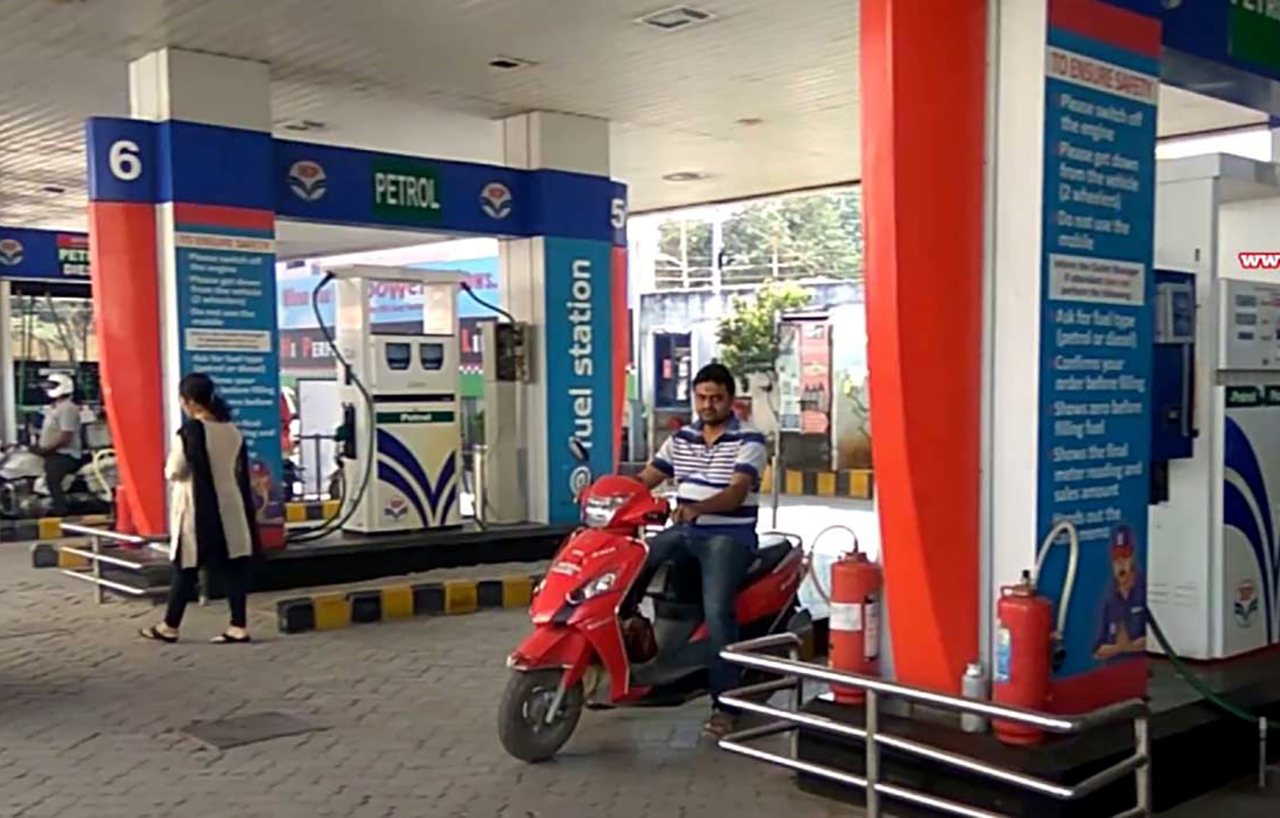 Bring Petrol and Diesel Under GST to Reduce Prices

The Modi government should abandon its policy of high taxation on fuel oil to artificially jack up its retail prices and bring them under GST to curb its sky-rocketing prices. A report by GroundXero.

The regular price hike of petrol and diesel

The frequent price hike for petrol and diesel has been taking place since August in all cities across the country. During the last three weeks, in Mumbai for example, petrol price rose by almost Rs. 4/litre, while diesel price went up by Rs. 3.75/litre. 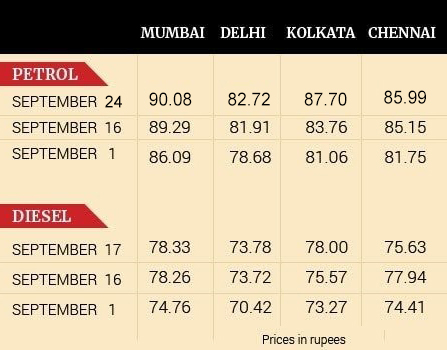 The prices of both petrol and diesel are ruling at all-time high, showing no sign of decline. This unprecedented rise in the fuel prices has led to a massive discontent among the poor and the middle class across the country. While all the opposition parties have blamed the government of being insensitive to the sufferings of the common people and not taking any measures to check the daily price rise in fuel prices, the Modi Government on its part has washed its hands off the issue stating that the fuel prices are determined by the market and governed by international crude oil prices, which are continuously on the rise since early this year. However, a peculiar thing is easily noticeable about the fuel prices, namely, the countries that buy fuel oil from India are selling it at a retail price lower than that of India. The current prices of petrol and diesel in India’s neighbouring countries, which are also net importers of crude oil, are much lower, as can be seen from table below:

Table 1: Retail price of petrol and diesel (per litre) in India and neighbouring countries (in Indian rupee) on September 1, 2018

In 2014, in the run up to the general election, apart from the promise of curing the country from the rampant corruption of the UPA government, decreasing the sky-rocketing prices of petrol, diesel and cooking gas was one of the most significant promises made by the Narendra Modi led BJP in its election manifesto. When BJP was promising this before the 2014 election, the price of fuel oil was record-high in the country. Petrol was priced at Rs. 79/litre and diesel at Rs. 62/litre. The then-ruling UPA government too sought refuge by laying the blame for high prices in domestic market on the rising international crude oil prices. Indeed, it is true that unrefined crude oil had become quite expensive during that period and had touched $109/barrel in May 2014. 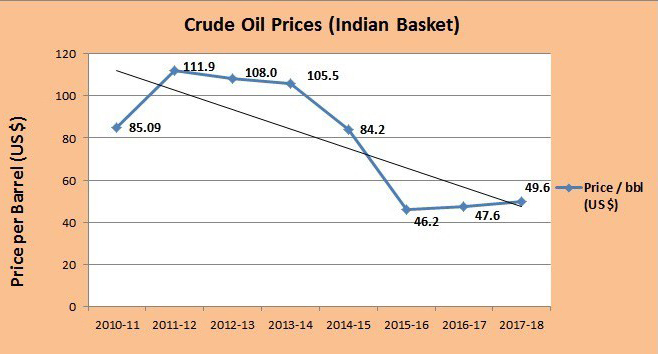 Let us look at retail selling prices of petrol and diesel in Delhi and Mumbai since 2012:

So why retail buyers pay more if international crude oil prices are lower than what they were in 2014-15?

The reason lies in the significant changes in the petroleum pricing and taxation policy in India since BJP came to power in 2014, namely:

Petrol and diesel prices were deregulated with effect from June 26, 2010 (under the UPA government) and October 19, 2014 (under the NDA government), respectively. Presently, oil marketing companies decide the prices of both diesel and petrol, in accordance with international oil prices and currency exchange rate. Also, the Modi government has adopted dynamic fuel pricing since June 2017, whereby retail prices change on a daily basis.

The net result of this policy is that every morning, as we open the newspaper, we discover the daily price of oil – just like gold, silver and other metals, which are traded on international commodity exchanges. Earlier, oil price hikes, announced by the government, would have repercussions in the form of protests from the opposition parties as well as common people. Things have changed now. From January 1 till May in 2018, the price of petrol has increased by Rs. 8/litre and that of diesel by Rs. 9/litre, that is, an average of Rs. 1.5-Rs. 2 per month. This monthly hike has happened without any significant protest, since the price has increased in small steps, by a ‘mere’ 10 paisa, or 25 paisa on a daily basis. Thus, the hike has taken place gradually, without people noticing it.

Now, the oil marketing companies, are exempted from the earlier policy of sharing and absorbing a part of the hike in oil prices in the international market. At present they can pass the entire hike to retail consumers. This along with the adoption of dynamic pricing policy by the Modi government has together managed to help these companies achieve a rapid increase in profit.

In the last financial year, the revenue earning of Indian Oil increased by almost one and half times over the previous year. The three state-owned oil companies – Indian Oil Corporation, BPCL and HPCL – together made inventory gains of over Rs. 12,000 crore in the April-June, 2018 quarter alone as the price of crude oil rallied sharply. Helped by inventory gains, Indian Oil’s net profit increased over 30% to Rs. 6,831 crore from the preceding quarter. The central government too reaped huge gains. It mobilized Rs. 14,575 crore in form of dividend from oil Public Sector Undertakings (PSU).

Not only the public sector oil marketing companies, the private oil marketing companies reaped huge profits as well during this period, especially the three major private oil companies in India – Reliance, Nayara (previously Essar) and Shell India. The business of these three private players expanded two and half times since the Narendra Modi government came to power. Earlier they controlled only 3% of the retail oil market and now they are controlling 8% – as stated by the petroleum minister himself in the parliament. Before 2014, they owned 3000 petrol pumps and now the number has risen to 6000. It is not very difficult to figure out who are benefiting by the petroleum policy changes.

So, the Central government that owns the majority stake in the oil marketing PSUs, the Financial Institutional Investors (both domestic and foreign) holding a large chunk of the equity shares of these companies and a few private players are the ones making a windfall gain at the expense of the consumers from the price decontrol policy of the government.

Fuel Prices in India are excluded from GST framework by the Government of India. The price of petrol and diesel is the sum of the excise duty imposed by the central government, VAT by the state governments, the price of oil to dealers and the commission pocketed by dealers. Price charged to dealers includes crude oil prices and international freight charge based on exchange rate and internal freight charges.

If we look at the excise duty and VAT as a percentage of the retail price, we are presented with shocking figures. In total, while diesel is taxed at more than 70% of the retail value, petrol is taxed over 100%.

Let us take the example of fuel price in a specific state. In West Bengal the total of excise duty and VAT on diesel is Rs. 28.44 and on petrol Rs. 38.96 – about 68% and 104% of the corresponding retail prices.

Table 2: Excise duty and VAT on diesel and petrol in West Bengal

To sum up, the high incidence of taxes to artificially jack up oil prices goes against the very logic of free market and price decontrol propagated by the votaries of economic reforms.

Why is it so difficult for the government to cut taxes on auto fuels? This is because taxes on petrol and diesel are a key revenue source for both the Centre and states. Since 2014, the Modi government has made a substantial revenue mobilization by consistently raising excise duties and not passing on the benefit of low international crude oil prices to the end consumer. The petroleum sector contributed Rs. 18.1 lakh crore between 2014-15 and 2017-18 through taxes and dividends (according to data from Petroleum Planning and Analysis Cell), of which Rs. 11 lakh crore went to the central exchequer and Rs. 7.1 lakh crore to the states exchequer. The Centre mopped up Rs. 2.29 lakh crore from excise duty on petroleum products in 2017-18 and Rs. 2.42 lakh crore in 2016-17. States’ earnings through sales tax/VAT on petroleum products increased to Rs. 1.84 lakh crore in the same period.

Further, an analysis of the Centre’s oil-tax gains shows that it was not channeled into capital expenditure spending (that is, on infrastructure) but instead was mostly spent on boosting its revenue earnings to bridge the fiscal deficit.

India is the third largest importer of crude oil. The rising international oil prices are inflating domestic oil costs in a strong demand environment. Brent, the benchmark for half of the world’s oil, rose to USD 80/ barrel from USD 70/barrel in the last five weeks. During the same period the Indian Rupee fell by 5-6 percent against the dollar, resulting in more expensive crude imports.

Further, with USA-China trade war getting more intense, and with USA president Trump, adamant in his stand on imposing trade sanctions against countries importing oil from Iran (the third largest oil producer in OPEC), after November 4, there will be more pressure not only on the already weak Indian rupee versus US dollar but also on the global crude oil prices.

Under such circumstances there is a growing demand from the opposition parties and a section of economists that it is time the government brings these products under the Goods and Services Tax (GST) to mitigate common people’s sufferings. Many argue that instead of using petrol and diesel as the milking cow to raise additional revenues to maintain fiscal deficit, the government should focus more on measures to increase and widen the direct tax net to meet its revenue mobilization target.

If petrol and diesel are brought under GST, their retail prices will fall considerably. Even under the highest 28 per cent tax slab under GST, the petrol and diesel would cost only about Rs. 50 per litre. The revenue losses on this count can be offset by curbing wasteful government expenditure and mobilizing higher direct taxes including corporate taxes. This government has already provided tax incentive to the tune of 1.7 lakh crore to the corporates in the last two years.