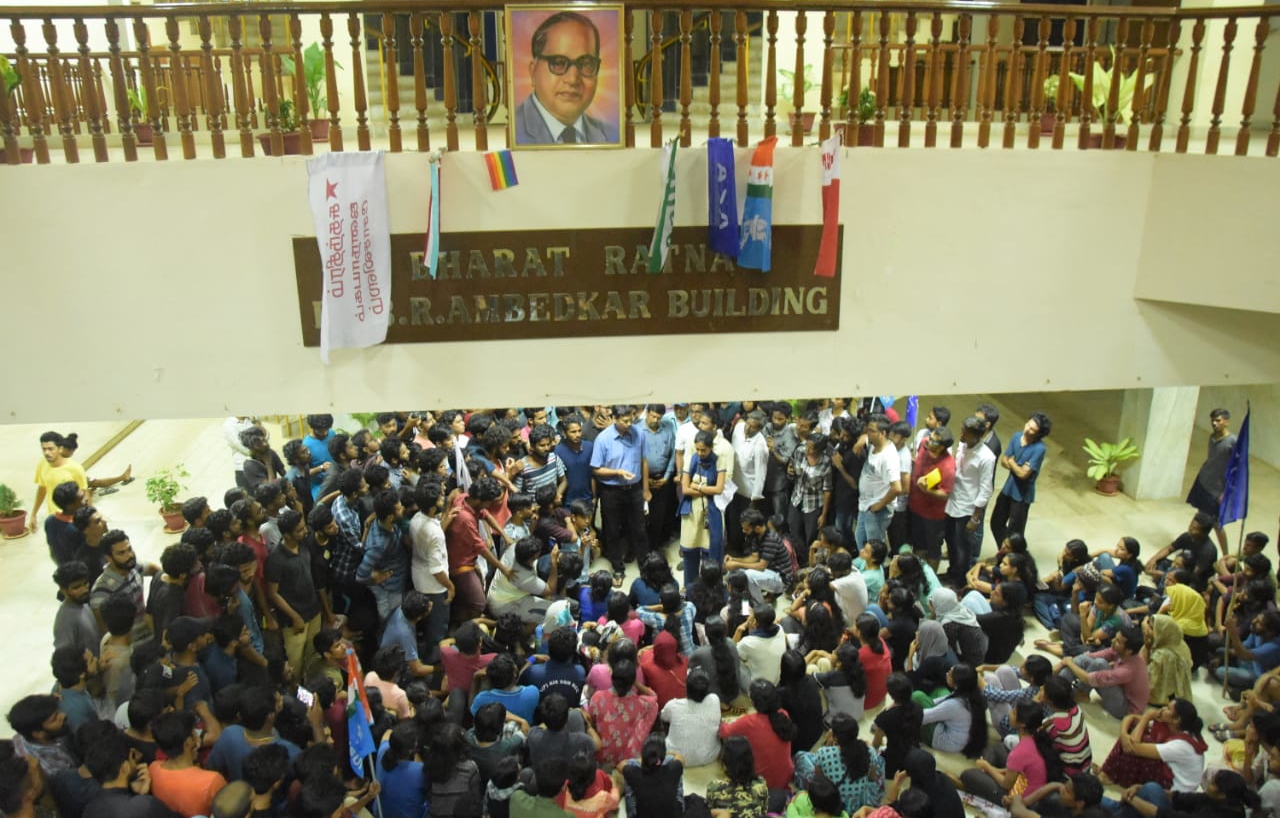 Students in Pondicherry University Resist Attempts to Saffronize the Campus

Prior to NAAC visit Pondicherry University authorities put up pro-Hindu propaganda boards in student hostels. The students took them down and resisted the saffron agenda. A GroundXero report.

Since yesterday, over 400 students in Pondicherry Central University had gone on indefinite class boycott accusing the university administration of promoting saffronization of education. This was a major decision defying the administrative ban on any gathering inside the campus after 6:30PM. This ban was implemented by a circular passed by the university administration on 26th July, this year. The only exception ever made was for the freshers’ meet organized by Akhil Bharatiya Vidyarthi Parishad (ABVP), the students’ wing of RSS. Today the Vice Chancellor finally agreed to the rights claimed by the protesting students.

In 2014 the students and faculties in Pondicherry University resisted a ‘political’ appointment of the Vice Chancellor. Protests erupted in solidarity across campuses that led to the sacking of VC Chandra Krishnamurthy by President Pranab Mukherjee over the charges of plagiarism reported by the HRD Ministry. This was the same period when several politically motivated appointments were being made by the BJP government in various universities. While the appointment in FTII Pune, Hyderabad and JNU met with resistance and made it to the national media, there was a flurry of such appointments in several central universities such as Orissa Central University, Rajasthan Central University, Maulana Azad National Urdu University (Hyderabad), English and Foreign Languages University (Hyderabad), etc. that took place in silence and remained unaddressed.

Tension was brewing for some time now in Pondicherry University over the unavailability of nutritious food, access to hygienic drinking water, access to WIFI connection and safety of women students inside the campus. For the last two weeks a lot of effort was being made by the administration to tear down the ‘problematic’ posters, paint the already clean walls and put up shiny boards in all hostels in order to please the NAAC members, who would visit from 18th September, 2018 for three consecutive days. The students were dictated to be disciplined during the auditors’ visit. It is an infamously well-known practice by administrations across universities during such accreditations to clean off the footprints of mismanagement and corrupt practices. 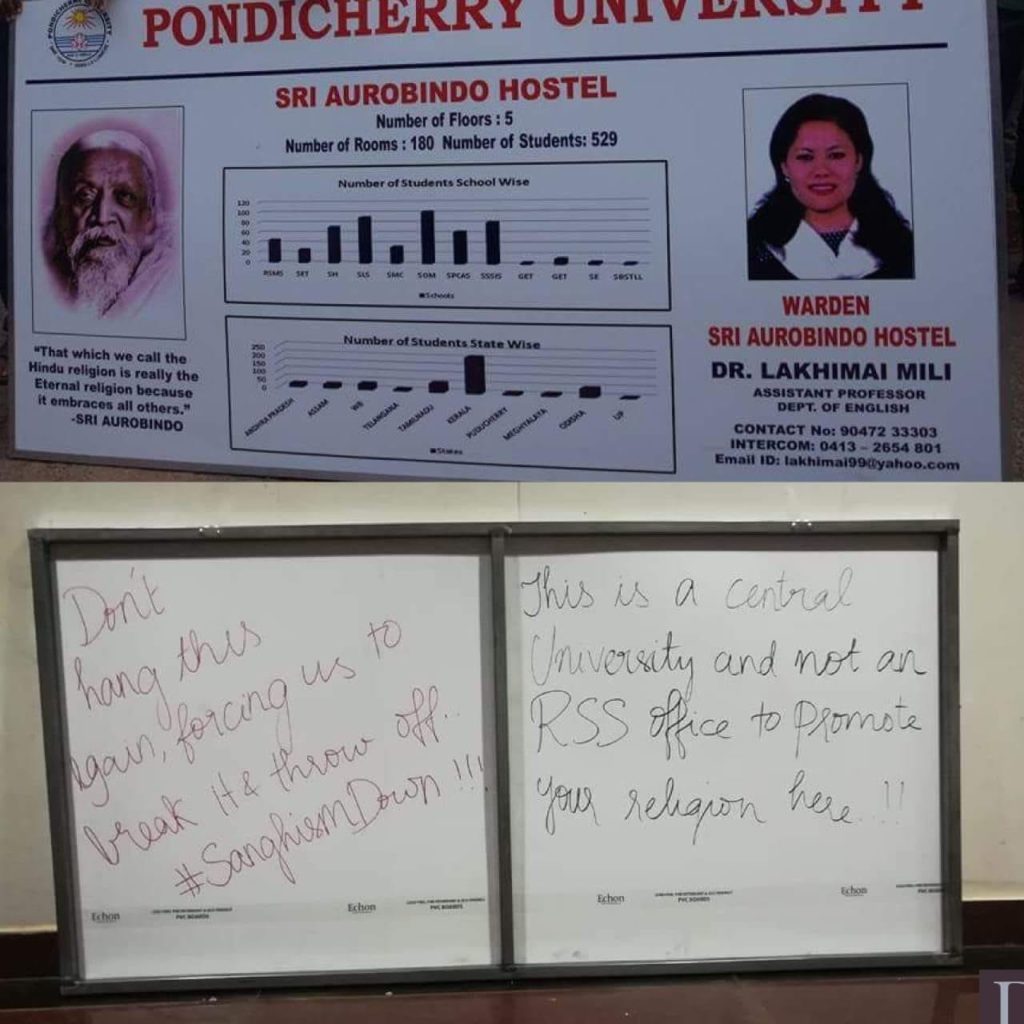 The propaganda board in Aurobindo Hostel and the students’ reaction

The students began to protest as the authorities put up quotes of Aurobindo Ghose praising Hindu religion in the Aurobindo Hostel, as part decoration for the NAAC visit. As a reaction to this, students put up a board saying: “Don’t hang this again, forcing us to break it & throw off. #Sanghism Down!!! This is a Central University and not an RSS office to promote your religion here!!”  Another quote of Valmiki praising Ram (characters from Hindu mythology), was put up in the Valmiki Hostel. 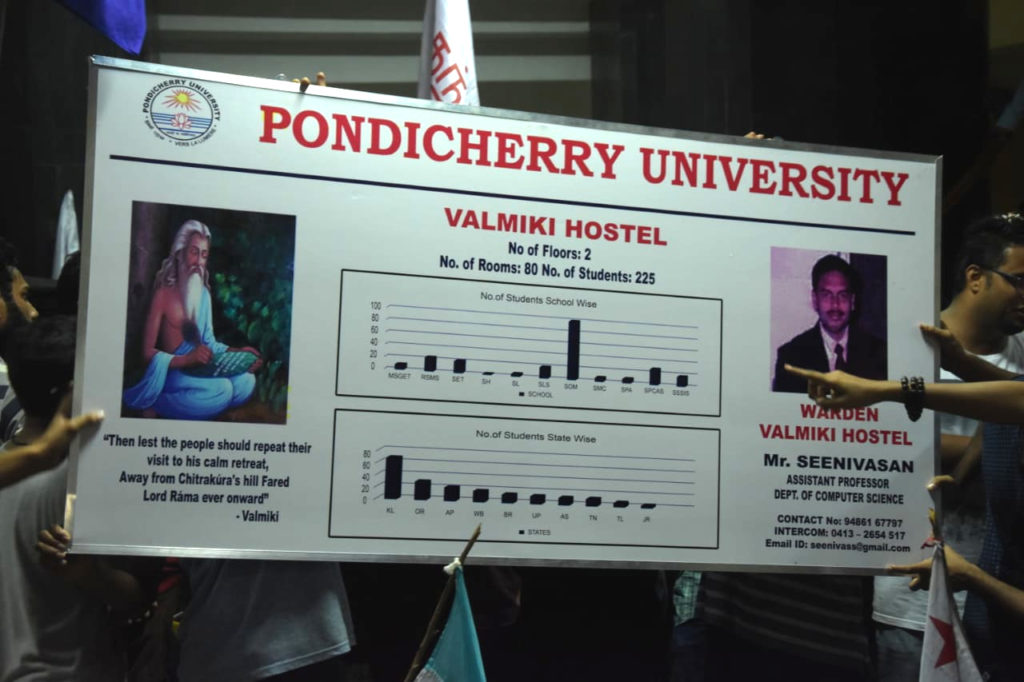 Students taking down the propaganda board in Valmiki Hostel

Yesterday, progressive students and several political organizations (except ABVP) formed a committee named Students Action Committee and started protesting based on a 14 point demand. The negotiations of the students’ representatives with the Registrar ended without a resolution. The students were resolute that if the demands were not met they would gherao the VC as well as the rest of the administration section. However today, the meeting between the VC and the students’ representatives yielded result and the VC reportedly agreed to the demands. He also mentioned that in few weeks’ time, Gender Sensitization Committee Against Sexual Harassment (GSCASH) would be set up. There have already been several cases of harassment in the campus. The women students have been voicing their concern regarding the lack of an institutional mechanism addressing these issues and carrying out gender sensitization programs. 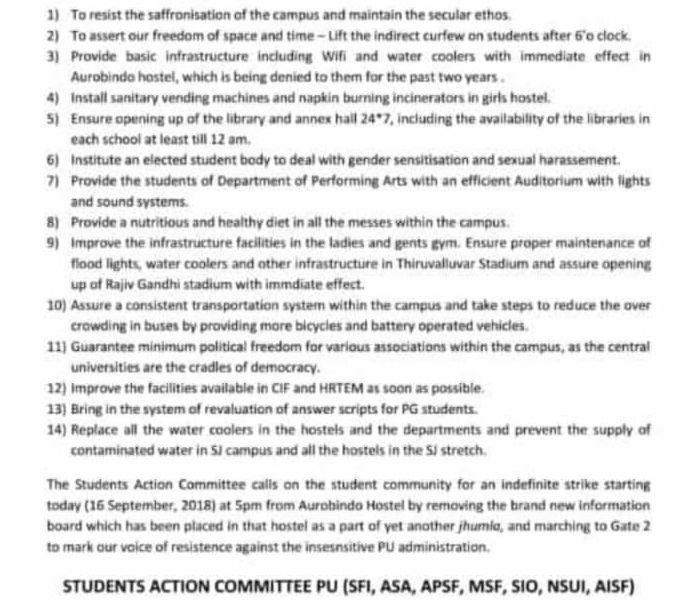 The 14 point demand on behalf of the students

Previously, students from Pondicherry University protested in solidarity with the professor and students of Kerala Central University (KCU), who took pledge to resist saffronisation of education. In reaction to the protest, the KCU administration took vindictive actions against the students and professors who criticized the despotic acts of the authorities. Ganthoti Nagaraju, a Dalit Student activist was arrested on 6th September for breaking the glass-cover of a fire alarm. On 7th September, Prasad Pannian (Head of the Department of English and Comparative Literature) was arrested for publicly criticizing the administrative action against Nagaraju. The pro-VC K. Jayaprasad, the Kerala Vice President of the Bharatiya Vichara Kendram (a think-tank affiliated to the Sangh Parivar) insisted that no student or teacher had the right to criticize any “collective decision” taken by the university.