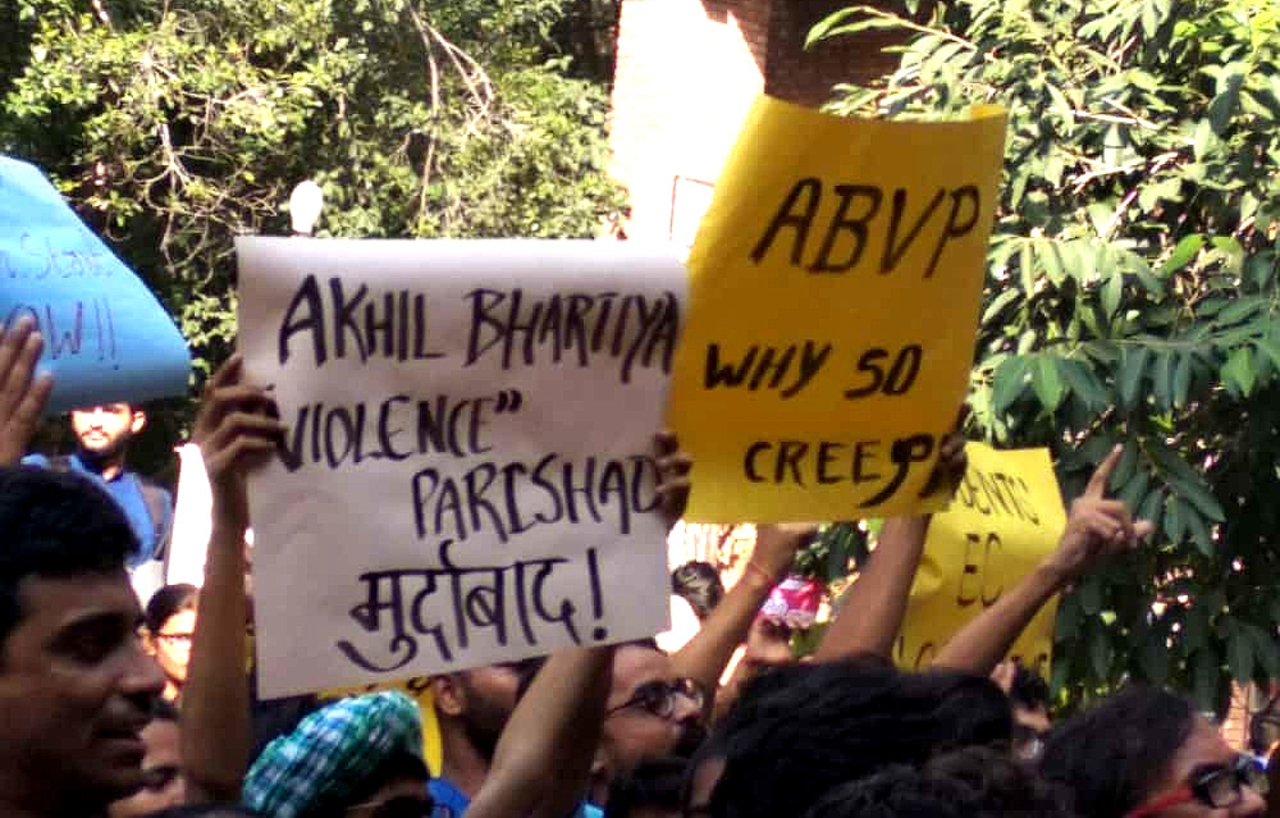 The very next day after the JNUSU elections see the larger voter turnout in 6 years, ABVP activists disrupted the counting of the polls throughout the day, allegedly resorting to violence on multiple occasions, specifically targeting anti-ABVP student activists. Several students have been beaten up, alleged ‘outsiders’ with canes have entered the campus, and the democratic students of JNU are calling out to the media to cover how the idea of democracy is under attack yet again, right now, in JNU. Amardip Kumar Singh writes from JNU.

After 15 hours of deadlock, the counting process of the Jawaharlal Nehru University Students’ Union election has finally resumed at 6 pm today. The counting process was stopped in the early morning hours when some the members of Akhil Bhartiya Vidyarthi Parishad (ABVP) barged into the poll counting venue.

Since then multiple attempts have been made at creating a dialogue with concerned parties to solve this deadlock situation, so that the counting process could be resumed.”

Through the whole day, the students community, divided into two camps: ABVP and non-ABVP, were seen sloganeering against each other. Earlier in the day, a joint statement was released by all the organisations except ABVP condemning the hooliganism. It further added, “ABVP members such as Saurabh Sharma, Raghavendra Mishra, Akhilesh Pathak and some ABVP candidates like Lalit Pandey (ABVP Presidential candidate) and Venkat Choubey (ABVP Joint Secretary Candidate) entered the SIS-I building, broke glasses of doors and barged into the rooms were counting was taking place. After this, they laid siege to the rooms and prevented anybody from entering or leaving the rooms. They even tried to capture the ballots, which the EC managed to prevent. They manhandled and injured some EC members. The ABVP’s acts constitute a serious violation of the election process. The ABVP by indulging in violence has not only disrupted the counting process but also sought to undermine the sanctity of the student EC whose decision is abided by all organisations.”

The students are concerned that if the counting process is not completed by Monday, then as per the Lyngdoh Committee recommendations, this election might be invalidated. In all this, the administration nominated body GRC (Grievance Redressal Cell), which oversees the election process, failed to intervene effectively until students from across the political organisations gathered in front of the School of International Studies and stood with the demand to resume the counting process immediately.
However, the situation is still tense as the police and RAF are posted at the JNU main gate and ABVP supporters from DU continue to enter the campus.

Yesterday, on September 14, 2018, the polling process was successfully executed by the EC in the well cherished democratic environment of JNU. The counting began on the same day of polling at 10 pm. Before the counting was stopped, out of the 9 councillors declared to have been elected, only one councillor is affiliated to ABVP. 67.8% polling was recorded this year which is the highest in the last six years. The final results are expected to come tomorrow, unless some unwanted activity takes place again.

According to latest updates received from various sources at the time of publishing this report, former JNUSU General Secretary Satarupa along with three other student activists – Ruma, Sayan and Sumitran – were beaten by masked men, allegedly gathered by the ABVP. They had just returned after lodging a complain at Vasant Kunj police station about the violence yesterday during the counting. Sumitran was attacked physically earlier in the day as well, signalling targeted attacks on specific student activists. Many outsiders have reportedly entered the JNU campus with canes, provoking and intimidating students, though police force and RAF are posted at the main gate. The focus seems to be disruption of the vote counting process.

The author is a student at JNU. Photos are courtesy author.