After his release from Saharanpur jail, Bhim Army chief Chandrasekhar Azad has spoken out against the BJP and has appealed to everyone in the country not to vote for BJP in 2019 under any circumstances. A GroundXero report.

Earlier today, NSA charges against Bhim Army leader Advocate Chandrasekhar Azad Raavan were dropped by the UP Government, and he was released unconditionally from prison, after 15 long months of incarceration. Chandrasekhar was arrested last year by the Yogi Government on charges of ‘rioting’ in the context of the violence that took place in Saharanpur in UP (in May 2017) when organised armed Rajput gangs attacked dalit households in Shabbirpur village, defiled the local Sant Ravidas temple, destroyed property, injured people, and set several houses on fire. Chandrasekhar was picked up from Dalhousie in neighboring Himachal Pradesh on 8th June 2017. After the High Court had in fact rejected the rioting charges as politically motivated allegations and granted him bail, within a day he was slapped with the notorious National Security Act by the Yogi Government, and had remained in jail since. The Allahabad High Court, on 28th July this year, had extended the incarceration of Raavan under the NSA, by 3 months. This release comes even as the Saharanpur district magistrate had submitted an adverse report two weeks ago against Azad. The UP Government order also said that Azad’s two aides, Sonu and Shiv Kumar, from Badgaon in Saharanpur, would also be released ‘prematurely’ ahead of their term completion on October 14.

Several speculations have been making rounds regarding this so-called ‘premature release’ of a significant leader of an anti-caste movement in the present times. While it is in-fact a much delayed release since the NSA was both invoked and extended in legally untenable ways, it is the timing of the release that is notable. These are the times when the State and Central Governments seem to be out for blood when it comes to those fighting against oppression of dalits, minorities and other marginalised sections in the country. According to Raavan himself, “Government was scared that they are going to be rebuked by the Supreme Court, they ordered an early release to save themselves”. The Bhim Army leader’s mother had earlier filed a petition in the Supreme Court against the Allahabad High Court orders of extending the custody of Raavan. The Bhim Army, and other activists and lawyers who followed the case closely, have maintained throughout that the basis for the NSA charges against Azad were too ‘flimsy’ for any kind of conviction. Many believe it was only a matter of time before the SC would dismiss the charges. “Keeping the current situation in mind, the government is taking a sympathetic view and is directing the Saharanpur administration to release him with immediate effect,” the UP government’s order said. Azad has dismissed any “generosity” on the part of the Government. “I have been denied medical treatment in jail for 8 months, they would not allow anyone to visit me, my people were tortured, I was tortured in jail, I was given dry rotis to eat – I know how “generous” they are. Whatever “generosity” they showed me, I promise I will return it to them with interest,” he said. Talking about the Saharanpur violence, he said “basically their problem is they wanted to spark riots between dalits and muslims on 20th April by taking that rally through areas for which they did not have the permission. BJP MPs were part of the rally. We did not let the riot happen. That’s why they are frustrated. We said this is not our fight, Dalits and Muslims are brothers. They did the same thing in Muzaffarnagar, where they used jats against the muslims. We did not let them repeat that here. That’s what angered the RSS. That’s why they arrested us.” 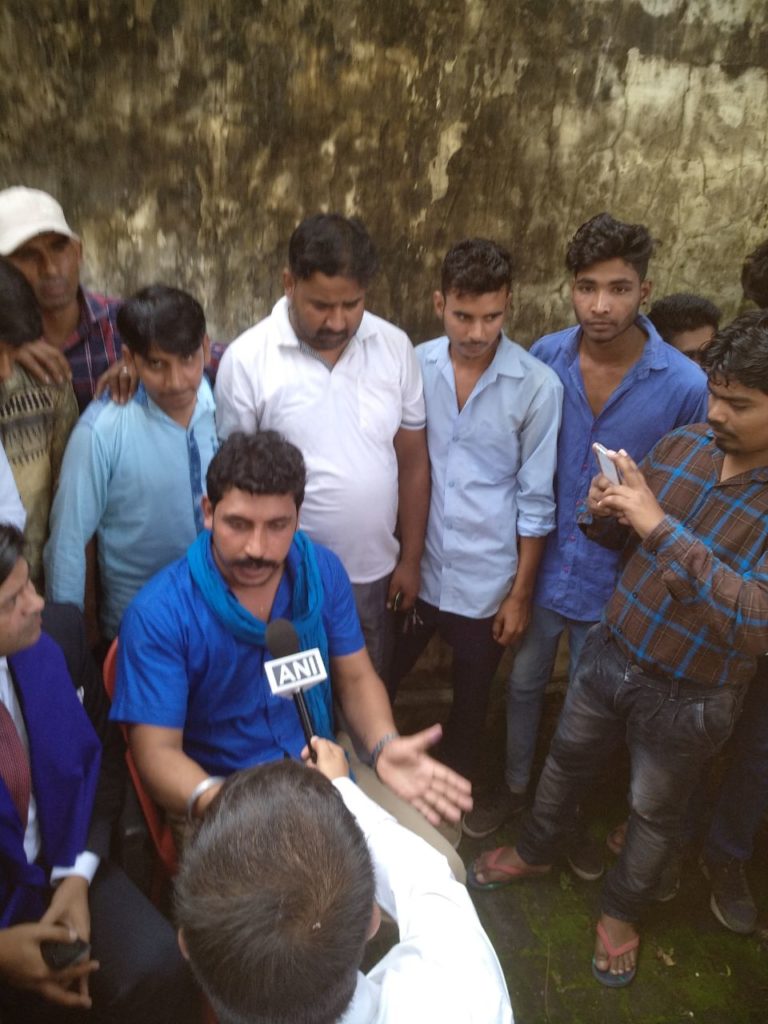 Bhim Army as an organisation has been lately going through interesting political twists and turns. Recently, Advocate Jai Prakash, ex-National Vice-President and National Co-ordinator of the Bahujan Samaj Party, joined the Bhim Army on August 19, after being expelled by Mayawati for calling Rahul Gandhi a “foreigner”. Incidentally, in the same public speech where Jai Prakash made this comment about the Congress leader, he also went on to ridicule the Bhim Army. Earlier, during the Kairana and Nurpur by-poll elections, the Bhim Army had pledged broad social support for the opposition candidates from SP, BSP, RLD, and many including the RSS have held the organisation as the chief reason for BJP’s defeat in these elections. Over the subsequent months, Bhim Army units only kept growing in number across western UP particularly, but also across the state generally and into other states as well. In this context of growing significance of the movement, subsequent forays by ruling class parties into a largely social anti-caste movement, that the “sympathy move” of releasing Raavan have raised eyebrows regarding intentions of the Yogi Government behind this move. This is the same Government which has established it’s notoriety beyond any doubt regarding illegal arrests, mob lynchings and extra-judicial killings that it calls ‘encounters’ when it comes to matters related to dalits or muslims.

It is noteworthy that the recent relations between the Yogi Government and the Supreme Court, have been fraught with tensions, to say the least. On 11th September, the Supreme Court directed a magistrate in Gorakhpur “to pass appropriate orders” on the petition seeking prosecution of Chief Minister Yogi Adityanath, alias Ajay Mohan Bisht, in a 2007 alleged hate speech case that led to the infamous Gorakhpur riots. Yogi was the MP from Gorakhpur then. The Chief Judicial Magistrate had ordered prosecution of Yogi in 2009 after the local police filed chargesheet. But the CJM’s order was challenged in the Sessions Court, which subsequently quashed the order. The petitioners then moved the Allahabad High Court. Meanwhile, in May 2017, after Yogi had taken over as the CM of the state, his home ministry (headed incidentally by Yogi himself), refused to grant sanction to prosecute Yogi. In February 2018, the High Court upheld the Gorakhpur sessions court order which had quashed the magistrate’s order. The High Court order was then challenged in the Supreme Court. On 20th August this year, the SC had issued notice to the Uttar Pradesh government on a plea challenging the Allahabad High Court’s decision. Interestingly, not only are there video recordings of the inflammatory speech spewed by Adityanath, but in fact he himself agreed to have given such hate speech in the television chat show “Aap ki Adalat”. 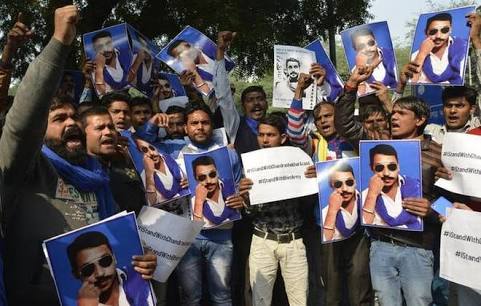 Such tensions in the Yogi regime regarding it’s future legitimacy, together with the growing anti-RSS anti-BJP discontent and anger across the state, led in part by organisations such as the Bhim Army, and the Opposition parties’ efforts in making inroads and cozying up with such movements, are pointers to the electoral calculations the Government is negotiating with, building up to the elections. Another aspect of this is the relation between the Bhim Army and BSP. While many of the Bhim Army members have been historically voting for the BSP, and unless something changes drastically in the upcoming months, are going to do so in the upcoming polls, the BSP Chief has consistently stood in opposition to the organisation, including describing it as a “product of BJP”. In such a situation, the release of Azad might be an attempt on the part of the ruling party to add to the political headache for Mayawati – with the hope of creating faultlines within the dalit constituency. Raavan, however reportedly said after being released, “I would like to urge all the Dalits to fight for their rights, no matter if they have to take to streets. Dalits should be ready to take what is given to them in the Constitution. I will continue to urge people to uproot this dictator BJP government”. He assured that he has no differences with Mayawati, and that the BSP chief had been “fighting hard for the rights of Dalits and I salute her”, and that his main focus right now is to defeat BJP-RSS in 2019. He also maintained that Bhim Army is an independent organisation with an independent ideology, and is not connected with any political party. When asked about his thoughts on fighting in the 2019 elections, he said “chunav Chandrasekhar nahi ladega (Chandrasekhar won’t fight elections)”, without batting an eyelid. At the same time however, adding that Bhim Army would work to create awareness among voters about fascism, and ask everyone to vote for the better candidate – particularly those that can defeat the BJP. “BJP is the primary threat today to our Constitution”, he said. “The Constitution of this country was burnt down in public, in Parliament Street. And nothing has been done to those who did such a thing. This is the book the country is run by. And then the same Government says they are Constitutional, and dalit sympathizers. It is the Constitution which finally freed dalits in this country. They were slaves before that. You can not hope to run your Nagpur system here, because we will not let you do it,” he said, referring to the RSS which is head-quartered at Nagpur. He said Bhim Army will keep pursuing the cases related to the Saharanpur violence, Una violence, and the atrocities done to dalits in this country under the present regime.

Given that the Bhim Army leaders have gone on record to declare support and solidarity to anti-Hindutva struggles happening across the country, whether Ambedkarite, left or democratic struggles, this move by the UP Government is seen by many as a desperate attempt on the part of Manuvadi forces to put up a facade of ‘sympathy’ for dalit constituencies, and separate out the anti-caste Ambedkarite forces from other left and democratic movements who can be kept behind bars under tags such as “urban naxals”. Many have started raising demands for the arrests of those who were in fact responsible for the Saharanpur violence – now that the Government has admitted that the Bhim Army had nothing to do with the so-called ‘riots’ (with connotations of there being two comparable sides rioting against each other). 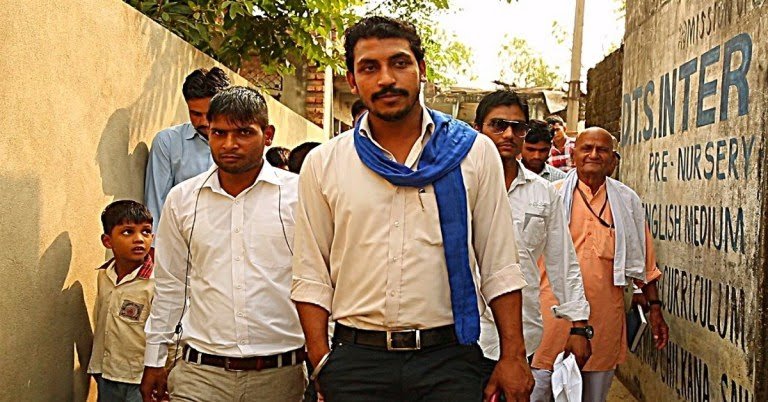 In the early morning hours of Friday, the Bhim army chief came out of prison into a heroic welcome right outside by members of his organisation, who had gathered in huge numbers since Thursday night. “The fight has just begun against the people who have misused the government machinery. The protest of April 2 was non-violent, but how did 11 people die? The BJP is like a double-mouthed snake. They can’t be trusted. Everybody is facing atrocities barring capitalists,” Azad told the media outside Saharanpur Jail. Saying that he would have taken back to the streets two months later anyway after the Supreme Court would have granted him bail, but he is happy that he got two extra months to work for the movement. “I don’t mind going back to jail again, or even getting hanged,” said Advocate Chandrasekhar Azaad Raavan, “now that our people have become conscious, this movement can not go back, and we must work hard for it”.