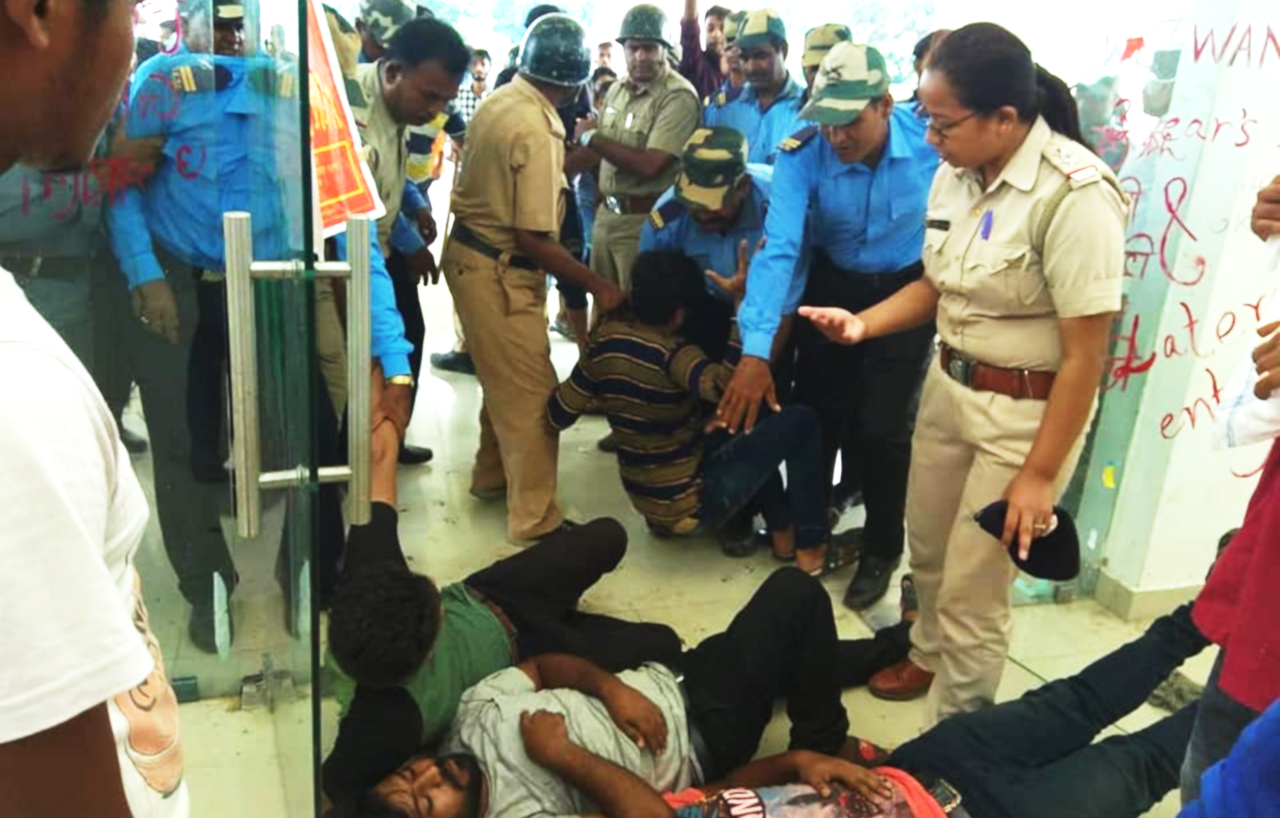 Over 800 students of Gani Khan Chowdhury Institute of Engineering and Technology in Malda are setting an example by refusing to give in to the fraud performed by the institute authorities that ruined their career and life. Over the last two years they built a resilient protest and despite the lack of support and recognition as well as repeated brutal physical and psychological repression, consistently kept at it. Yesterday, they were attacked once again by the pet police and goons of the ruling party of West Bengal. A GroundXero report.

Imagine a central government engineering college inaugurated and by ex PM Manmohan Singh and on various occasions visited by high profile dignitaries which include Sonia Gandhi and Pranab Mukherjee. Imagine enrolling yourself into such an Institute for a six year integrated course right  after your 10th boards exams and the Institute promises you a B.Tech degree certificate at the end of those six years. Now Imagine, after having completed the six years course with a certificate in hand you are trying to look for jobs or continue with your education and then you realize that your degree certificate is invalid, that your Institution has no affiliation and that as per the education system of our country you’re still technically someone who has just passed their matriculation!

This has been the fate of over 800 students of Malda’s GKCIET (Gani Khan Chowdhury Institute of Engineering and Technology) who have been fighting against this betrayal for over 3 years now. They have held rallies, demonstrations, conventions, gone on hunger strikes but have always been turned a deaf ear to by the GKCIET authorities and the State and the Central governments. However, even after being ignored for so long, after being beaten up repeatedly by goons during their protests, they still haven’t given up.

Yesterday, once again, the students faced brutal attack from the combined force of the police and ruling party goons. As the students planned to escalate the protest in support of their demand for valid certificates, the local goons allegedly belonging to TMC and aided by the Institutes administration entered the campus and beat up the students.

Students from this MHRD affiliated institute have been agitating for last two years. In 2016, the first batch of passed out B. Tech. students came to know that their course certificate was invalid. Since 2010, GKCIET had a 6 year modular course according to which students took admission after completing class 10 examination. The institute website describes the course as: “flexible, modular, credit based multipoint entry programs in engineering and technology.” The course comprised of 2 years of vocational course (1st level), 2 years of diploma (2nd level) and 2 years of B. Tech course (3rd level). Besides Malda, in West Bengal where the Institute is located, a lot of students come from the villages of Uttar Pradesh, Arunachal, Meghalaya and Manipur to study in this institute. Most of the students are first generation learners hailing from the marginalized background, dalits or schedule caste.  After being granted an invalid certificate many of them left but along with the local students, a few stayed back to call out the fraud. In 2017, forced by the students’ protest and formation of the independent student union GKCEIT Student’s Unity, the MHRD declared that certificates would be granted under the affiliation of NIT, Durgapur. Much like their previous promises, this too never materialized. Instead, in December 2017, cases were filed against four of the protesting students in non-bailable charges. The constant protests forced the West Bengal government to declare that the B. Tech. degree would be certified by Maulana Abul Kalam Azad University of Technology (MAKAUT), Diploma would be certified by All India Council for Technical Education (AICTE) and from 2018, admission for Diploma would come under JEXPO and the B. Tech. admission would come under WBJEE. The students later found out that the problem was far from over as this new notification was only meant for students admitted in 2018. So the certificates of the students who have already completed the modular course from 2010 to 2016 were trashed. 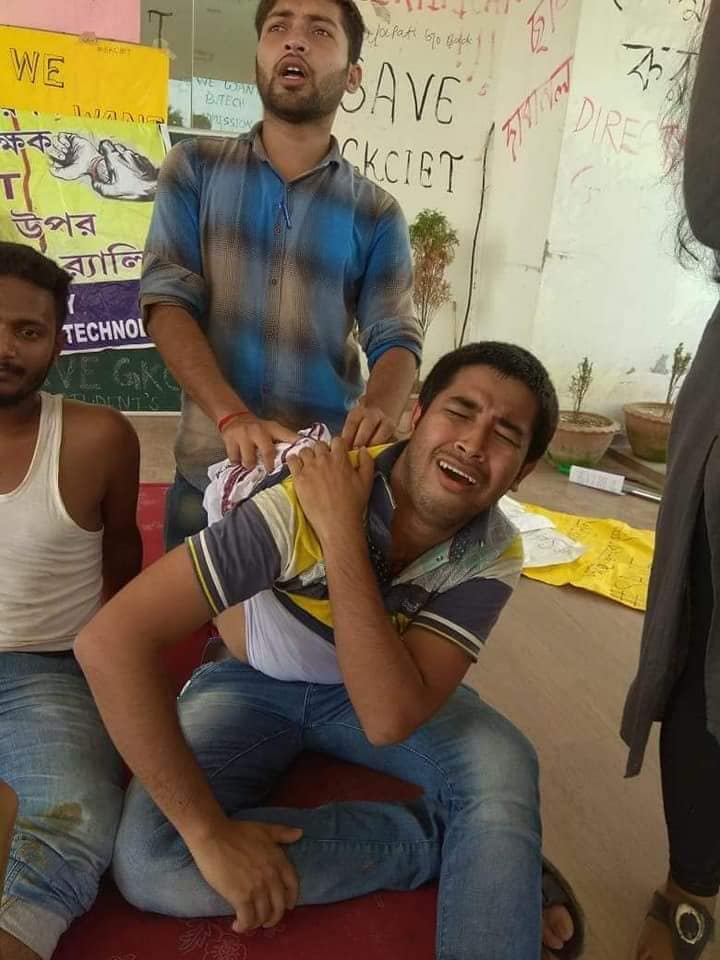 GKCIET students injured at the hand of police and goons

For last 32 days many students from the Institute are camping at the Ranu Chhaya Mancha at Academy of Fine Arts (Kolkata) with the demand for a valid certificate and admission in the B. Tech. course. After more than a month of resilient protest, once they started building up solidarity with larger students bodies, the government was forced to take into account their demands. On August 29, a gazette notification was published by the MHRD which stated that the 1st level of the modular course was equivalent to Intermediate 12 class, 2nd level of the course equivalent to 3 year Diploma in engineering and the 3rd level of the course equivalent to B. Tech (4 years). The notification further mentioned, “The 3 year Diploma & 4 year Degree awarded by GKCIET will be recognized by West Bengal State Council of Technical & Vocational Education and Skill Development (WBSCT&VE&SD) and All India Council for Technical Education (AICTE) respectively.” But there is doubt and distrust among the student about the MHRD notification as it remains unclear about what would happen to the students who have already passed out under the modular program.  None of the courses in question are of either 3 year or 4 year duration. So, who is the affiliating authority of these courses? The affiliation cannot surely be done by GKCIET as it is not an autonomous institute.

Meanwhile on September 6 in a huge protest rally the students went to Raj Bhaban and six student’s representatives met the Governor of West Bengal, K.C. Nath Tripathi with their demands. The Governor ascertained to communicate the issue to the GKCIET administration and MHRD. On September 11 the students planned to visit the MAKAUT campus (previously known as WBUT campus) in order to get a clarification if their Diploma was valid for getting admission in B. Tech. course under WBUT.

As the students’ struggle intensifies both in Malda and in Kolkata, the administration is trying to intimidate the students back in GKCIET campus in Malda. Yesterday morning, the Trinamool Congress goons aided by the GKCIET administration attempted to disrupt the protest in the campus. While resisting their entry into the campus, Soumadeep, a first year B. Tech student got severely injured. The goons were armed with blades and sticks. In the presence of the police, they beat up and man-handled the female students inside the campus. One of the goons, Sajid Ahmed, reportedly dared the students to complain to the police and stated that he would like to see if anyone had the audacity to arrest him. Amidst such despotic brutality the students maintained peace and appealed to the authorities to take action against the outside goons.

The ruling party leaders and the institute officials should understand by now that the students who have been fighting tooth and nail for two years and has been duped repeatedly will not back off so easily. The institute authorities and the governments should also take note of the fact that the month-long protest under the open sky in this peak monsoon season, the health of the students is deteriorating, and the responsibility of any mishap would lie with the administration only.

Even though they continue to be ignored by all authorities, the spirit and solidarity of the students to fight against the grave injustices being done to them is only growing stronger, as they are building new ties with larger student bodies. The GKCIET students’ slogan resonates the air, “Either we will return home with valid certificate, or our dead bodies will.”