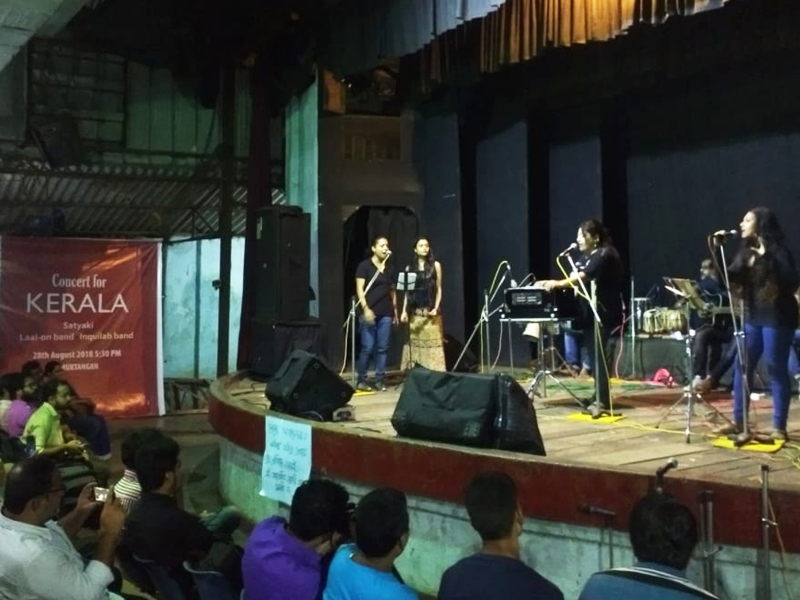 Concert for Kerala : An Evening of Music and Solidarity

As Kerala faced horrifying floods, many ‘hindutva’ groups and their ideological followers in social and mainstream media started propagating hate against residents of the state – discouraging financial contributions and other forms of support to the ‘beef eaters’. The Modi Government, the entire central administration and the Delhi-centric ‘national media’ were so busy in creating a political spectacle and nationalist fervour out of the demise of the ailing ex-prime minister Atal Bihari Vajpayee that only after the TRP from live telecast was fully milked did they turn their attention to the flood situation in Kerala. PM Modi visited the state, made a customary aerial survey and announced an inadequate fraction of the finance needed. A bizarre controversy erupted over UAE offering more than the central government in aid and New Delhi refusing to accept the aid. Contexts such as these give a different urgency to efforts by regular members of the society as they stand beside those in Kerala. 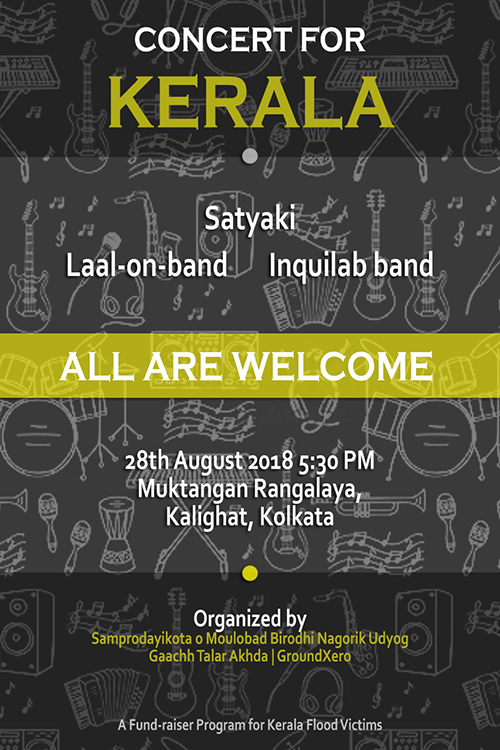 GroundXero published a call for the West Bengal government to at least take note and make urgent arrangements for return of the many migrants from the state working in Kerala. A fundraising ‘Concert for Kerala’ was planned and organised in Kolkata by Samprodayikota O Moulobad Birodhi Nagorik Uddyog and Gaach Talar Akhda in collaboration with GroundXero on 28th August. 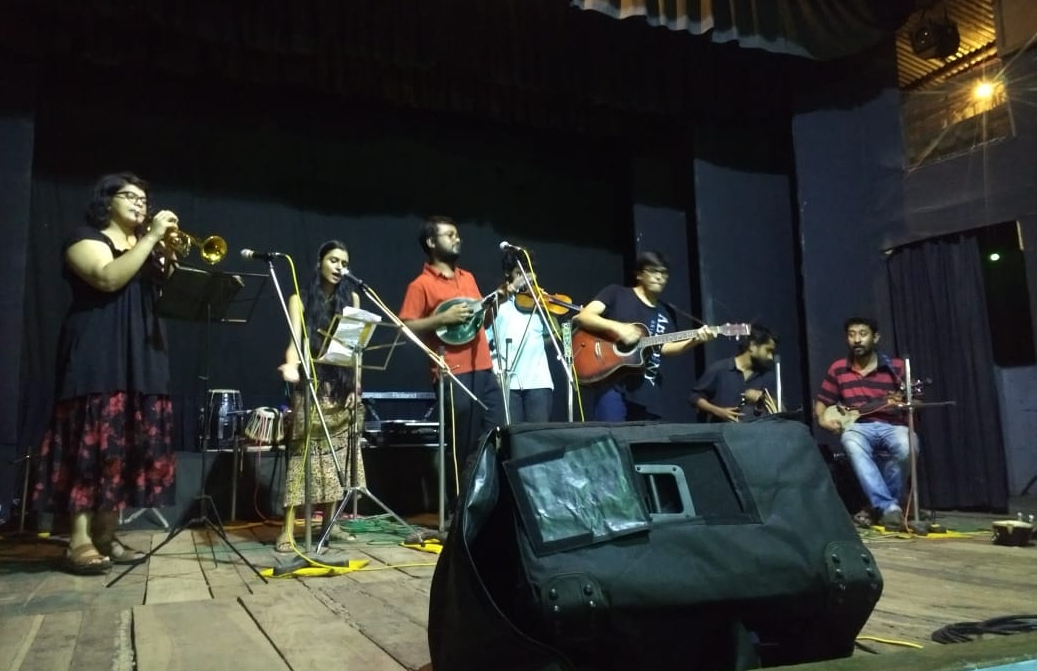 Individual contributions aside, different groups of people collected money and donated to this flood relief fund. Students, youths, cultural activists from Kolkata, Sonarpur and other suburbs went out on the streets collecting donations from common people in the run up to the event. Domestic workers from Basanti Colony, Bidhan Nagar also made collections from their locality and contributed to the relief fund. The organisers announced that a total of 1 lakh 20 thousand rupees was collected, out of which about Rs.20,000 was spent in incurring the total expenses of the concert. A team of activists from this collective would be going to Kerala with relief materials. 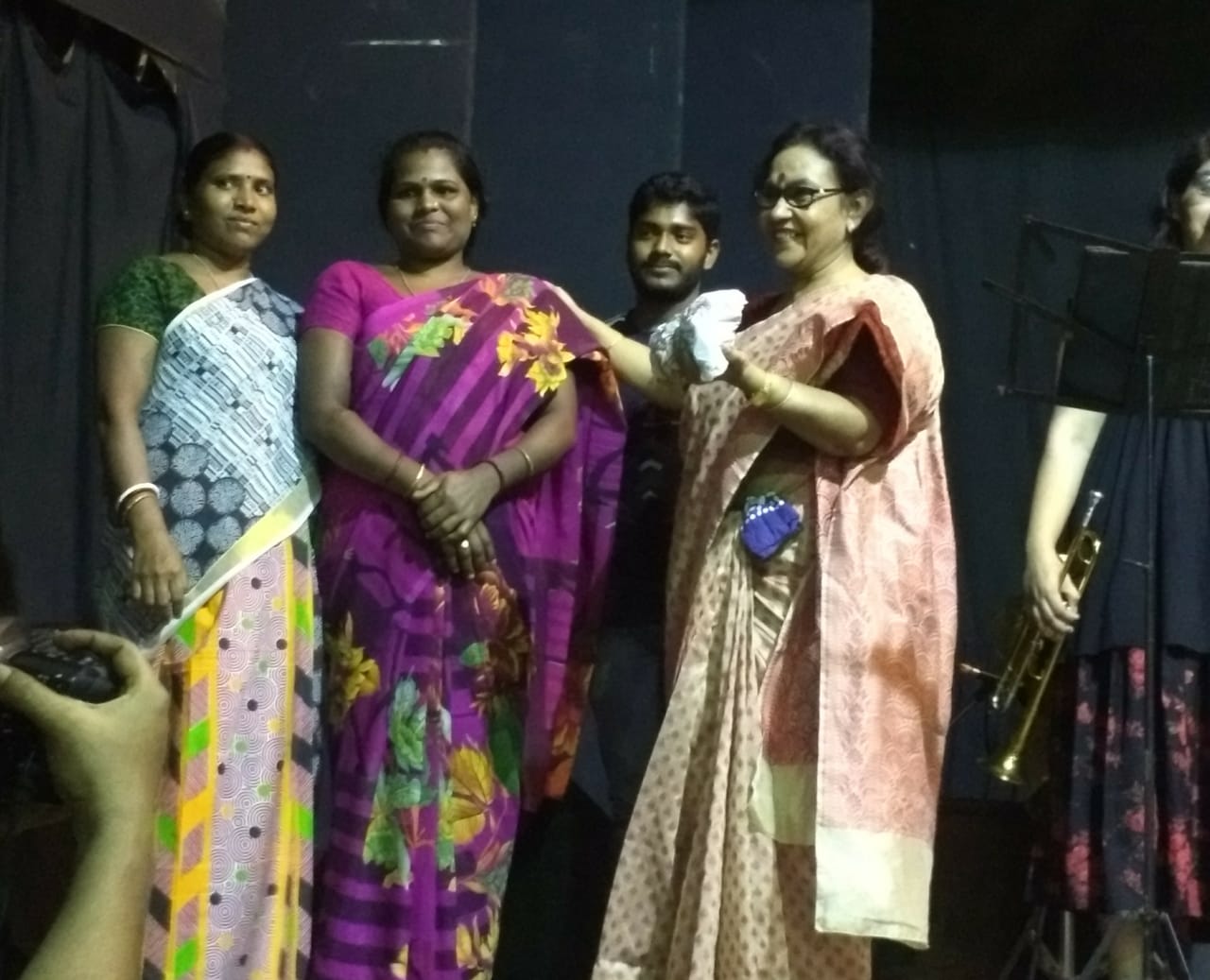 Representatives of Basanti Colony on stage

The concert lasted for almost three hours. Inquilab Band inaugurated the evening, with songs by radically progressive poets Habib Jalib, Faiz Ahmed Faiz and several others including a song created by themselves in the memory of the recent martyr Mafizul Khan in Bhangar. This was followed by a song composed by Sheetal Sathe of Kabir Kala Manch, jointly performed by Inquilab and Laal-on Band, following which the latter took the stage and performed songs by Kabir Kala Manch, Pratul Mukhopadhyay, Bidyut Bhowmick, and Suva Maity (former member of the band). Finally, Satyaki took the stage, and to the surprise of the audience, singer Moushumi Bhowmik joined him for one song. Moushumi Bhowmik with Satyaki and other musicians

In the midst of organising the concert, news about the arrest of several human rights activists all over India came in. The organisers put up posters condemning the arrest and unlawful detention.. An appeal was made to the viewers to attend a protest rally against those illegal arrests called by Association for Protection of Democratic Rights (APDR) the next day. 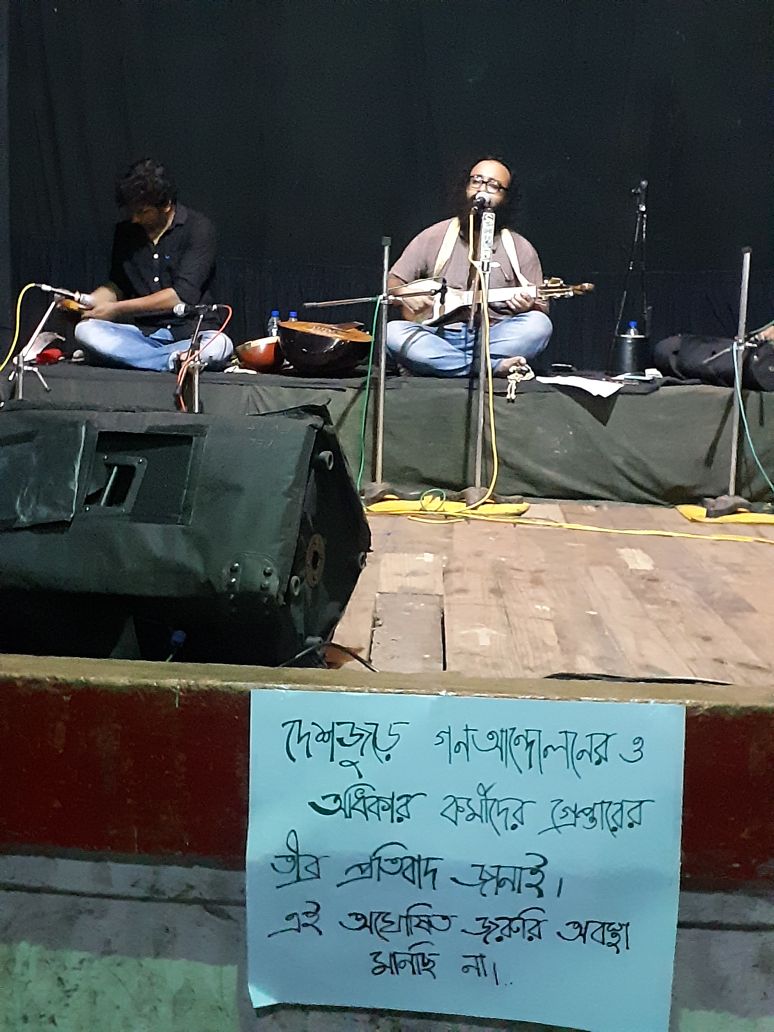 Satyaki singing; a poster against the arrests in front

It was an evening filled with music, organised at a very short notice, in solidarity with the flood victims in the state of Kerala, which is slowly and painstakingly attempting to return to normalcy. A lot remains to be attended now in this context at the level of policy-making, understanding the roles of the governments, and the general anti-environment path that we are trotting upon.