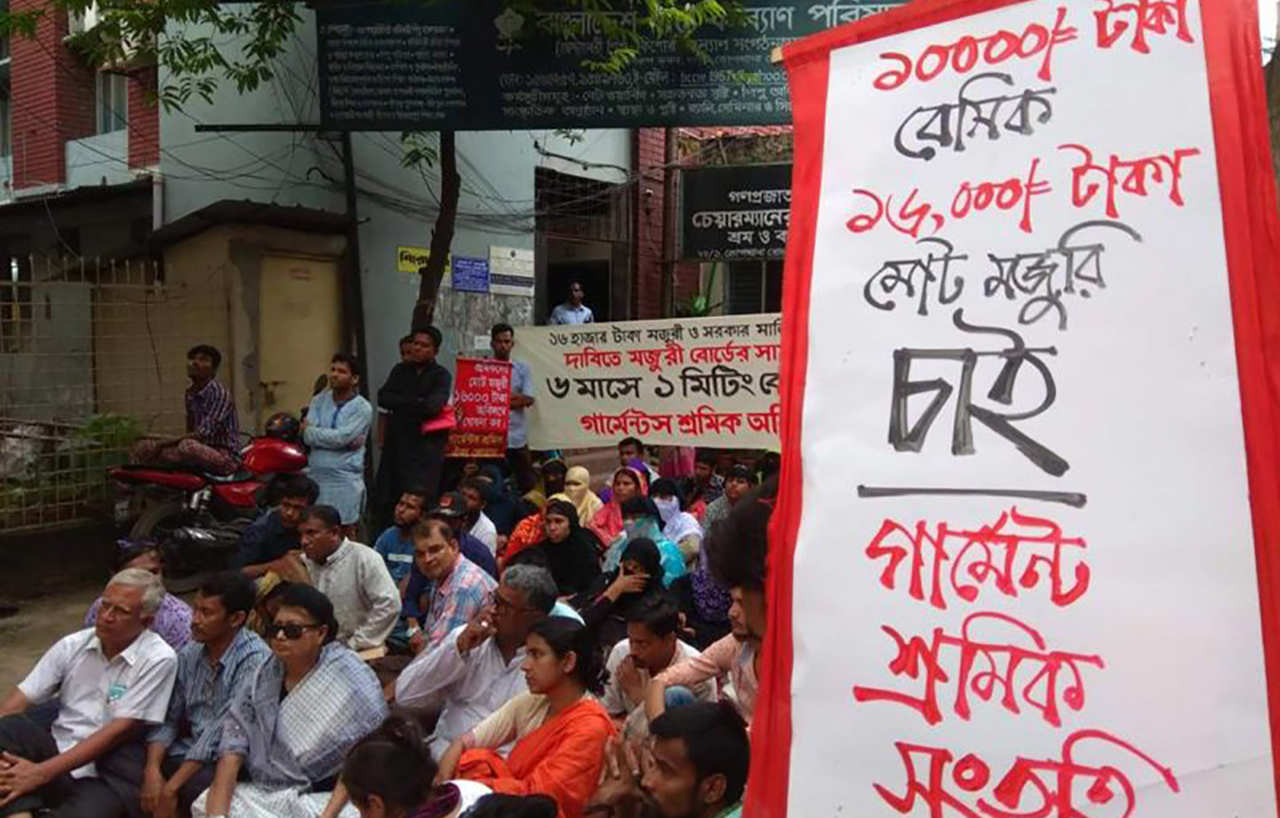 Over the last decade or so, millions of garment workers in Bangladesh have repeatedly taken to the streets with demands ranging from higher minimum wages and safe working conditions to the right to organise and collective bargaining. The current phase of the workers’ struggle has been around the demand for a rise in minimum wages. Based on existing reports and recent personal interactions with garment workers and labour organisers, Mitaja looks at the history of expansion of the garments industry in Bangladesh, the state of unions and organisations, and the role of the government in this matter.

The quote in the title, “শিল্প বাঁচলে শ্রমিক বাঁচবে” (“Workers will thrive as long as the industry thrives”) illustrates how the government and the Bangladesh Garments Manufacturers and Exporters Association (henceforth BGMEA) coax the garment workers to live in the misery manufactured by the competitive garment industry in Bangladesh. Bangladesh is the second largest exporter of ready-made garments in the world, with more than 4 million women working tirelessly for more than 12 hours a day producing branded clothes for the international market. Most of these women have migrated from their villages due to lack of options, to the capital city of Dhaka in search of a livelihood. Many documentaries and research studies record the deplorable working conditions, excessive threats, intimidation, and harassment that characterise these garment factories.

The Bangladeshi garment industry contributes more than 19% of export earnings for the country, estimated roughly at 28.09 million USD (according to the 2015-16 fiscal year report, Ministry of Finance), increasing the export growth by almost 10%.

Growth and expansion of the ready-made manufacturing garment industry saw a boom since the late 1970s, owing to the liberalisation of trade relations. The Multi Fibre Agreement of 1974 signed for the industrialising third world countries to access global markets came with a price – that of opening up their domestic cheap labour markets. This was a historic opportunity for the first world countries to explore cheaper labour markets in the third world countries to avoid ceiling limits on exports and imports and continue reaping increased profits. Soon the number of factories rose from 300 in 1980 to more than 4000 in 2010 with units opening up in the available plots. It was quite normal to have small congested spaces with no emergency exits, no breaks, threat on forming associations and unions and severe threat and harassment. The business owning elite was not bothered about labour rights while the state was preoccupied with bringing in more foreign capital.

In 2006, workers in FS Sweater Factory in Gazipur struck work demanding the release of three of their co-workers who were arrested three days prior, for participating in protests demanding an increase in wage. These agitating workers were locked inside the factory but they found a way out and blocked the highway nearby. Two days later, workers in a factory in Savar struck work demanding the unpaid wages for the past three months. The owner ordered the security guards to assault the workers. As the news spread, workers from around 4000 factories stopped work and took out rallies on the streets demanding a higher minimum wage and safety in the workplace. Their demands were met with only death, injury and arrest of workers. The government perceived this as a major threat and banned unions in 2007. However, after facing criticism from international organisations and governments, the ban was lifted in 2008. The next set of strikes took place in 2010 demanding a hike in minimum wages from 1,662 takas to 5,000 takas. The BGMEA lobbied with the government and agreed to raise the minimum wage to only 3,000 takas following which workers from around 700 factories called for a strike leading to more arrests. 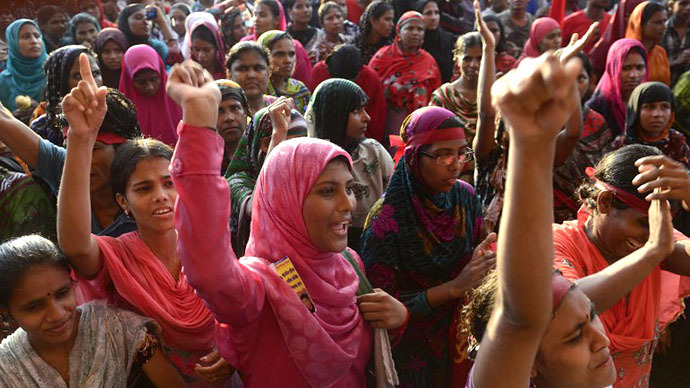 The next two years saw two of the worst industrial disasters in Bangladesh RMG industry – Tazreen Fashions where a fire broke out killing more than 100 workers and the Rana Plaza collapse where a nine storeyed building housing many factories collapsed killing more than 1,100 workers and injuring more than a thousand. Considered to be one of the most disastrous industrial accidents in history, the Rana Plaza collapse was followed by the entry of various international human rights and worker rights organisations into Bangladesh. These organisations conducted fact finding investigations of the incident covering the unsafe working conditions in the factories. As a consequence, international attention turned towards the brand buyers and the BGMEA which was held responsible for the unsafe working conditions in the factories. The inefficient management of the industry and the callous response to this industrial disaster led to the constitution of the Bangladesh Accord, a five-year independent legally binding agreement between apparel brands and retailers and trade unions designed to build a safe and healthy Bangladeshi Ready Made Garment (RMG) Industry. It was signed by more than 190 apparel corporations and 1,500 factories covering around 2 million workers in the RMG industry. The Accord however remains ineffective as it does not cover all the factories in the industry and lacks the resources to fulfill its functions of ensuring health and safety conditions in the factories. Towards the end of 2013 the minimum wage was raised to 5,300 takas after a successful strike by the garment workers. Another round of strikes and protests began in 2016, in the industrial belt in Ashulia, demanding a hike in minimum wage from 5,300 takas to 16,000 takas. The government responded saying that the labour law provides for a hike in minimum wage only after a duration of 5 years. 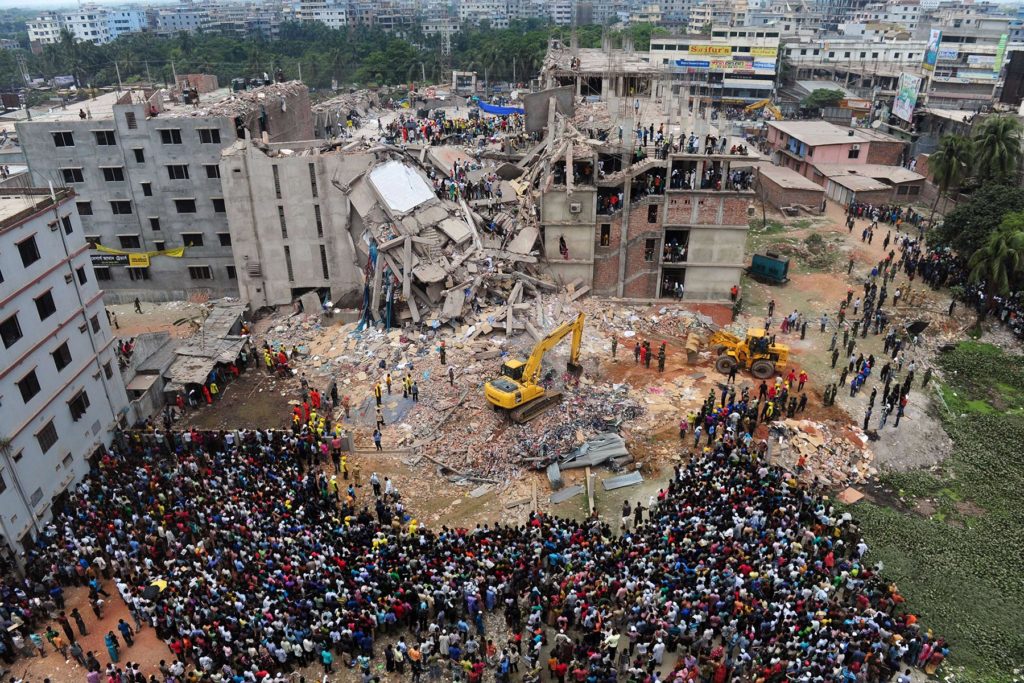 The current minimum wage does not allow for a decent living as the entire expense of a family on food, rent, medical and education fee and emergency expenditures are hardly covered. The workers’ quarters that came up with the garment factories as the inflow of migrants led the house owners to convert their houses into 6-7 one-room flats and put on rent after keeping one for themselves. These one-room flats cost anywhere between 2,500-4,000 takas depending upon the facilities of gas and water available. The expenses for food, without meat, comes to 5,000 takas for a family per month. Adding to this are the expenses for the medical fees and education of their children. This compels the garment workers to fall back on their families in the villages for money and food, or they pay money to shop-owners in installments, or loan money from the local samitis much before a month comes to an end. Further, with the news of a wage hike, the prices of commodities and house rent also go up. The demand for 16,000 takas, with basic as 10,000 takas, came up after a rigorous calculation of the expenses including food, education, medical, rent and emergency backup by the union federations in consultation with the workers.

Strict surveillance and the threat of job loss force the workers to hold back and agree to these conditions. The threat continues outside with the Industrial Police and local goons hired by the factories spying on garment workers in case they try to organise themselves.

In January this year, the government constituted a wage board for RMG sector after successive strikes by workers with representation from the owners, workers, a neutral observer and the official members of the wage board. The board was given a deadline of 6 months to come up with a conclusion on the minimum wage which ended on 14th July. Meanwhile, only three meetings have taken place without the board reaching any conclusion. Labour organisations all over the country had unanimously decided on the proposal of 16,000 takas as minimum wage. The workers’ representative, Shamshun Nahar Bhuiyan, women affairs secretary with the Jatiyo Sromik League, however pitched for 12,020 takas arguing that her membership with the party in the government binds her to follow certain protocols. On the other hand, the owners’ representative BGMEA pitched for 6,360 takas citing the strict competition in the export sector. 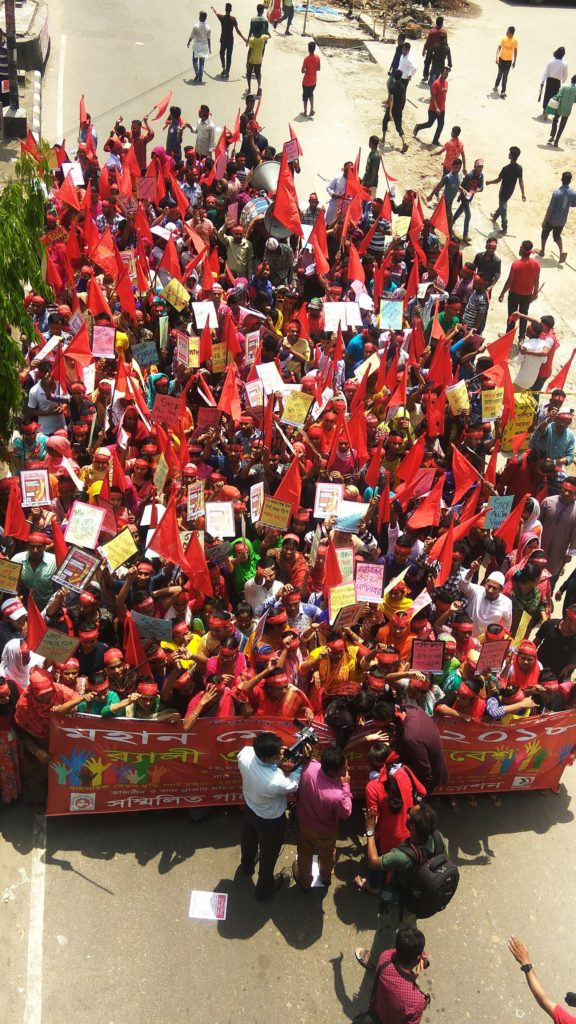 One of the rallies taken out by the garment workers on May 1st this year. Dhaka.

A platform of 12 labour organisations, Garments Sromik Adhikar Andolan, rejects both the proposals while pointing to the collusion between the government and the BGMEA in safeguarding each other’s interests. This collusion comes across even more clearly if we look at the ownership of the factories in the sector, with around 65 members of the Parliament own more than one factory. “They can try and change laws if they want, but then nothing happens”, says an organiser with a working women’s organisation. The labour union federations also believe that a change can be brought only when the owners realise the value and need for labour to retain and bolster the garment industry. Many labour leaders and researchers also note that a reform and strict implementation of labour law and regulations would also contribute to the cause of implementing labour rights.

Though the agitation after the Rana Plaza Collapse has alarmed a section of factory owners and led them to ensure basic minimum safety standards, many still find a way to bypass the laws. The rules of increment, bonus and overtime pay are also flouted citing low prices. According to the provisions in labour law, the government can allow a factory to not follow the overtime pay rules for a duration of six months in times of crucial assignments. This allows many owners to seek permission to run the factories beyond the legal work-time duration citing some assignment and shutting it down after producing surplus garments leading to job loss for the workers. On the other hand, the factory managements have de-legitimised the idea of unions by labeling them as a nuisance and introduced the Participation Committees (referred to as ‘PC Committee’) with representation from the management and the workers to resolve problems within the factory. The representatives of the workers are selected by the owners and not elected by the workers. Strict surveillance and the threat of job loss force the workers to hold back and agree to these conditions.

The threat continues outside with the Industrial Police and local goons hired by the factories spying on garment workers in case they try to organise themselves. The labour federations working in the garments sector unanimously agree that there is still a lack in the implementation of trade union rights that was promised by the government in the aftermath of Rana Plaza collapse. While the current protests revolve around the announcement of the minimum wage and the proposals by the BGMEA, the garment workers struggle has been fighting for decent work and living conditions and demanding freedom of association and collective bargaining as guaranteed by the labour law.

The author is a research scholar at University of Hyderabad, studying the garment industry in Bangladesh. Photos, unless otherwise mentioned, are from the author.