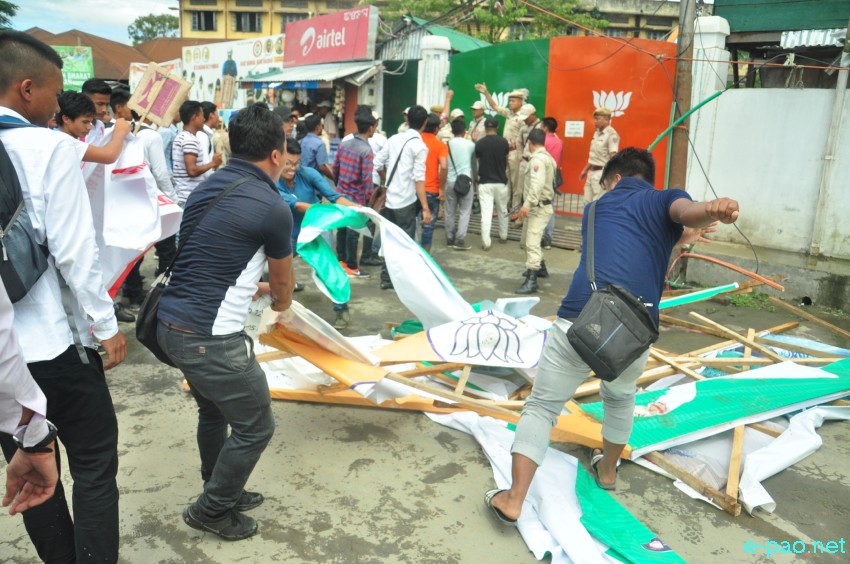 “… good examples [of virtue] arise from good education, good education from good laws, and good laws from those tumults that many inconsiderately damn.” – Niccolo Machiavelli, Discourses on Livy

The struggle in Manipur University has been continuing for more than fifty days now. Manipur University Students’ Union (MUSU) has demanded the removal of VC Aadya Prasad Pandey. He is accused of not performing the duties assigned to his office properly, of financial irregularities, irregularities in appointment, and saffronisation of the University. Michael Samjetsabam writes about the struggle in Manipur and lessons that students’ struggles in mainland India can learn from it. The main attempt here is to understand in particular, the contradiction between the University students and Hindutva fascist designs. As discussions regarding the VC’s political affiliation pick up in Manipur, here is a look at the allegation that the VC is attempting to saffronize the University.

Student movements in Manipur, in general, are combative in nature. These struggles do not please those who want to live their lives uninterrupted. The ongoing student movement in Manipur University embodies the underlying idea that strikes must create turmoil. The university is under complete shutdown, since May 31. It is not a shutdown of mere rhetoric, limited only to posters and pamphlets. It is an actual one. There are no classes, no research work, no administrative work, no exams, no admissions – everything has stopped. The strike in Manipur University has impacted more than eighty academic institutes affiliated to it. Manipur University Teachers’ Association (MUTA) and Manipur University Staff Association (MUSA) have extended support to the struggling students. Teachers have resigned from their administrative positions. Both the teachers and staff association are on relay hunger strike since 9th July demanding the removal of the VC. 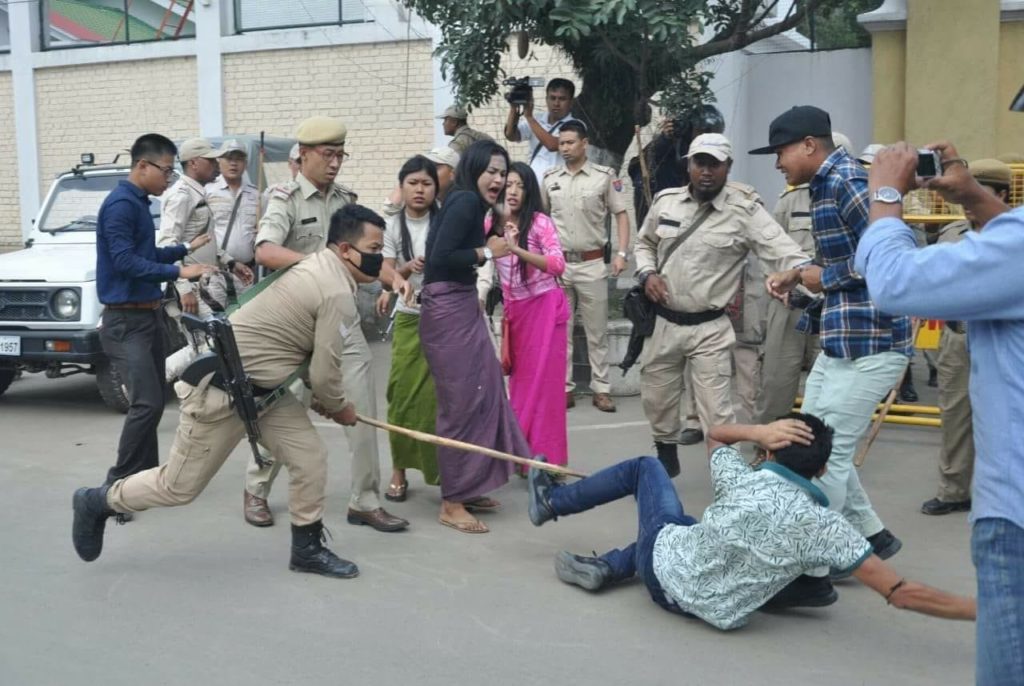 When there is turmoil in universities, people must take sides. In places such as Manipur, the underlying assumption is that universities are for the people. Therefore, people have taken sides. The Chief Minister of Manipur met representatives of MUSU, MUTA and MUSA multiple times due to mounting pressure. He suggested the possibility of the VC taking a leave and setting up of an inquiry committee to look into the allegations against the VC. MUSU, MUTA and MUSA stood their ground, maintaining that the only solution to the crisis is removal of the VC. BJP’s favourite narrative in such situations has been that protesting students are anti-nationals. The Assistant Director of Sports’ office was burnt on 8th July. Using this as a pretext, MHRD reportedly instructed the state government to close down hostels and bring security forces into the university to deal with so-called ‘anti-national elements’. 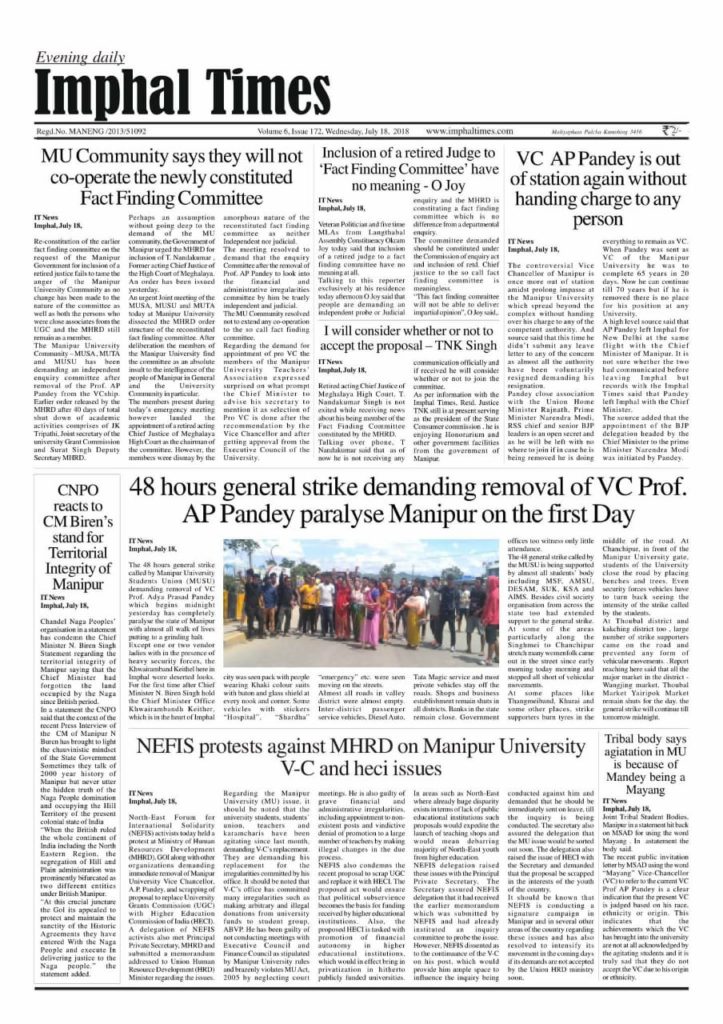 CM Nongthombam Biren Singh told the media that the Revolutionary People’s Front (RPF) demanded 5 crore Rupees from VC Pandey and that the office of the Assistant Director was burnt in relation to this matter. The attempt was to create the impression that MUSU is striking at the behest of insurgents. The narrative fizzled out because no relationship could be established between these events and the ongoing student struggle. MUSU alleges VC’s supporters burnt the ADS’s office as a part of their larger plan to brutally crack down on the movement, by bringing armed forces into the campus. When sticks did not work, carrots were thrown – MHRD announced a fact finding committee to look into the matter on the 40th day of the strike. It consists of JK Tripathi, Joint Secretary of UGC and Surat Singh, Deputy Secretary MHRD. It was later expanded to include Former Chief Justice of Meghalaya, T Nandakumar.  The committee consists of VC’s friends and a retired judge without any power, according to the students. The university community announced that it will not cooperate with the fact finding committee, rejecting the effort to dilute the movement. When negotiations failed, students started protesting in various places in the Imphal Valley. The movement intensified further when police launched an all-out brutal attack on students protesting simultaneously at the gate of Kangla Fort, Chief Minister’s bungalow, gate of Raj Bhavan and BJP Manipur Pradesh’s main office at Imphal on 16th July. Sital Oinam, General Secretary of Democratic Students’ Alliance of Manipur sustained serious injuries on his left arm, after he fell under a moving truck when police personnel pushed him in front of BJP’s office.

Manipur Police has brutally attacked students many times in the past. In July 2015, they killed Robinhood Sapam in a student protest demanding Inner Line Permit System. The killing provoked massive protests against the government at that time. This time as well, the attack on students protesting for the removal of the VC on 16th July turned things upside down for the ruling government in Manipur. The strike has now spread even to schools and other educational institutions. In order to intensify the struggle and respond to the police brutality, All Manipur Students’ Union, Students’ Union of Kangleipak, Apunba Ireipak Maheiroi Singpang Lup, Democratic Students’ Alliance of Manipur, Manipur Students’ Federation, Kangleipak Students’ Association along with Manipur University Students’ Union called an all Manipur bandh which lasted for 48 hours, from the midnight of 17th to 19th July. They demanded, in addition to the removal of the VC, action against police personnel involved in attacking the students. The bandh received massive support from the people, women’s organisations and different civil society bodies. It culminated with torch rallies in various parts of the Imphal Valley. People came out in large numbers to take part in the rallies. Police again brutally attacked the protesters, injuring many. 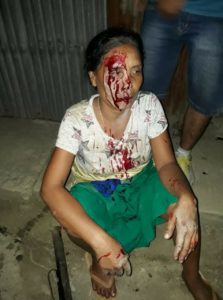 The government has suspended two policemen responsible for the attack on students. However, there is no news on the demand for the removal of the VC. Furthermore, the BJP government has stopped mobile internet services in Manipur in order to hide its ongoing brutal crackdown from the world. For the struggling masses, the logic is clear. The responsibility for this situation, and rightly so, is attributed to VC Pandey, the BJP Chief Minister and the controls that exist in mainland India. From various quarters allegations have surfaced that VC Pandey is advancing the hindutva agenda of RSS. And because of his connections with the RSS and BJP, he is still not removed from his duties. The question, why the VC has not been removed even after such massive protests against him, finds an answer in his political affiliations, at least in public discussions.

The VC’s political affiliations are becoming a matter of public discussion. It is important in this context to understand who the Vice Chancellor of Manipur University is. Aadya Prashad Pandey and his wife Veena Pandey, who is incidentally the current National Vice President of BJP Mahila Morcha, both hail from Varanasi (UP) – Narendra Modi’s constituency for the 2014 Lok Sabha elections. Pandey, before being appointed the VC of Manipur University, was teaching at Banaras Hindu University, one of the bastions of right wing politics in mainland India. He joined Manipur University in 2016, after his predecessor resigned following a series of protests in the university. Y security cover protects him. He came to maintain order in the university and do much more. VC Pandey, addressing students in Bharatiya Chhatra Sansad in the early days of 2018, proudly announced that he had successfully brought order to Manipur University, which was earlier moving towards ‘anarchy’. However, there is more to Manipur University. It is one of the most militarised universities in the country. It has an army camp on campus. The camp stands at the top of a hillock in the university. From the towers of the camp, the crusaders of Akhandh Bharat keep a watchful eye on the resistance brewing below it. 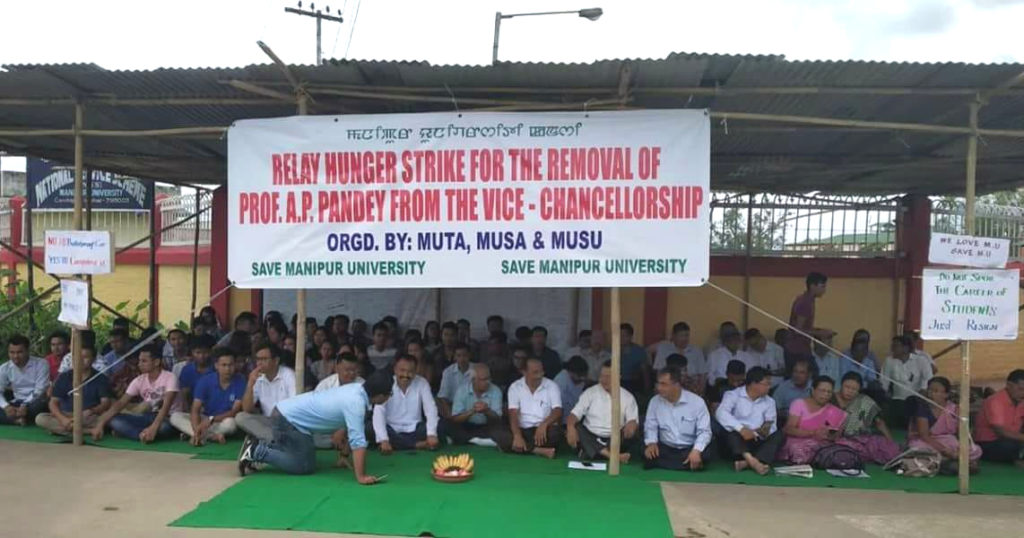 The allegations against VC Pandey make up a long list. First, he is accused of financial irregularities. MUSU has accused the VC of giving 5 crore rupees to a Lucknow based firm related to him, to buy answer sheets at the cost of 24 Rupees per sheet, without following due process. The sheets were earlier supplied by a local firm at the rate of 5 Rupees per sheet. Apart from corruption, he is also accused of completely disregarding the rules and regulations of the university while dealing with financial matters. He is accused of giving huge sums of University money to Akhil Bharatiya Vidyarthi Parishad (ABVP), RSS’s student wing. He is accused of filling positions in the university on contract basis in exchange for huge amounts of money from the applicants. These appointment were made without due process, without any public notification. MUSU accused him of organising late night parties with contractors, businessmen and BJP members in the university. Students allege that he has turned the university into BJP’s party office. MUSU argues that he remains absent from the university for long durations without any explanations. His visits are political in nature, promoting a particular kind of political agenda. He often goes to programs organised by RSS’s bodies. Akhil Bhartiya Vidhyarthi Parisad (ABVP) organised a program called Bharatiya Ashmita Ki Nirantarta in Delhi. VC Pandey shared the stage with many RSS activists in the program. RSS’ committee for manufacturing Hindutva history, Bhratiya Itihas Sankalan Samiti (BISS), organised a program in the History Department of Manipur University. The VC alongwith RSS organizers from other states attended the program. He doesn’t miss political events promoted by this government, be it Sardar Vallabhai Patel’s birthday or Bharatiya Chhatra Sansad in Delhi. It is hard not to make connections and hold plausible opinions about the VC’s politics. 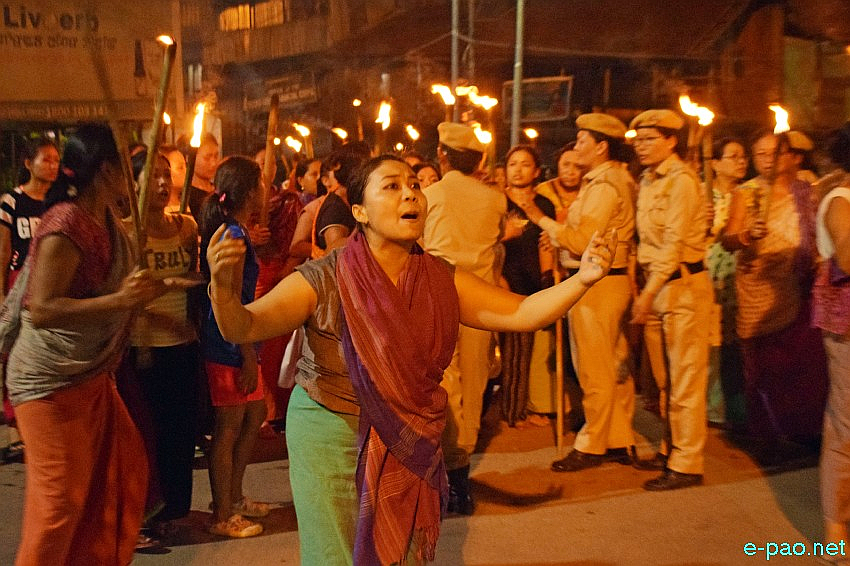 The Sangh’s usual method of turning popular opinion against the struggling students by calling them anti-nationals did not work in Manipur University, mainly because in this case they could not connect the relevant dots even by stretching imaginations. ABVP organised protests demanding normalisation of the university and in support of the VC, but couldn’t stop the struggle from reaching beyond the walls of the university to the masses. The massive support for the bandh and its successful completion with mass torch rallies demanding the removal of the VC indicate the strength of the students’ movement in Manipur. It shows us the fragility of the hold of hindutva politics in the state. RSS has thus decided that it does not want to get mixed up with this. It denies having any relationship with VC Pandey. It has even claimed that it has nothing to do with BJP Manipur Pradesh!

The struggle in Manipur University till now has got far less media attention than student movements in ‘elite campuses’ of mainland India. This is understandable given the example this struggle sets in front of contemporary student struggles across the country. This struggle will be remembered for two reasons. First, the manner in which it organically linked itself with the masses. It did not remain an isolated affair of the university. It convinced people in general to come out in solidarity with the struggle. And second, it will be remembered as a powerful example of how a students’ movement has been resisting the destruction of an educational institution at the hands of Hindutva forces. 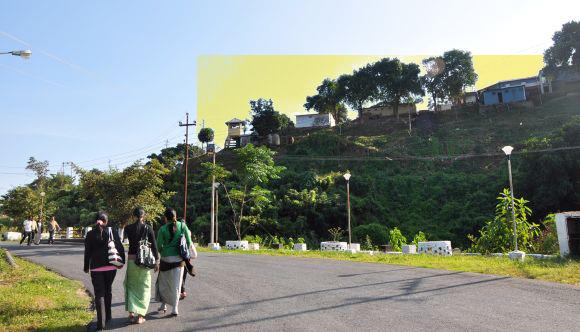 The author is a research scholar at IIT Bombay, and hails from Manipur.