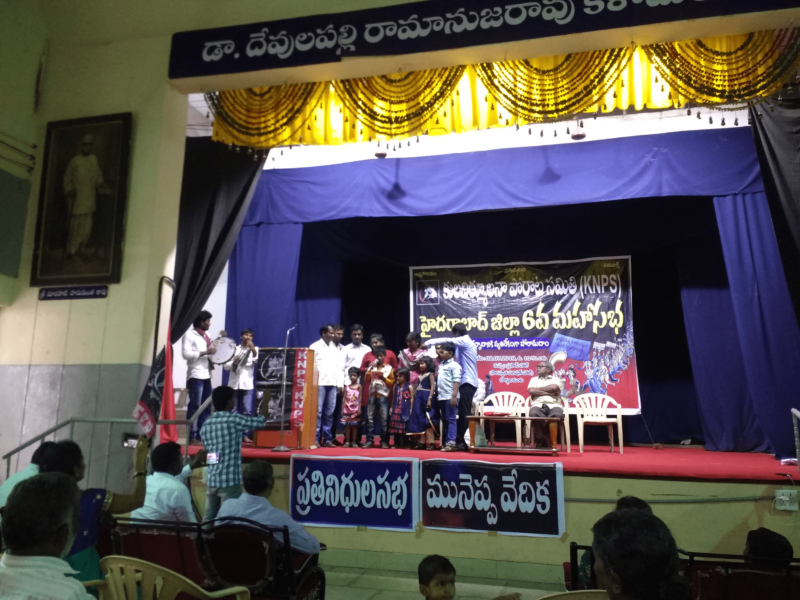 Struggle Committee for Annihilation of Caste meets in Hyderabad

Speaking at the 6th Hyderabad district committee meeting of the Kula Nirmulana Porata Samiti (Struggle Committee for Annihilation of Caste), Bandaru Laxmaiah, State President of KNPS, spoke of the wave of dalit organising in the wake of the Karamchedu massacre in 1985, led by the Dalit Mahasabha, and subsequent formation of KNPS in 1998. Addressing his comments to a context dominated by increasingly assertive Hindutva forces in the country, and marked by attacks against Dalits and Muslims, he laid out a reading of India’s twentieth century. Drawing upon Phule and Ambedkar amongst others, his presentation worked its way through an explication of KNPS’s agenda for the annihilation of caste. Why do all these Hindu gods and goddesses carry weapons all the time, he asked at one point – proceeding to denounce such violent iconography, and speaking of the destructive forces of cultural nationalism in India today. Speaking of the burning of Manusmriti on Manusmriti Dahan Divas (December 25) every year, he argued for the need to wage a cultural struggle against the idea of Hindutva.

Writing in 2005 about “Dalit and Naxalite Movements in Andhra Pradesh”, Ajay Gudavarthy described the early years of KNPS thus:

“In the KNPS’ manifesto, it raised the pertinent point regarding ‘classes – within caste groups’. While the autonomous dalit movement perceived the new classes as an empowerment of dalits, the KNPS argued that this nascent bourgeois class among the dalits was interested in the slogan ‘political power to dalits’ as it had already acquired economic power. … Thus – KNPS sought to link [the] dalit movement with the class struggle in struggles against feudalism and imperialism. It is because of this caste-class approach that KNPS could address various issues related to conflicts between the BCs and dalits and subcaste conflicts more boldly than the dalit movement, which had no means of negotiating them through the prism of identity politics [KNPS 1999]. The KNPS, for instance, also approached the issue of privatisation through its caste-class approach. While it demanded reservation in the private sector for dalits, it also mobilized them in struggles against privatization …. The KNPS with its broad caste-class approach seems to have been effective in mobilizing dalits and aligning them to revolutionary politics.”

Sunday’s meeting at the Telangana Sarswatha Parishat Hall was attended by a few hundred people. More creditably, unlike a lot of city based political meetings, the overwhelming majority of participants were from visibly economically disenfranchised communities. There was a sizeable presence of women and youth participants from religious minority communities. Such a gathering at a meeting led by dalit organisers to discuss annihilation of caste, gave the repeated calls for a strong collaboration between the different constituencies a very different charge. Delicious mutton biryani was served for lunch, and the vegetarian biryani option looked sadly forlorn with almost no one headed that way.

However, with the preceding panels running late, the open meeting started more than 3 hours beyond schedule, by which time most of the audience had cleared out. The diversity of the gathering was also undermined by predominantly male panels. Nor was this problem limited to only KNPS speakers or panels – of the 9 or so representatives from different organisations who spoke briefly in a series at one point, only one was represented by a woman, speaking for the Chaitanya Mahila Sangam, a leftist women’s struggle group. 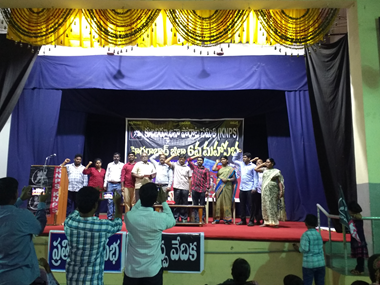 Satish Kumar, newly elected President of the Hyderabad district committee, chaired the open meeting that concluded the day’s activities. Maulana Naseeruddin from Wahadat-e-Islami Hind started off the panel by speaking of how Islam calls for equality, and expressed solidarity in the struggle for an egalitarian society. Radhika of Chaitanya Mahila Sangam followed up by discussing the threats to Dalits and Muslims, for instance with the violent forcing of dietary preferences – such as vegetarianism – on them. She placed the state repression faced by people such as Malini Subramaniam, Soni Sori and Bela Bhatia as part of a spectrum that includes sexualised violence, and went on to talk about Asifa and Kathua. Relating these events to Brahmanism and patriarchy, she spoke of the everyday stifling violence experienced by women: being relegated to domesticity and caring for one’s husband, and then tied down to home even after his death.

Venkatesh from Praja Kala Mandali followed her to the dias, and continued speaking as a police car veered into the complex premises. Professor K Laxminarayana from Hyderabad Central University spoke of the vision of Phule and Ambedkar, referred to the work of M.N.Roy, and expanded upon a critique of social stratification and Hinduism. The General Secretaries of the Hyderabad district committee and state committee brought the meeting to a close. Satish wrapped up the event by referring to the police harassment faced by KNPS even with simple things such as putting up the event banner at the door where the meeting was being held. The police car was still parked inside the complex as everyone gradually trickled out into the rain. 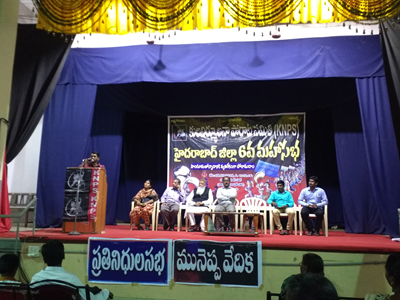 Satish Kumar as emcee starting off the open meeting that concluded the day’s event.