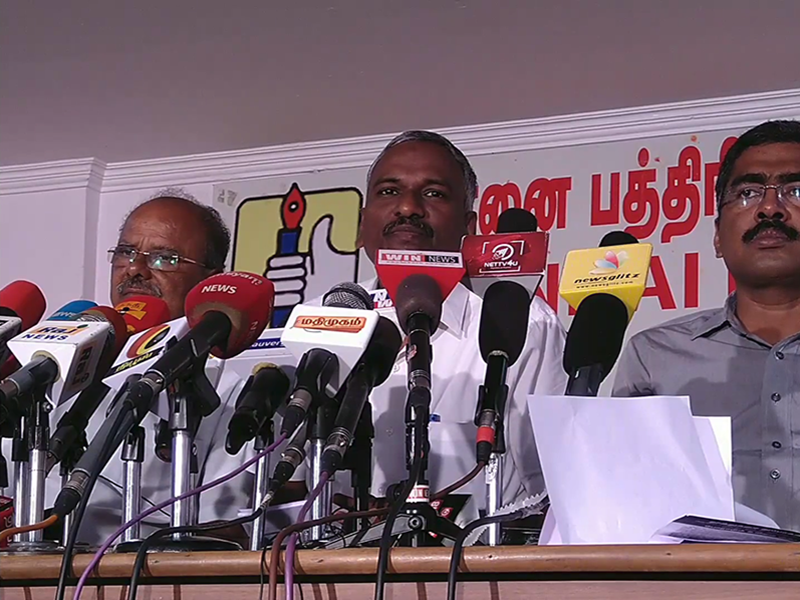 Persecution of Makkal Athikaram Intensifies, Efforts on to Reopen Sterlite

“Our politics threatens the police and the rulers, which is why they are attacking us” – C. Raju, state coordinator of Makkal Athikaram

The Thoothukudi police have continued to hound the people who participated in the anti-Sterlite protests, even as they stand accused of murdering unarmed protesters. In a transparent effort to deflect culpability they are stage-managing a dishonest public campaign, by using threats of arrests and exploiting the fears of terrorised communities, to pin the blame on Makkal Athikaram and two lawyers who provided legal advice to the anti-Sterlite Struggle Committee. Simultaneously, in the backdrop of these underhand machinations, efforts are on to reopen the closed copper smelter, Sterlite.

Makkal Athikaram leaders held a press conference in Chennai yesterday (July 3rd) to refute allegations levied against the organisation in recent suspicious petitions and denounce the campaign of insinuations and repression directed against them. On June 29th Robert Villavarayan, president of the Thoothukudi Country Boats Association and a group of people from the fishing community in Thoothukudi (Therespuram) submitted a petition to the District Legal Services Authority (DLSA) requesting protection from the constant police harassment. They also alleged that Advocates Vanchinathan and Hari Raghavan, as members of Makkal Athikaram, had brainwashed and instigated people to protest and participate in the May 22nd rally, which ended in bloodshed.

Earlier on June 21st the police had booked the two lawyers under multiple sections, arrested Vanchinathan and have been on the lookout for Hari Raghavan. They had provided legal advice and assistance to the anti-Sterlite struggle committee. Vanchinathan has been described as a civil and human rights defender by his fellow advocates and the Observatory for the Protection of Human Rights Defenders has condemned his arrest, calling for his unconditional release. In a Facebook post Cartoonist Bala shared his personal experience of witnessing Vanchinathan stand up to defend people’s rights on the ground without accepting any legal fees. Bala was arrested in 2017 based on a complaint by Sandeep Nandhuri, the present collector of Thoothukudi and then collector of Tirunelveli district, for a cartoon which mocked the chief minister, Tirunelveli’s police commissioner and Nandhuri himself. Within a few hours of the arrest, Vanchinathan, who was previously unacquainted with Bala, rushed to Tirunelveli and fought to get him released on bail.

Police have claimed to have a 9-page confession from advocate Vanchinathan, who is currently lodged in Palayamkottai prison. Makkal Athikaram alleges that in Vanchinathan’s so-called confession, about 70 people from various towns around Tamil Nadu have been arbitrarily included by the police’s intelligence wing as having indulged in destruction of property and violence in Thoothukudi. In fact Vanchinathan and Hari Raghavan are not affiliated to Makkal Athikaram, but to the lawyer’s collective “People’s Rights Protestection Centre”. A similar second petition was submitted on July 2nd by D. Ponpandian, a resident of Madathur village in Thoothukudi, which additionally requested that bail be denied to both lawyers in the interest of maintaining peace.

State co-ordinator of Makkal Athikaram, C. Raju, treasurer K. Kaliappan and Karpaka Vinayakam interacted with reporters on Tuesday. They asserted that these, which attempt to lay the blame for the May 22nd violence at Makkal Athikaram’s feet, were the result of police harassment and pointed out how both petitions contained the same text, albeit in different fonts, including a typo. Groundxero has accessed copies of both petitions and while they are not identical, there is significant overlap in both structure and content. He described how police have been foisting false cases against members of their organisation and using those to deny permission to hold even indoor meetings, which don’t need police consent to begin with. This repression, Raju argued, was not just an attack on Makkal Athikaram but also against other smaller parties and leaders, and aims to prevent people from exercising their democratic right to protest.

In recent weeks, the Tamil Nadu government has launched an unprecedented crackdown across the state, especially in Thoothukudi and along the proposed route for the Chennai-Salem 8-lane expressway. It has been indiscriminately arresting farmers, students, activists, environmentalists and politicians.

The Thoothukudi police has registered a total of 243 cases in connection with the events since May 22. On the pretext of conducting an investigation, it has been undertaking night raids and terrorising the locals in several villages and neighborhoods in Thoothukudi district. At the press meet, Makkal Athikaram discussed the legally untenable and absurd move of registering so many (First Information Reports) FIRs for what was effectively one occurrence. They used the examples of Makkal Athikaram members Sateesh and Murugesan, who have been remanded under at least 52 cases, to illustrate their point that police is employing the strategy of making (combined) bail unaffordable to keep people imprisoned. He also questioned how justice could be served when the Thoothukudi police – which itself stands accused of murder – conducts the investigations into the events! Though the Tamil Nadu Director General of Police, T.K. Rajendran had announced the transfer of cases against protestors to Crime Branch – Criminal Investigation Department (CB-CID), this proved to be an eyewash. Only 5 of the 243 cases are being investigated by the CB-CID and the inquires for the remaining 238 cases by the Thoothukudi police itself.

Armed with this carte blanche power the Thoothukudi police has the discretion to pronounce that a particular community or group of people led the May 22nd rally and hence bears the ultimate responsibility for the violence. The petitioners mention that they have learnt Vanchinathan and Hari Raghavan argued in court (in their bail applications) that the May 22 rally was led by fisherfolk and say that this has struck them with fear. In response, C. Raju denied that the PRPC advocates ever made these arguments in court. He requested the media to not use terms such as “brainwashing” or “instigating”. “Because the people who protest are not idiots. They are smart, sensitive, experienced and have shut down Sterlite with their sacrifices”, he said. From these petitions of contested veracity, is clear how the police are using their investigative authority to spread panic among the public and break alliances by disseminating false information.

Many media organisations have been wrongly reporting that Vanchinathan and Hari Raghavan are members of MA. C. Raju said that dragging in Makkal Athikaram was a deliberate tactic by the police, to construct a narrative justifying their actions to the public. They reiterated that the Thoothukudi police should stop its harassment and instead those responsible for the killings should be punished. K. Kaliappan has petitioned the Madras high court to constitute a Special Investigation Team (SIT) to probe the incidents in Thoothukudi and monitor the investigation.

Soon after news of the first petition broke, BJP’s Pon Radhakrishnan, the Minister of State in the Ministry of Finance and Ministry of Shipping, called Makkal Athikaram a terrorist organisation which needs to be destroyed. Raju told reporters that reopening Sterlite was the objective behind the public pronouncements of Pon Radhakrishnan and the religious gurus Ramdev and Jaggi Vasudev, who both recently batted for Sterlite. He contended that the government and police were using these petitions and baseless allegations against Makkal Athikaram as a diversionary tactic.

(1/2) Met @AnilAgarwal_Ved ji during my London visit. I salute his contribution in the national building process by creating lacs of jobs and economic prosperity pic.twitter.com/dcmMCcvTg0

Am not an expert on copper smelting but I know India has immense use for copper. If we don't produce our own, of course we will buy from China. Ecological violations can be addressed legally. Lynching large businesses is economic suicide.-Sg @Zakka_Jacob @CMOTamilNadu@PMOIndia

Raju also said “Let’s consider this. If on May 22nd, people had been allowed to smoothly and peacefully sit in front of the Collectorate saying ‘you’ll have to give us a final reply’ like at Jallikattu (protest at Marina beach, Chennai), what situation would the government have found itself in? What effect will that victory have on all the other protests all over Tamil Nadu? Who else besides Sterlite, the Tamil Nadu police and the Central government has an interest to make sure that this protest does not end peacefully but violently? Will any organisation which indulges in violence be able to gather people (for a protest) again, will the people come? No organisation which is responsible to the people, which has its principles and doctrines, will take it (violence) up.”

Makkal Athikaram has continued to reiterate that it did not lead the anti-Sterlite protests in Thoothukudi and ground reports confirm this. A grassroots movement grew out of anger against two decades of environmental injustice and more than 30 villages and neighbourhoods in and around Thoothukudi district united in their demand for the copper smelter’s closure. These petitions, made almost 40 days after the police killings by a tiny section of the public from only two localities, must be seen as transparent attempts by the government machinery to publicly besmirch not just Makkal Athikaram, but the movement itself and consequently absolving itself of any culpability.

Meanwhile Vedanta, which owns Sterlite, has appealed to the National Green Tribunal (NGT) to set aside the Tamil Nadu government’s May 28th order permanently closing Sterlite and other orders passed by the Tamil Nadu Pollution Control Board in April and May. It has also sought a permanent injunction to restrain the government of Tamil Nadu “from in any manner preventing or interfering with the functioning and operations of the Appellant’s (Vedanta) unit or in any manner purporting the prohibiting of the functioning and operations of the Appellant’s unit”.

The Tamil Nadu government and the chief minister repeatedly assured the public that Sterlite would never be allowed to operate again. But the government has used the police to conduct a crackdown on Thoothukudi, identified a convenient scapegoat in Makkal Athikaram, and is setting the stage for reopening Vedanta’s copper smelter.