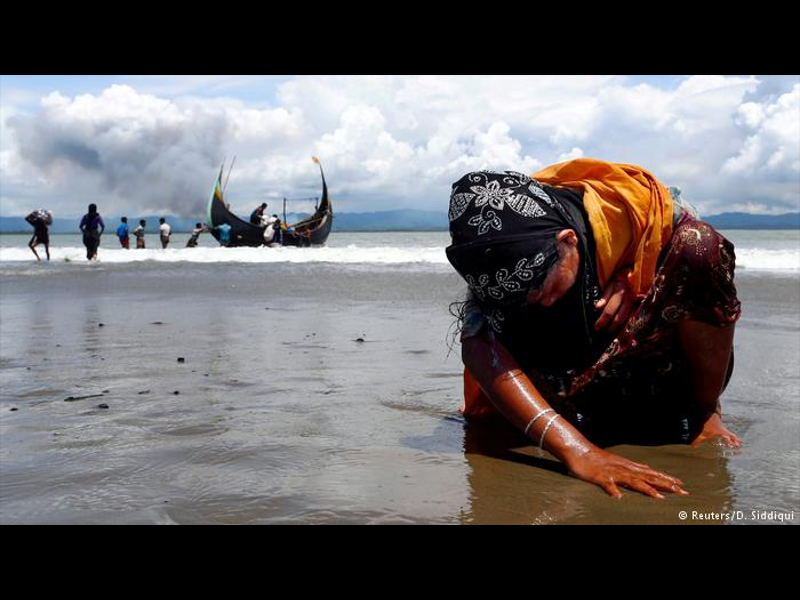 Warsan Shire, a 24 year old Kenyan-born Somali poet, writer and educator based in London, in her debut book, Teaching My Mother How to Give Birth (2011) observes, “No one leaves home unless home is the mouth of a shark.” Three years back, the photographs of Aylan Kurdi sent us shock-waves. The images of that three year old Syrian boy lying face down on a Turkish beach drew global attention towards the severe problems of refugees and migration.

It seems that the situation is worse now. A recent report by the United Nations High Commission on Refugees (UNHCR) has revealed worsened evidences and data about the current refugee crisis the world over. Indeed, the images of Syrian refugees desperately trying to get to Europe even under extreme perilous conditions; Trump’s recent decision forcibly cramming Latin American children into the cages of American imperialism; the Rohingyas piled up like garbage in cankerous makeshift camps in Kutupalong-Balukhali area of Cox’s Bazar, Bangladesh amidst rains and cyclones; boats with countless sub-Saharan Africans begging to reach the European shore and other images have been deeply etched in our memories. Yet, the above report is scarier than one can imagine. Displacement has reached epidemic proportions with one out of every 110 people in the world being displaced. 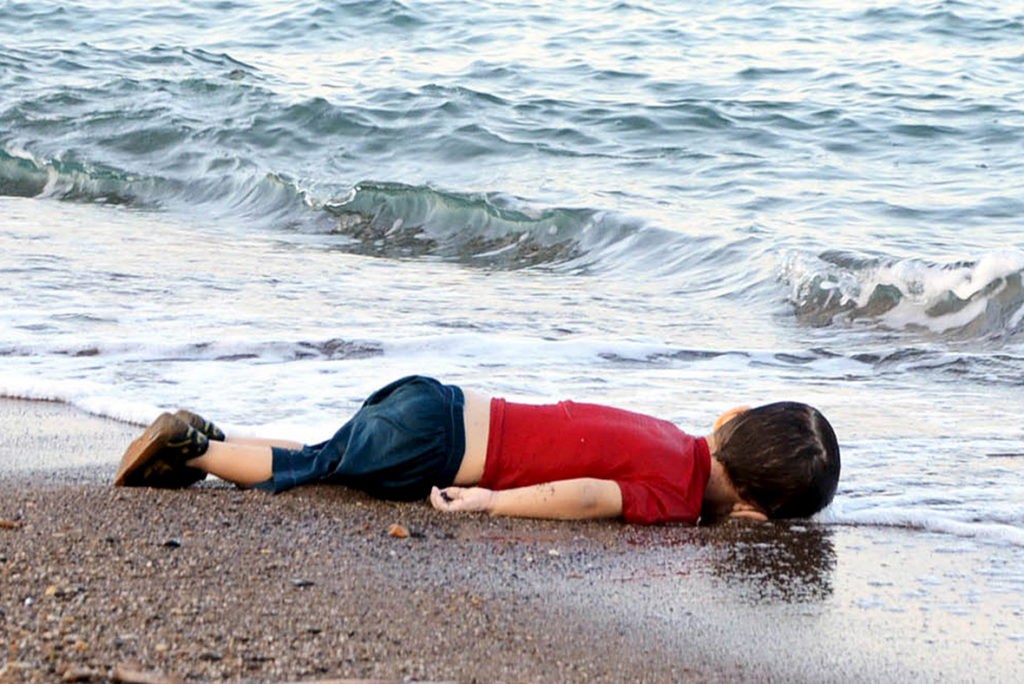 More than 71 billions and still counting

Released on 19 June 2018, a day before the World Refugee Day, the information in the report is so damning, much of it beyond imagination. It points out to a refugee crisis – exacerbated by the global capitalist crisis – that has reached historic proportions. These people were forced to run away to foreign lands or move to another part of the country that appears “safe” and “survivable”, temporarily. The report notes “As of the end of 2017, there were 71.4 million people of concern to UNHCR worldwide, more than half of whom were women and children. All had fled armed conflict, violence, insecurity, criminality, persecution, and human rights abuses. The vast majority of them (85 per cent) were in low and middle-income countries.” These forced displacements are a product of war & conflicts, ethnic cleansing, climate change and economic explosions across the globe. It is a refugee crisis that outnumbers the WWII and the postwar years, when 40 – 60 million persons around the globe were displaced. Every two seconds, a person is displaced in some corner of the planet or the other.

The Syrians continue to be the protagonists of this dramatic snapshot, with 6.3 million refugees and 6.2 million internally displaced persons. In 2017, 2.6 million Syrians added their name to the endless list of refugees coming from this devastated land. However, the rapid deterioration of the Rakhine situation or the latest spate of violence in the eastern parts of the Democratic Republic of the Congo forcing large numbers of Congolese to run away to adjoining Burundi, Tanzania and Uganda and the exploding violence resulting in human disaster in South Sudan have made these countries jump places in the refugee index. More than 66% of all refugees come from Syria, Afghanistan, South Sudan, Myanmar, and Somalia. 2.9 million persons were displaced in 2017 alone.

In his Military Programme of the Proletarian Revolution, Lenin comments that capitalist society is and has always been horror without end. The current refugee crisis aptly illustrates the levels and the depths of this horrific system. The refugee crisis has reached an additional dimension since 2001 with the invasion of Afghanistan by imperialist powers under the pretext of ‘war on terror’. It created 5 million refugees, half of whom have not been to able to go back to their land, many of them women. As a matter of fact, Afghans were the largest number of refugees before Syrians overtook it. NATO member states including the German-French-Belgian-Italian-Croatian-Hungarian-Czech participated in this destruction under the Anglo-American leadership.

Again, in 2003 the US-UK led invasion of Iraq forced 2 million Iraqis to flee the country and 1.7 million internally displaced refugees apart from hundreds of thousands of civilians dying. In 2011, the imperialist military intervention in Libya devastated the country creating up to 300,000 refugees. The offensive launched under the pretext of saving Libyans from the dictator Gaddafi was actually done in order to protect imperialist interests there. Another major humanitarian disaster was enacted.

Since 2011 Syria is a theater of an unforeseen tragedy. On one side, the Anglo-American duo and their cohorts like Bahrain, Qatar, Saudi Arabia and Turkey and the Russo-Iranian alliance on the other side have encouraged, backed and armed various warring factions weaving an eternal web of armed conflicts that have forced more than 12 million Syrians flee their homes. In this inter-imperialist conflict in the region, the lives of ordinary Syrians proved to be too cheap.

A situation is thus created where there are more refugees since World War II, and people are staying refugees for longer than ever before. Years, decades, sometimes entire generations. However, the instigator of this huge refugee crisis, imperialism, refuses to accept the consequences. 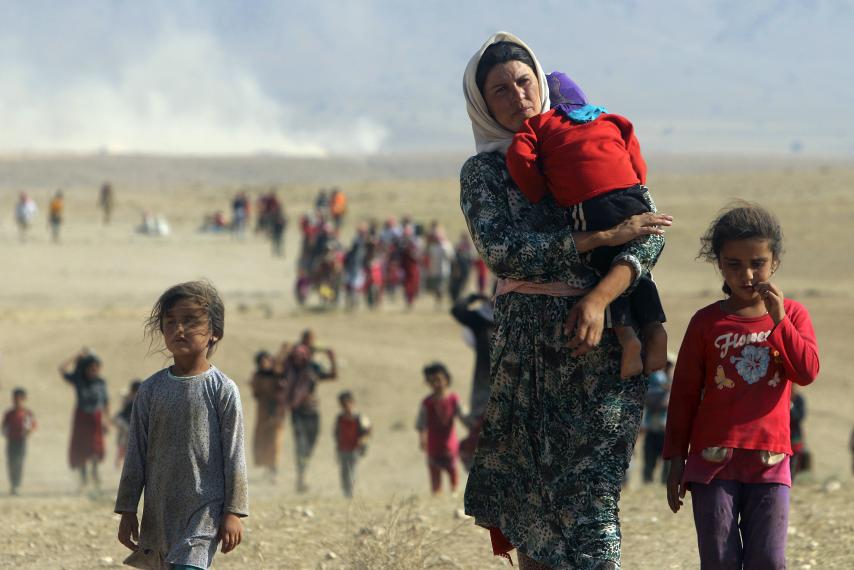 Displaced people from the minority Yazidi sect, fleeing violence from forces loyal to ISIS, walk toward the Syrian border near the border town of Elierbeh on August 11, 2014. Source: Newsweek

Donald Trump comes up with a smart solution in the midst of this grave crisis. He decides to close American doors for refugees. Earlier, a travel ban on Muslim travelers from Iran, Libya, Somalia, Sudan, Syria and Yemen to US reflected his attitude towards human plight caused by repeated US misadventures in that region. Instead of ameliorating the inadequate United States Refugee Admissions Program, the US administration suspended it and thereby placed a four-month blanket ban on refugees. The president himself continues with an unashamed offensive and intolerant rhetoric about refugees and immigrants. He declared that all unauthorized crossing of the US border will be prosecuted. This is leading to criminalization of asylum seekers and imposition of criminal sentences before any consideration of asylum claims. Moreover, asylum seekers are separated from their children creating major psychological and other detrimental consequences for the children and their families. This is done with the conscious policy of holding children as hostages to deter other would-be asylum seekers. The separation of families has appropriately been the subject of much public attention and concern, and it comes on top of a range of Trump administration measures that create unfair and unreasonable risks to asylum seekers and, in many cases, conflict with US legal obligations. 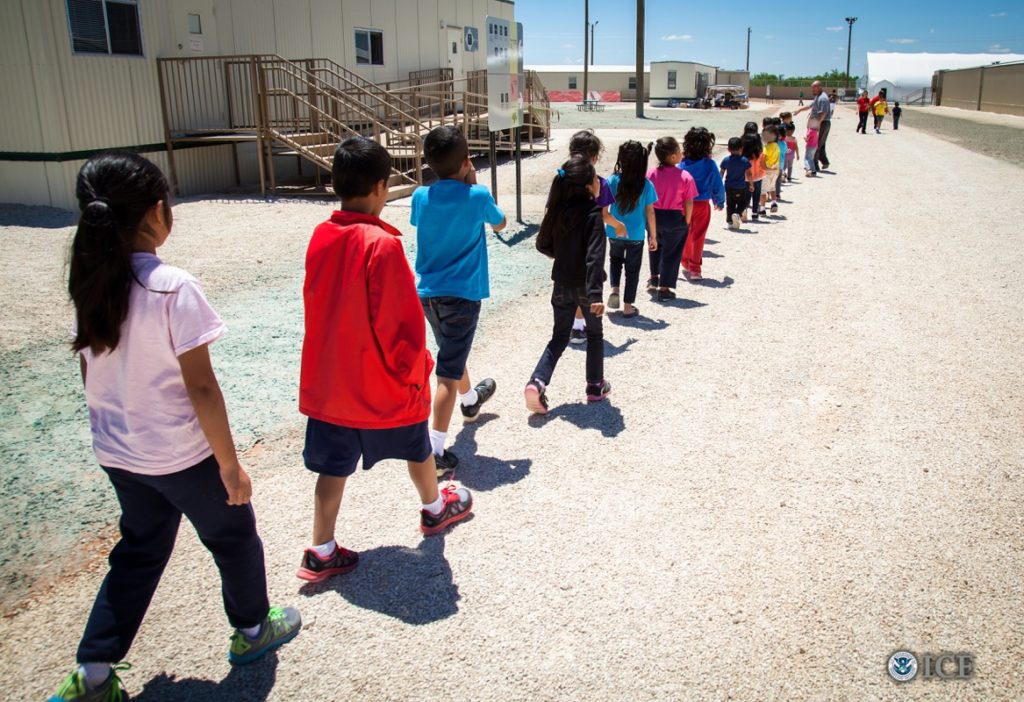 Latin American immigrant children being separated from parents and arrested by the US administration. Courtesy: feministing.com

Trump has regularly pronounced unrestrained hostility towards the US refugee policy even since his campaign days, vilifying refugees, especially from Muslim countries. However, the ground realities indicate that the purported dangers posed by refugees are vastly overstated. Around a million refugees have resettled in US since 9/11. Thousands of violent incidents have taken place there resulting in death of Americans however, in not a single case has any refugee been found responsible for any violence.

The recent meeting at Brussels over the EU deal on migration ended in Europe shifting its obligation for offering help to people in trouble to others and keeping its borders closed.

The arrivals figures have now dropped in the old continent owing to governments cracking down on the refugees. Matteo Salvini, the Home Minister of the brand new right-wing government of Italy and leader of the xenophobic Northern League, was the subject of numerous headlines these days, both for his proposal to make a census of gypsies in order to expel all those who are not Italians, and for his refusal to receive the ship Aquarius. This vessel with more than 600 Africans on board was forced to float across the Mediterranean for days until landing in Spain. This undoubtedly highlighted once again the issue of desperate boats that point to Europe. For its part, in Hungary the right-wing has put into debate bills that seek to penalize those who help refugees.

Overall, the refugee crisis in the old continent – created by European imperialism by promoting wars, massacres and dictatorships in Africa and West Africa – reinforces the disintegrating tendencies of the European Union. In spite of a drop of the number of arrivals in the last two years, the crisis has worsened. In the middle of the dispute over the distribution of the refugees, where the primary recipients (like Italy and Greece) are the most affected, France and Italy exchanged strong words. The minister, Matteo Salvini accused the French leader Emmanuel Macron of hypocrisy for his criticism of Italian immigration policy, reminding him that his country hinders the entry of migrants at the Ventimiglia crossing. On their part, the Visegrad group (Poland, Hungary, Czech Republic and Slovakia) reject any quota of migrants in their countries. The attempt to “socialize” the crisis through country quotas has horribly failed.

The political crisis is also reproduced within each country, as exposed in Germany by the clashes between Merkel and Home Minister Horst Seehofer, of the Christian Social Union (CSU). The latter demands that the chancellor tighten the screws against migrants. The CSU threatens her of pulling out support from her government if the borders are not closed.

An idea explored by European states is that of an opening up of new buffer states. Already Turkey after its agreement with the EU to stop migrants to Europe, hosts the largest number of refugees in the world, with 3.5 million people. The countries in which the EU states now want to confine the new migrants, cynically referred to as regional landing platforms, are Libya, Albania and Tunisia – are already ruined by social and political catastrophe.

India and China not left behind

Interestingly, China was a good beneficiary of the ongoing humanitarian crisis in the Rakhine state of Myanmar. While thousands of Rohingyas perished and hundreds of thousands fled for their lives, Beijing has skillfully exploited the turmoil to advance its own interests. Its an indisputable fact that the Myanmarese regime has been able to operate with such brutality and impunity due to the strong Chinese support it received in spite of global condemnation of their actions including the ruthless ethnic cleansing by the army. 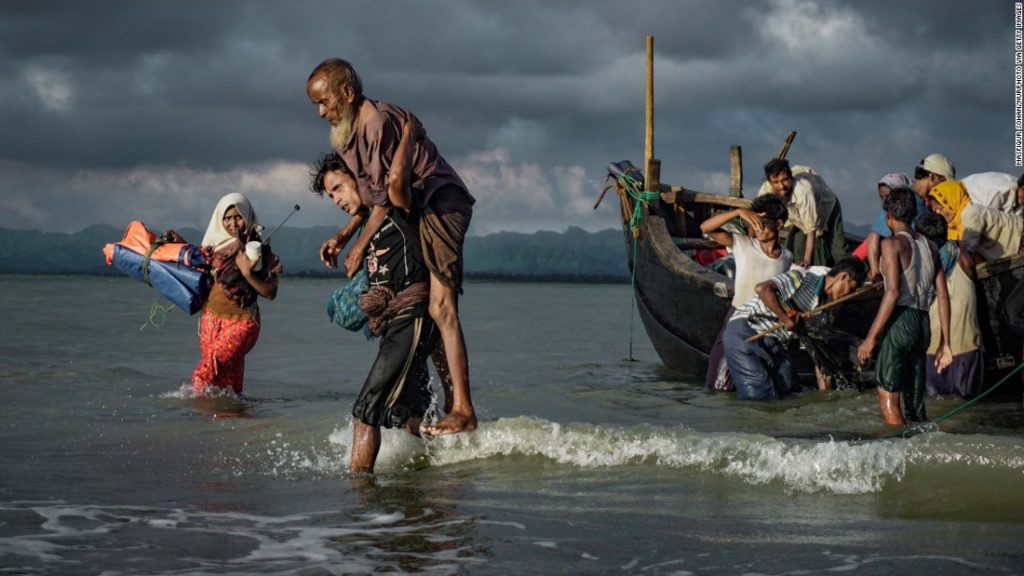 China’s nemesis in the South Asian region, India, is not left behind. The Indo-Chinese troops might be involved in recurrent stand-offs on the controversial Himalayan border and power over Myanmar, but the aspirant super power neighbours on the either side of the Himalayas are in agreement about the Rohingya crisis. Heavily invested in Rakhine state, both these powers are backing the illegal Myanmarese regime, an unprincipled and immoral act that needs unanimous condemnation.

The Indian government has gone to the extent of threatening to expel nearly 40,000 Rohingya migrants who it claims have illegally settled in the country. It has also submitted an affidavit to the Supreme Court accusing Rohingyas of being involved in all sorts of criminal acts.

Both India and China have economic interests in the Rakhine state. Myanmar is also pivotal to India’s Look-East policy and China’s One Belt One Road (OBOR) initiative. Both the countries are looking to extract natural resources in Myanmar that is up for grabs. It is also an emerging arena for capital investment.

The major imperialist powers from across the Atlantic along with their cohorts and the sub-imperialists across the globe have done everything in their capacity to create this humanitarian disasters at a global scale. From devising criminal plans against migrants to protecting capitalist interests of their respective countries – the catastrophe produced by war and economic advances has complicated the problem beyond any easy solution. And now they add spice to the curry by refusing to let in refugees.

The author is a Kolkata-based political analyst and activist