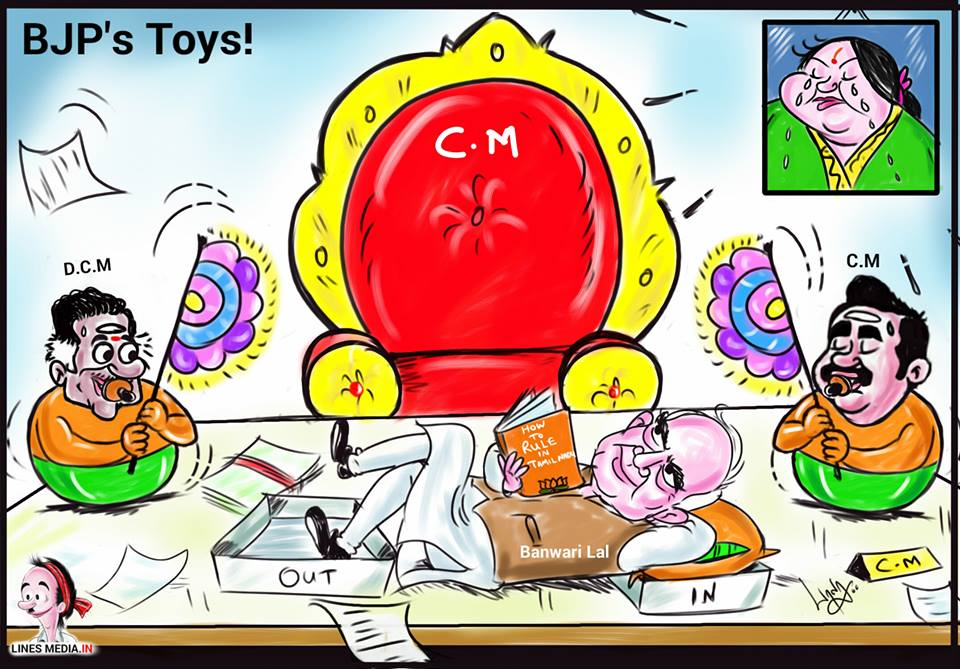 Tamil Nadu government under CM Edappadi Palanisami and Deputy CM O. Paneerselvam has never proved its majority on the Assembly floor. Following Jayalalitha’s death only seven months into her tenure, Tamil Nadu saw everything between standard horse trading moves to bizarre meditations at her memorial in a battle between various factions to head AIADMK and retain power. This year, O. Paneerselvam publicly admitted what was widely believed — that Prime Minister Modi played matchmaker for his merger with Edappadi Palanisami. The Bharatiya Janata Party is orchestrating a farce by using the office of the governor to run a parallel government and playing puppeteer with AIADMK’s power hungry leaders, who have capitulated to the central government on almost every issue, to worm its way into Tamil Nadu. Under the aegis of the BJP, the EPS-OPS government is directing an assault on farmers, student activists, environmentalists, political organisations, media, state autonomy and the defiant public at large. Lois Sofia writes. You can read part 1 and part 2 of this series here and here respectively.

Tamil Nadu governor Banwarilal Purohit’s tenure, which began in October 2017, has been marred by repeated controversies and calls for his resignation. Opposition parties in Tamil Nadu have been up in arms against his tours around the state since at least November 2017 – when he visited Coimbatore and conducted meetings with officials. DMK’s working president and opposition leader M.K. Stalin, CPIM, Congress, VCK (Dalit Panthers Party) and TTV Dinakaran who leads a breakaway section of AIADMK MLAs have all criticised the governor for interfering in the administration of the state. Leaders of opposition political parties have been openly accusing the Modi government of using the office of the governor to rule the state after bypassing the elected government. But BJP’s leaders have been not only been cheering on the governor’s actions but also pushing for criminal action against any display of protest against the governor. The governor had been met with black flags during many of his visits in the past eight months, and on June 23rd police arrested at least 300 DMK cadres in Kadalur for conducting a protest. Stalin condemned the arrests and demanded the governor’s resignation. He also tried to lay siege to Raj Bhavan and was detained by the police along with 400 of his party cadres.

In response, the governor’s office released a statement openly threatening to arrest protestors by citing Section 124 of the IPC which allows for a sentence of upto 7 years for “assaults or wrongfully restrains, or attempts wrongfully to restrain, or overawes, by means of criminal force or the show of criminal force, or attempts so to overawe, such President or Governor”. DMK has announced that it will continue with its black flag protests against Banwarilal Purohit.

Purohit’s name was featured in the scandal where a university professor, Nirmala Devi, tried to persuade female students to offer sexual favours to higher officials. He ordered a probe into the issue and during a media interaction held to clarify the decision, patted a female journalist’s cheek instead of answering her question. After the journalist publicly objected and following public outrage, Purohit apologised while still justifying his action as ‘grandfatherly’.

Attack on Media, Artists and Activists

There have been troubling developments, fallacious police cases and planned attacks by right wing groups in places other than just Thoothukudi and Salem. Earlier in April, singer Kovan (MKIK) was arrested for singing a song he composed ridiculing the Rath Yatra at a protest organised by Makkal Athikaram in Tiruchirappalli. He was charged under sections 153-A and 506 and was released on conditional bail. The case was initiated after a complaint filed by BJP’s Tiruchy district youth wing president N. Gautam who accused Kovan of insulting the Prime minister, Tamil Nadu’s chief minister and the Hindu epic Ramayana.

Puthiya Thalaimurai TV hosted a panel discussion on the topic ‘Continuous protests— For rights or for political reasons?’ at a conference room in a Coimbatore private college on 8th June. While responding to Tamil Nadu BJP President Dr. Tamilisai Soundararajan, Director Ameer said “It has been said that violence (at a protest) is unacceptable, loss of life is unacceptable and the question of who set fire to the police vehicles (in Thoothukudi) has been raised. Let me ask a simple question. In this same city (Coimbatore), about two years ago when a Hindu Munnani functionary was murdered (C. Sasikumar) who damaged vehicles?” Various fringe Hindu outfits which had gathered at the venue objected to this remark, disrupted the taping of the show and wrecked the venue. They also attacked a vehicle belonging to another panel member MLA Thaniyarasu, believing Ameer to be inside it. The police registered cases against Ameer (hate speech, intent to incite one community against another), Thaniyarasu (for abetment) while completely overlooking the Hindu extremists and BJP cadre who planned and caused the ruckus. TheNewsMinute has quoted MLA Thaniyarasu as saying: “Later that day, eight people threw stones at my car and a case has been slapped against them as well. But I don’t understand why we have been booked for simply expressing our thoughts in a debate. This is definitely because of the BJP’s influence on the ruling government. We will take this up in the Assembly on Monday. This is a huge blow to our democracy.” Shockingly, they also booked the Puthiya Thalaimurai TV channel and its reporter, Suresh Kumar even though the segment was never aired. Journalist associations including Editors Guild of India, and various political parties including DMK, CPIM and TNCC (Tamil Nadu Congress Committee) condemned the police action, even as Chief minister Edappadi Palaniswami defended it in the legislative assembly.

Following the incident Puthiya Thalaimurai TV was arbitrarily moved from the 124th slot to the 499th slot by Arasu Cable TV, the cable television network owned and operated by the state government, which commands a dominant market share. While this had always been the case, recently Arasu Cable TV is being flagrantly used by the government to control and discipline TV channels more than ever before. When the police opened fire on protestors in Thoothukudi, the government blocked some TV channels including Puthiya Thalaimurai for simply broadcasting scenes from the protests.

Tamil nationalist leader P. Maniarasan, 71, of the Tamil Desiya Periyakkam and coordinator of Cauvery Rights Retrieval Committee was attacked by mysterious men on bikes in Thanjavur, who unseated him as he was riding pillion. He sustained injuries on his knees and hands and other parts of his body and was hospitalised. Although the attackers got away with his laptop, mobile phone, ATM and PAN cards, in the present political climate, it can only be seen as a deliberate and politically motivated assault.

Nilani, a Tamil actor who works for television, was arrested this week for a video where she is seen condemning the police shootings in Thoothukudi while dressed as a police officer for a shoot. The video was widely circulated on social media. She has been booked under IPC sections 419, 153, 500 and 66 D of the IT Act. 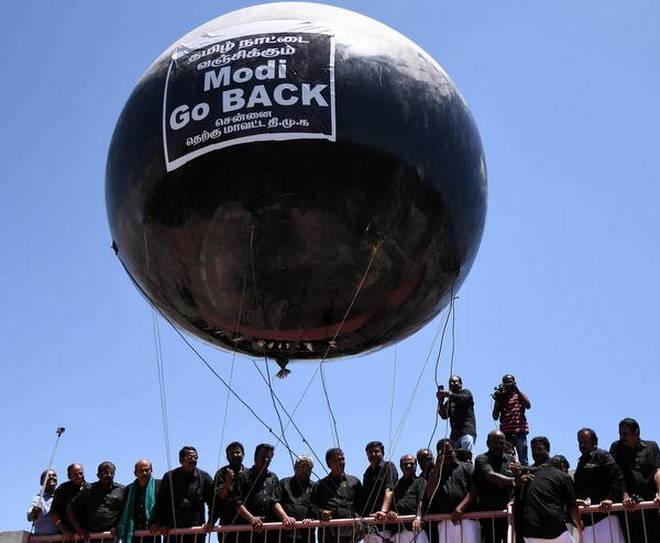 Black flags and balloons bearing the message “Go Back Modi” greeted the Prime minister when he visited Chennai this April. Photo courtesy: K.Pichumani

The present AIADMK government is widely perceived as a puppet regime controlled by the Modi government and has been duly following in the latter’s footsteps. By BJP’s own admission, Tamil Nadu is a “problematic state” for the political party where it has been trying struggling to gain a political foothold.

This last month has seen a escalating rhetoric from the BJP leaders in Tamil Nadu. Pon. Radhakrishnan, the union minister of state for shipping said this week “I am sure Maoists, Naxals and Muslim extremists as well as other extremist groups, operating in the name of Tamil (linguistic nationalism), have infiltrated into many sections of our society. The state government should act strongly against them. I have been raising this issue since the times of J Jayalalithaa.” Dr. Tamilisai Soundarajan has called for the arrests of anyone who opposes the development of Tamil Nadu. H. Raja, a national secretary of BJP, whose social media pages are a virtual study in hate, and who has been openly branding Piyush Manush as a Maoist and a Naxal, celebrated his arrest and also called Thoothukudi protestors Naxalites.

The TN-BJP and its allies have been trying to build a narrative which establishes some dubious links between the labels “anti-development”, “anti-social elements”, “anti-nationals”, “terrorists”, “Naxal”, “Maoist”, “Muslim extremists”, “Christian missionaries”, even “LTTE” and have been fluidly hopping between these various smears, as the situation demands. When Valarmathi was detained under the Goondas act in 2017, the Tamil Nadu police publicly labelled her as a ‘Maoist’ and later corrected that to ‘Maoist sympathiser’. Now Dinamalar, a Tamil daily, which was recently exposed as an enthusiastic media participant in the Hindutva project by a CobraPost sting operation, is running malicious pieces such as one titled “Will NSA be unleashed on student Naxalite supporter?” (Valarmathi). The BJP, deprived of its customary weapon of communalism in Tamil Nadu which remains largely free of religious tension despite its best efforts, has resorted to egging on and even directing the state government to deploy alarming authoritarian tactics against citizens who are simply asserting their rights. While public feeling is decidedly against these opinions, the BJP, AIADMK and actor-turned-politician Rajinikanth, who called for “anti-social elements” to be crushed with an iron-fist, have been voicing them in tandem. 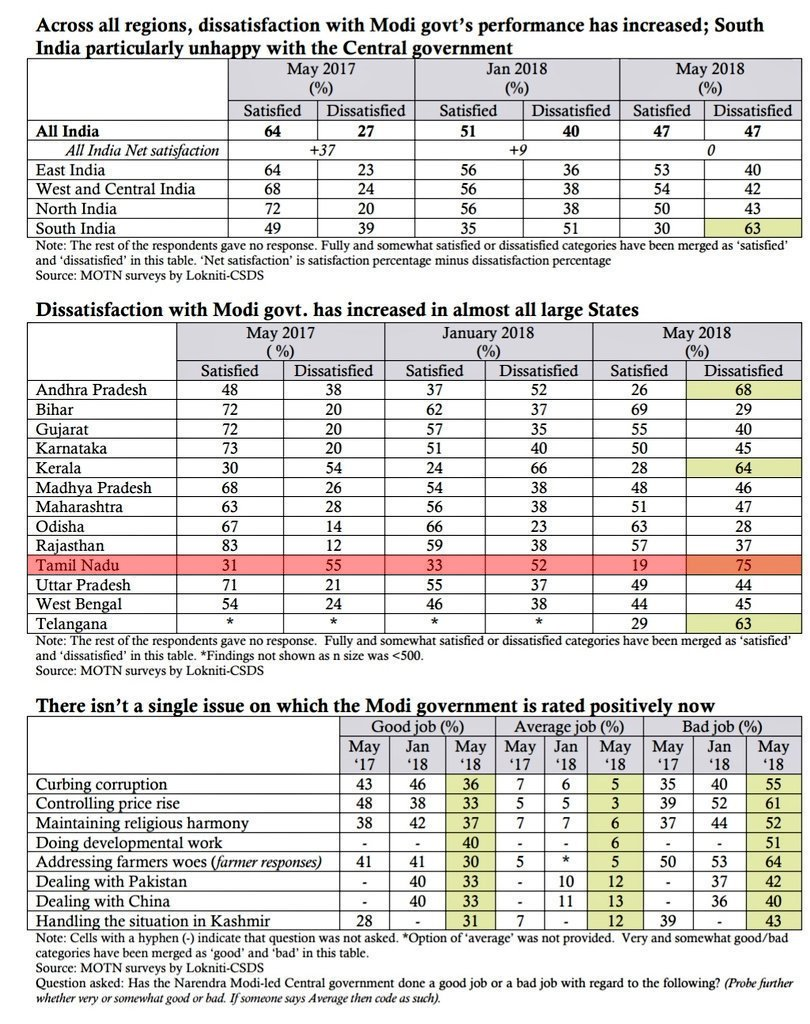 In a recent poll conducted by Lokniti and Centre for the Study of Developing Societies (CSDS) Modi’s government was most unpopular in the state of Tamil Nadu, where 75% of those polled expressed dissatisfaction. But the near complete power wielded by the Bharatiya Janata Party, in a state where it enjoys no support and does not have a single elected representative in the legislative assembly, has damaged people’s trust in democracy and exposed its failings. The strategy of the BJP and Edappadi Palaniswami’s government would appear to be one aimed at not just quelling this or that agitation but free thought and expression themselves, and exhausting the public by launching a sustained attack on those who dare to defy.