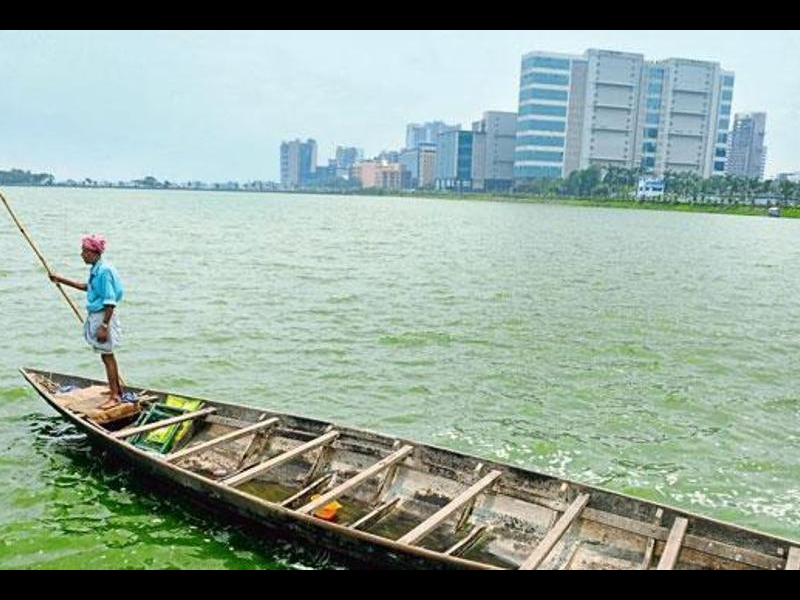 A 7 km long flyover till Dumdum airport, with 192 pillars, has been proposed over the East Kolkata Wetlands, one of the 25 Ramsar sites in the country. Government of West Bengal has already written a letter to the Center, asking for approval. Forum Against Monopolistic Aggression (FAMA) organized a workshop with the assistance of Sabuj Manch, to build up informed public opinion and citizens’ resistance against the disastrous consequences for the city, once these wetlands fall prey to the forces of urbanisation. A groundXero report.

Last Saturday a meeting was organized in a community hall at Kalikapur by Forum Against Monopolistic Aggression (FAMA) to discuss the perils of a proposed flyover that will pass through the East Kolkata Wetlands. This complex system of wetlands is often known for its capacity to treat voluminous amounts of sewage that is generated by the city. Organic waste from the city in turn provide nutrients for agriculture and fish production, thereby generating a local economy.

The proceedings started with Amitava Sengupta of FAMA introducing the history of the forum, started in 2006-07 during the Nandigram-Singur Movements. FAMA grew under the leadership of eminent scientist Abhee Dutta Majumdar, bringing together intellectuals, students and people from different walks of life. “What is being sold as development is actually mal-development! Be it in Singur- Nandigram, Haripur-Nayachar, foreign and national capital is causing disruption of local economy and destruction of air-water-soil in the name of sustainable development,” said Amitava. Speaking of FAMA’s position on the wetlands, he said, “[East Kolkata Wetland] is a matter of pride as it is one among the 25 Ramsar sites* in the country and also the only Ramsar site in West Bengal. It is heard that the government of West Bengal has taken initiative to make the Sundarban Wetlands a Ramsar site too.” He went on to add, “If 4.5km of the proposed flyover pass over the wetlands with 192 pillars then the unique ecosystem of the wetlands is bound to collapse.”

[* The Convention on Wetlands, known as the Ramsar Convention, held in the city of Ramsar, Iran, is an intergovernmental environmental treaty established in 1971 by UNESCO, that came into force in 1975. It provides for national action and international cooperation regarding the conservation of wetlands, and wise sustainable use of their resources. Ramsar identifies wetlands of international importance, especially those providing waterfowl habitat.] 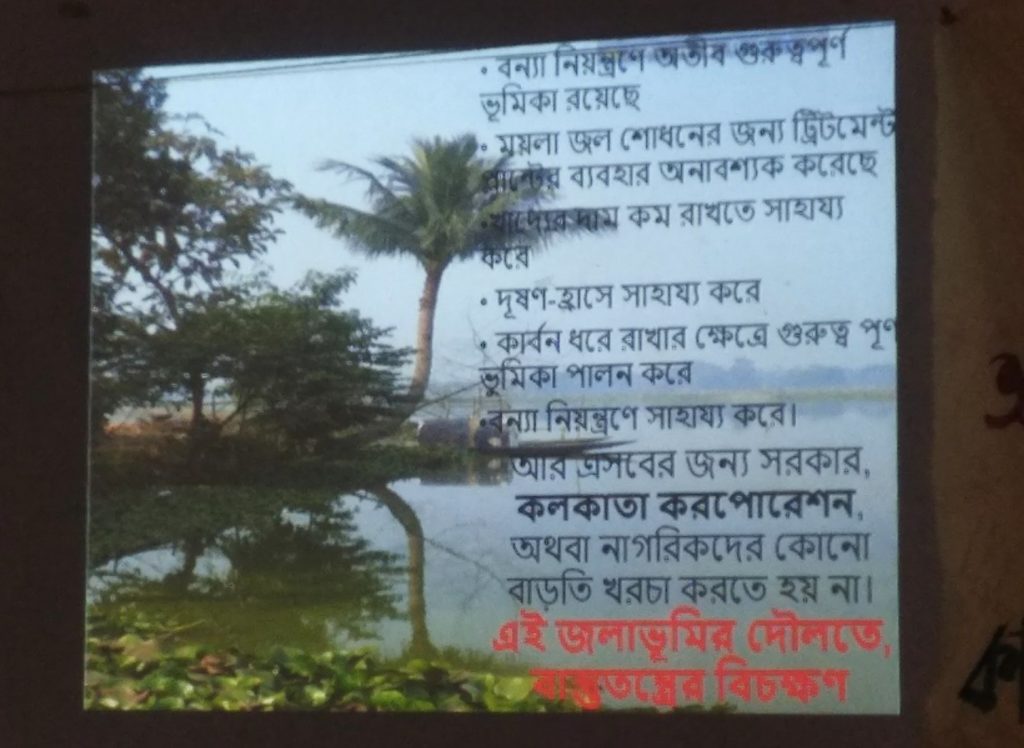 Slide from the meeting. Photo: GroundXero

Shantanu Chacraverti, EC member of Sabuj Mancha, talked about unique ecological characteristics of the wetlands. Through slides and maps he drew the historical and geographical details of the land – the role it plays in flood control and sewage treatment that in turn creates a sustenance economy, not just for the workers but for the city at large. The British canal system had initially planned to dump the city’s waste into river Hoogly. But there were a couple of difficulties – the water of Hoogly was used for drinking purposes, and the dumping had to be done against a natural gradient. The Royal Engineer Forbes then ascertained that there was a natural gradient to the east of the city. The saline water land there, flooded regularly by high tide sea-waters from the Bidyadhori river, was 8.5 ft lower than the lowest point of the city. So when William Clark prepared the drainage and sewage system of Calcutta, he planned to dump waste water from the city into the East. Dumping of large amounts of wastes raised the height of the land over time, and the saline water inflow from Bidyadhori stopped. Decreased salinity then changed the ecosystem of the wetlands. By 1879, nutrients in the water were being used for agricultural purposes. In 1918 Bidhu Bhusan Sarkar noticed that the waste in the water acted as nutrient for the fish and the fish production had grown. Based on this observation, engineer B. N. Ray planned an elaborate water way so that the water that passes through the sedimentation tank is fed to the fish farm and agriculture, then diverted to the canals so that the canals receive cleaner water. In 1943-44 the crucial fisheries feeder canal was constructed to provide the fishermen with water.

Following this, Naba Dutta (General Secretary, Sabuj Mancha) took us through the movement that took place in 1992. It was the citizens’ movement that voiced concerns to protect the wetlands against then proposed ‘World Trade Center project’. The mobilization took place across different strata of citizens, be it through advertisements in the Lady Study Group, the Calcutta Club ads in Anandabazar Potrika, or mobilization based on people’s science movement centered around magazines like Utso Manus, Bigyan O Bigyankarmi, Gana Bigyan Samanyay Kendro. Civil rights organization like APDR, the only fishermen union – CPI(M)-affiliated, till a split occurred during the movement, and the larger civil society – all were actively resisting. The fishworkers’ union secretary Pankaj Makal’s support to the movement was crucial. A rally of over 10,000 citizens took place with eminent people like Dhrubojyoti Ghosh, then CU Vice Chancellor Sushil Ghosh, Ashok Mitra of Civil Services, and so on. Problems concerning the fishing community also came to the forefront and demands were raised for fishermen’s rights over the wetlands. 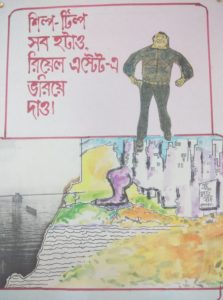 As a result, the court for the first time legally recognized the wetlands, declaring them as a ‘No development zone’, in 1992, even before it was marked a Ramsar site. Dr. Dhrubojyoti Ghosh, the person whose tireless efforts led to the Ramsar recognition, had once remarked, ‘law does not ascertain peace, law provides a chance to fight in the court.’ But over the years, corporates and real estate developers have acquired parts of the wetlands by subverting the law, and are now eying for more. While citizens themselves have tried to protect the wetlands, the government has been complicit throughout; not even a placard or sign board citing the area as a Ramsar Site/ Protected Area has been put up by the Government. “If the government is complicit people will not sit hand in hand, people will take to the streets if necessary, as they did for all other mal-development projects,” reminded Amitava Sengupta.

An RTI was filed in 2017 asking for reports of violation of laws regarding wetlands protection, over last 10 years. The response contained a report for only the last 1.5 years, and even that shows 78 violations – mostly regarding construction in the ‘no development zone’. The East Kolkata Wetlands Authority provided ‘No Objection Certificate’ for such illegal constructions, without any jurisdiction to do so. “Law and order implementation is in disarray under the government which is corporate and real estate biased. The judiciary which is dependent on the same law and order machinery, may favour the proposed project. So the fight is a political one,” commented Mr. Dutta. “The need of the hour is organized resistance”, he added.

Ex-Senior Scientist of Central Pollution Control Board Debopriyo Mukherjee spoke of the gaps that still exist when it comes to research on East Kolkata Wetlands. He spoke of corporate bias in the Pollution Control Board and lapses on the part of the officials in carrying out timely research and taking down authentic data. This, while academic research institutions have, over the years, overlooked parameters, for example, ‘hydraulic retention time’ – the time required for standing water to clean itself through sedimentation. Hydraulic Retention reduces suspended waste content in water, and so does fish farming or agriculture. No systematic study has happened to measure such processes at play in the Wetlands.

Mr. Mukherjee also emphasized the change in the nature of waste, which presently contains high amounts of antibiotic residues, heavy metals and non biodegradable organic waste; presence of hydrogen sulphide and phosphorus. This is leading to the anoxic condition (lack of dissolved oxygen in water) which is causing the death of algae, in turn leading to loss of habitat for the fish. The deteriorating quality of water has affected fish production in the wetlands. He pointed out to the high content of metals found in the fruits and vegetables produced in these areas, and high amount of boron in ground water, concluding by emphasizing on the need for research in such areas. 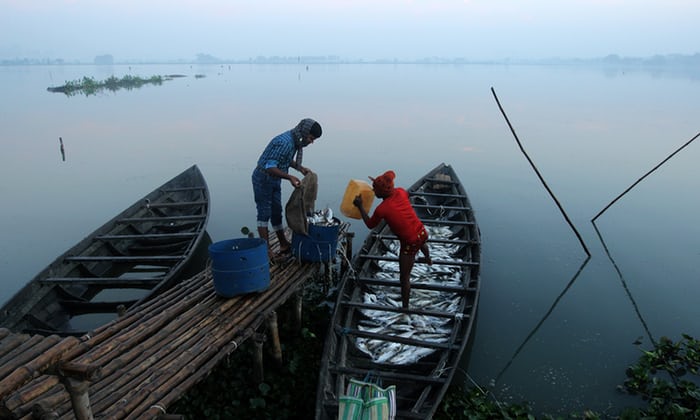 Jayanta Basu, the Chief Organizer of Sabuj Mancha, spoke of the market driven urban pressure on wetlands in a populous city like Kolkata, where around 45 lakh people stay in a 200 sq.km area and 40-50 lakh more people moving up and down daily, while the Eastern Kolkata Wetlands is sparsely populated, where in 150 sq.km area ‘only’ 15 lakh people stay. This sharp difference in population density is bound to create such demand for the land. “We make the best laws in the world but we are worst at implementation,” he exclaimed, while describing the role of the East Kolkata Wetland Authority. He also stated that the role of political parties had been the worst, with none of the parties across the spectrum taking up the issue.

In the discussions that followed, several people spoke of illegal tanneries and marble businesses that are increasing chemical pollution in the local water table, leading to reduction in the production of fish. One of the attendees mentioned that they submitted GPS tracking data of illegal tanneries to the government bodies, but no action was taken. The need for further research and an objective engagement about the ecological benefits was re-iterated by researchers present in the meeting. Plans were made to write to the authorities from individuals and as part of organizatons opposing the flyover project, and of running online campaign for signature collection as further information about the project emerge.