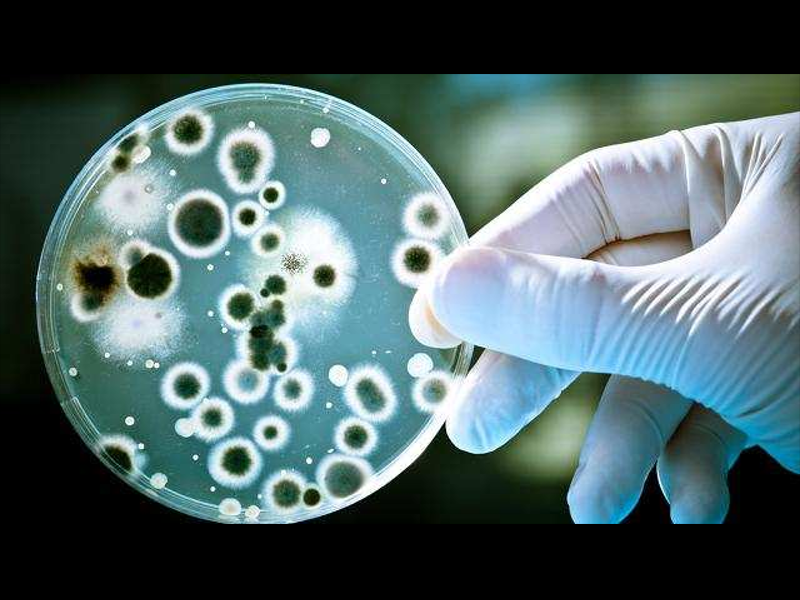 In the history of industrial pollution in India, disasters like Bhopal and resistances like Thoothukudi are watershed moments. In most other such cases, the disaster is more of a slow, everyday process, while the resistance is slow and rendered invisible by the powers that be. In this series, the GroundXero Science Desk unearths the stories of the many Bhopals – the ongoing disasters – causing slow death of lakhs of people across the country, most of whom are socio-economically vulnerable. Current case in point: Patancheru Pharmaceutical Industrial Complex, Hyderabad, Telangana. In the last part, we mentioned about how Hyderabad has become a “giant Petri dish for anti-microbial resistance” owing allegedly to pollution from the pharma industrial complex. Here we look more closely at the global political economic context behind the making of this.

“Drug Pollution” in India: from vultures to bugs

In India during the early 1990s, the number of vultures fell drastically, by approximately 95%. More specifically, vultures feeding on dead cattle, dosed with veterinary formulations of diclofenac, died en masse from kidney failure (Oaks et al 2004). This may well be the first large-scale instance of casualties resulting from “drug pollution.” Dichlophenac happens to a pain-killer drug, and after a public outcry, the Government finally banned the veterinary use of the drug in 2006.

“If the extinction of vultures sounded the first warning bells about pharmaceutical hazards of the environment, the second trigger, which came from a report by Swedish scientists, took the world by storm”, says an EPW article by Geetha Mathew and MK Unnikrishnan. Based on biochemical analysis of effluents collected from Patancheru, the Larsson study of 2007 detected 11 drugs with the highest levels of concentration ever on the planet.

The Larsson study states that pharmaceutical production ‘severely contaminates surface, ground and drinking water in the investigated region and that the previously demonstrated pharmaceutical releases from PETL is still occurring’. The Patancheru Enviro Tech Limited (PETL) is the common effluent treatment plant set up in 1995 to treat the discharge from bulk drug manufacturing units located in the Patancheru area, including Dr Reddy’s Labs, Aurobindo Pharma and Newland Labs. 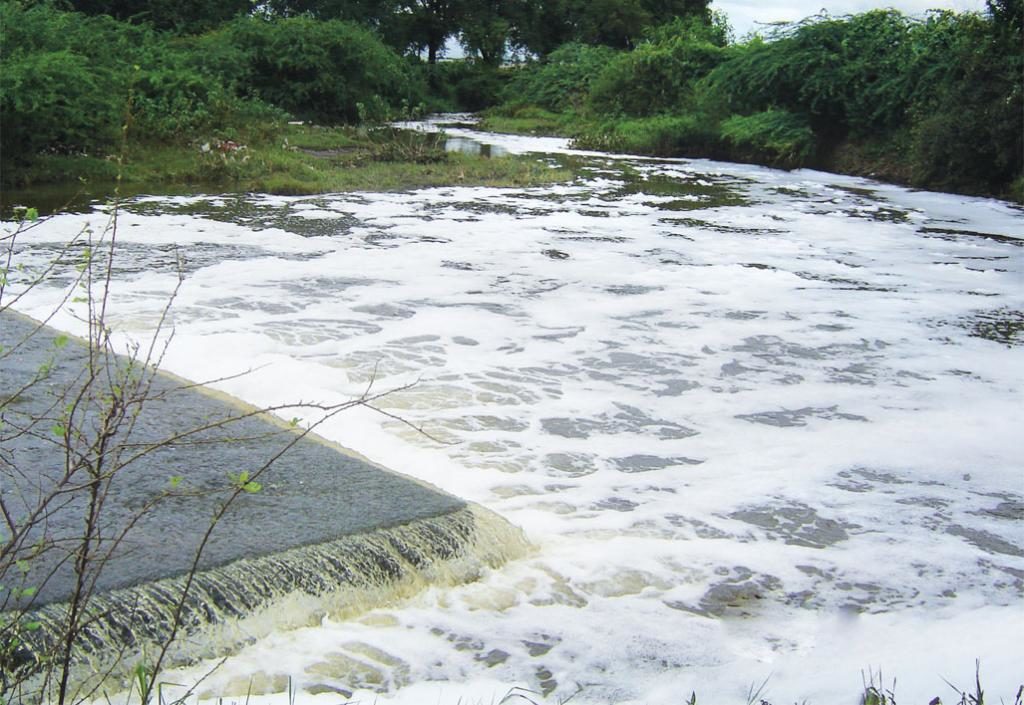 The effluent of pharmaceutical industries at Patancheru finds its way to the Musi river (Photo: Suresh Babu). Courtesy: DownToEarth

According to the local population, the treated effluent from PETL is discharged into the Iska Vagu stream, which then flows into the Nakka Vagu river. This latter runs into the Manjeera river, which ultimately joins the Godavari. Manjeera is the major drinking water source for the city of Hyderabad, while the Godavari is one of the major rivers in southern India whose waters irrigate millions of acres of agricultural land in Andhra Pradesh and Telangana. There are 20 villages in and around the industrial area with an estimated population of one lakh. Plus, there are an additional 75,000 people in the Patancheru suburb. Pocharam and Ganapathigudem, two villages that are located closest to PETL, bear the brunt of this ecological disaster, including the severe contamination of all ground and surface water sources in and around the villages. It is also worth noting that the long-term impact of the disaster will continue to affect the 2 lakh people who live in the scores of villages in and around the industrial area and the Patancheru suburbs.

Waste water from Patancheru showed 150 times the highest levels of pharmaceuticals ever detected in the waste water from US. “The discharge load of ciprofloxacin corresponds to approximately 45 kg of active pharmaceutical ingredient per day, which is equivalent to the total amount consumed in Sweden (population nine million) over an average 5-day period”, says the Larsson 2007 report. According to Mathew, it was estimated that if it were possible to industrially extract drugs from the effluents and sold as tablets, it would fetch approximately Rs 65 lakh per day. In fact, water pollution in India is a much-discussed issue amongst the scientific community. For example, in this report by Indira Khurana and Romit Sen, the extent of pollution has been revealed to be at 70% of all available water in the country. India even has the distinction of having a “superbug” named after it’s capital city – the New Delhi metallo-beta-lactamase I (better known as the NDM-I).

Interestingly, the administrative boundary of Pocharam gram panchayat ends a few feet before PETL. The treatment plant effectively falls in the jurisdiction of the GHMC. Although topographically the village and the treatment plant are contiguous, they are governed by different laws. This means the villagers have to travel to Hyderabad for any matter concerning the plant, while the plant sits on the other side of the Iskavagu stream and the village Panchayat can do nothing.

According to Mathew, then Andhra Pradesh (now AP-Telangana) accounted for 80% of the drugs manufactured in the country, with 34% of the total market share controlled by only the top 10 companies, while more than 1,300 companies supply the rest. The Patancheru Enviro Tech Ltd. Hyderabad, for instance, receives about 15 lakh litres of waste water per day, from 90 bulk drug manufacturers. “The clarified effluent is finally discharged into streams which merge with Godavari and solid waste is used as landfill. The Patancheru disaster was inevitable because smaller companies have very inadequate effluent treatment plants”, reports the article. According to some economists and activists who have looked into the economics of new “greener” methods of drug manufacture, while the bigger companies have the means to install at least some of the new “green” technology, the smaller ones cannot afford the same in a highly competitive global economy, since these new technologies are extremely expensive.

The same multinational pharma corporations which win awards for innovations in “green technology” to reduce eco-toxins also outsource the production of their drugs and the related pollution to these developing countries, where human life is worth far less than the lives of Westerners. The unchecked free market, embodied in the reality of cutthroat competition, means cost-cutting by smaller local companies when it comes to waste treatment and disposal. The Pharmaceutical Research and Manufacturers of America, representing major US drug makers, has stated “we cannot comment about Indian pollution because Patancheru plants are making generic drugs”. The Generic Pharmaceutical Association has said “issues of Indian factory pollution are not within the scope of the activities of our group”.

The Hatch-Waxman Act 1984 (ironically, passed the same year of the Bhopal disaster), outsourced the manufacture of what are called generic drugs to “third world countries” like India and China. Since then, Indian drug manufacturers have accounted for 40% of the world’s drug supplies, and 20% of these exports come from Patancheru alone. A cheap work force, a cheap production process, the ease of flouting environmental and land acquisition laws, and an impossibly low or sometimes no price at all put on the environmental impacts of production in these parts of the world, were the natural reasons for relocating these bulk drug manufacturing industries to these countries. 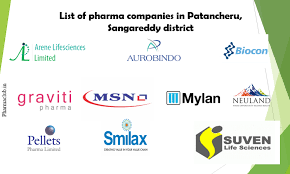 A glaring example of what this looks like at the level of policy-making is the case of the pesticide DDT. While almost the entire world has banned DDT after it was conclusively proved that DDT causes cancer, India led the opposition to a proposal committing to a 2020 deadline for a worldwide ban on DDT at the sixth Conference of the Parties (CoP) to the Stockholm Convention on Persistent Organic Pollutants (POPs) in Geneva in 2013, and got the proposal rejected. In 2013, India was the only country still producing DDT, manufactured by the public sector firm Hindustan Insecticide Limited (HIL). China stopped production of the chemical in 2007. Even earlier, at the Stockholm Convention on Persistent Organic Pollutants in 2011, India was the only country to resist the ban of endosulfan. This was after official reports had acknowledged in 1995 that the use of endosulfan in the plantations in Kerala caused at least 500 deaths (unofficial estimates put the number at 4000). More than 9,000 people were affected by the endosulfan poisoning. Babies had been born with abnormalities, neurobehavioral disorders and congenital malformations. It’s worth noting that in this case as well, India was the largest producer of endosulfan in the world.

The case of the pharmaceutical industry is no different. The Central Pollution Control Board of India and the Ministry of Environment and Forests have ranked the pharmaceutical industry among the 17 most highly polluting industries in India. They have also ranked Patancheru as the 15th most critically polluted industrial cluster within the nation. But the pollution continues unchecked.

According to the Bulk Drug Manufacturers Association of India’s website, India’s pharma exports were valued at Rs. 1,10,522 crore during 2015-16. Incidentally, the total compensation amount for the affected villages, as ordered by the Supreme Court in 1995, was less than Rs. 1.5 crores. Even this meager amount, according to the villagers, was never paid by the industry to the fullest. The Patancheru industrial area has seen longstanding movements by the affected villagers, demanding proper regulation, environmental protection, and compensation for the damages incurred by the local communities, most of whom are small and landless farmers, with a large number of families belonging to socially marginalised castes and religious minorities.

However, despite decades of activism – political and legal – the drug industry continues to expand, flouting regulations at will. The local agriculture and related economy is now in ruins. Agricultural land is getting converted en masse into brick kilns, quarry activities, and real estate.

The story of the impact of these issues on the overall life at Patancheru, and the popular resistances against such grim realities, will be covered in the upcoming pieces in this series.