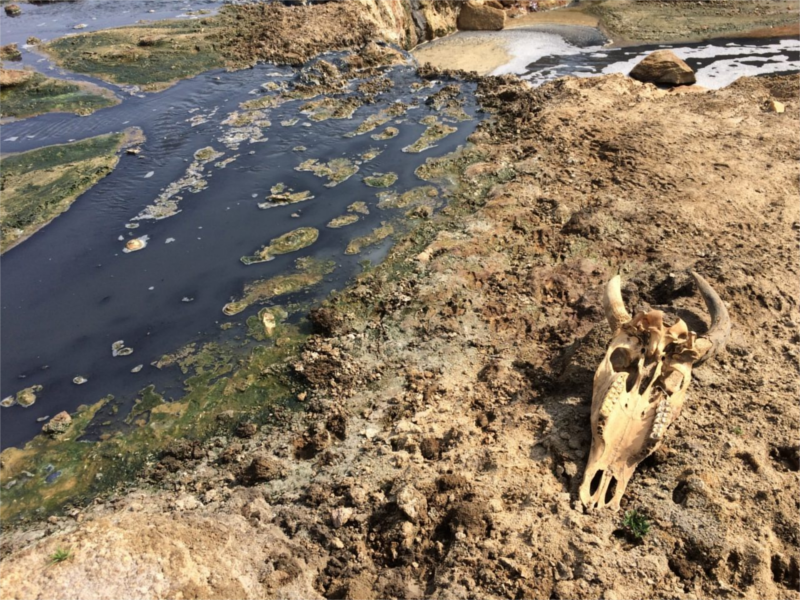 In the history of industrial pollution in India, both Bhopal and Thoothukudi must be seen as watershed moments, either in terms of the disasters themselves, or in terms of the resistances that followed. In most other such cases, the disaster is felt as a slow, everyday process – as something chronic. And the resistance is slow and rendered invisible by the powers that be. In this series, the GroundXero Science Desk unearths the stories of the many Bhopals – the ongoing disasters – where chemicals are leaking into the environment from chemical factories every moment, one drop at a time, causing slow death of lakhs of people across the country, most of whom are socio-economically vulnerable. Current case in point: Patancheru Pharmaceutical Industrial Complex, Hyderabad, Telangana.

Last month the entire country bore witness to the shocking killings of tens of protesters in the coastal city of Thoothukudi (also called Tuticorin), Tamil Nadu. Residents from Thoothukudi and surrounding villages had come out onto the streets by the tens of thousands in order to protest the proposed expansion of the copper-smelting plant, Sterlite Copper of Vedanta Ltd. Then the police opened fire on them. While these protests have been going on for decades, it is only now that Thoothukudi finally caught the nation’s attention owing to the martyrdom of its residents. Here are some of the reasons they have been protesting.

Five years ago, on March 23 2013, a toxic leak from the Sterlite factory injured hundreds of people. Even the staff and patients at the Thoothukudi Medical College Hospital, 7 km away, experienced uneasiness, suffocation, and a burning sensation in the eyes, among other symptoms. A similar gas leak on July 5, 1997 injured hundreds and left at least 90 people hospitalised.

In 2008, the Department of Community Medicine, Tirunelveli Medical College submitted a report titled “Health Status and Epidemiological Study Around 5 km Radius of Sterlite Industries (India) Limited, Thoothukudi”. This was a comparative analysis of the health status of 80,725 people of Thoothukudi, measured by comparing their health to the average in the state and other locations that did not have major industries. The study revealed, among other things, that the iron content in the groundwater in Kumareddiapuram and Therku Veerapandiapuram, the sites of the ongoing protests, were 17 and 20 times higher than permissible levels. The incidence of respiratory diseases was 13.9% in the areas surrounding the factory, significantly higher than in areas without industry. Meanwhile, the incidence of asthmatic bronchitis was 2.8%, more than double the state average of 1.29%, and so on. The study also found that there were significantly more people suffering from Ear, Nose, Throat (ENT) disorders, particularly pharyngitis and sinusitis, near the factory. “Women in the [study] area had more menstrual disorders, like menorrhagiae and dysmenorrhagiae … it needs an in-depth study,” the report stated. At the time of the study (2006 and 2007), Sterlite had been operating at a far lower production capacity of between 70,000 and 170,000 tonnes of copper anode per annum (tpa). “Since 2007, Sterlite has been operating a 400,000 tpa smelter, nearly six times larger than what it began with in 1996.” The primary victims of the Thoothukudi disaster are the local population comprising of poor fish-workers, agricultural labourers, and factory workers, most of whom cannot afford to relocate and lack the means to pay for proper medical treatment.

Let’s go back 34 years in time. In the deep night of 2-3 December 1984, the world witnessed one of the most disastrous chemical plant accidents of all time, when the Union Carbide plant released more than 40 tonnes of methyl isocyanate gas. The leak killed more than 3800 people in one night, and its aftereffects would kill many thousands more over the next years. Union Carbide Corporation and its owner Dow Chemicals, one of the biggest industrial giants in the world, continue to deny that Methyl Isocyanate – the Bhopal gas – had anything to do with the health of those exposed to the disastrous gas leak. They have till now refused to pay proper compensation to victims of the disaster, even as their profits have only soared over the decades. The people who were the main victims of the leak were primarily from poor Muslim and dalit households of Bhopal. Many were workers at the plant, or their family members. To be sure, it is important to note that nationwide popular protests after the Bhopal killing triggered political movements and dialogues which created and enacted the Environment Protection Act in 1986. We will come back to the EPA and its current status and rollback later in the series. 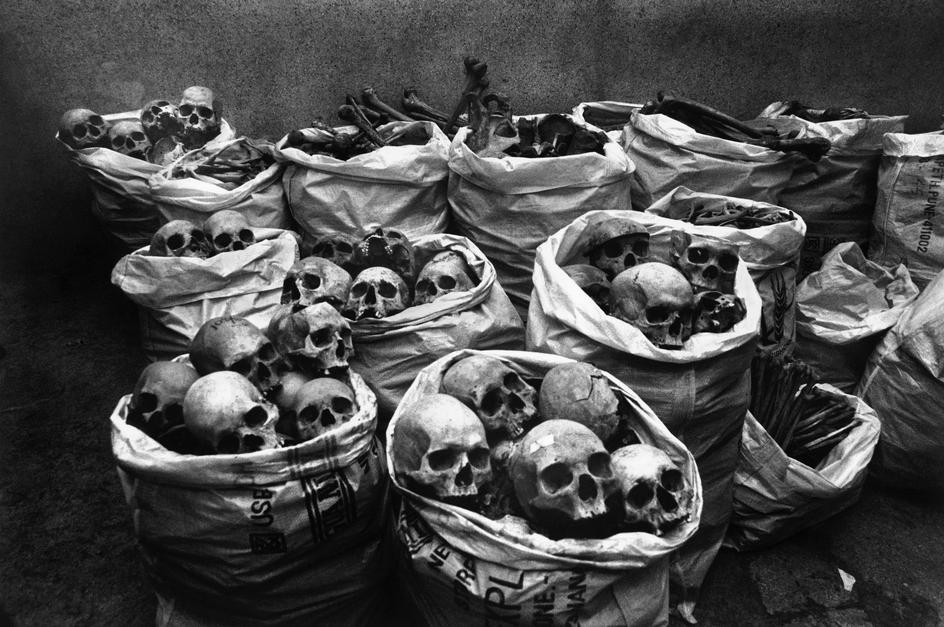 Skulls of Bhopal victims, discarded after research at the Hamida Hospital. Medical experts believe that the toxic gas inhaled by the people of Bhopal may have affected the brain. Courtesy: Raghu Rai.

While Bhopal witnessed a watershed moment in history in terms of the catastrophic proportions of the disaster itself, the name of Thoothukudi perhaps will be etched in textbooks in terms of the resistance that followed. However in most other such cases, the disaster is felt as a slow, everyday process – as something chronic, so to speak. And the resistance, too, is slow and often rendered invisible by the powers that be. In this series we try to unearth the stories of the many Bhopals – the ongoing ones – where the chemicals leaking into the environment from Chemical factories are causing slow death of lakhs of people across the country, most of whom are anyway living on the edge, socially and economically. We begin with Patancheru, in Hyderabad, Telangana.

“The genome valley of India”

In March 2018, a team of scientists belonging to the Centre for Antibiotic Resistance Research (CARe), Institute of Biomedicine, and the Department of Mathematical Sciences, at University of Gothenburg, Sweden, published a report based on scientific analyses of water and soil samples from the Iska Vagu river flowing through the Patancheru area in Medak district, Telangana (on the outskirts of Hyderabad), where they declared the discovery of seven new antibiotic resistant genes, so-called “superbugs”. One of these genes, termed blaRSA2, can neutralise a group of antibiotics called carbapenems, currently used as medicines of the last resort for patients suffering from severe multi-bacterial infections such as E.coli, urinary tract infections, acute pneumonia, skin, soft tissue and deep throat infections, meningitis, kidney infections, bronchitis, and several other bloodstream infections. According to a report by the New Indian Express, “a bacteria possessing the resistant blaRSA2 gene can transfer its resistance to another bacteria in the environment or even to pathogenic bacteria that cause diseases in humans, thus making them resistant to Carbapenems”. Put simply, what this means is that this particular drug resistance can be readily passed on to other bacteria cells, making them resistant to these drugs in turn. Five of these new genes were found to be resistant to the Beta-lactam class of antibiotics, which includes antibiotics like derivatives of penicillin and cephalosporins. One of these was found to be resistant to aminoglycosides. These are all antibiotics that form a vital component of some of the most commonly used and critical drugs for the sick. No wonder all this has resulted in the recent dark nickname of Hyderabad – “the Genome Valley of India”. Ironically, this nickname was originally coined by the government-industrial nexus to advertise Hyderabad as an attractive location for the Indian pharmaceutical business. “Genomes” have become synonymous to superbugs.

A reservoir collects water from nearby pharmaceutical plants in Patancheru. Courtesy: Chemical and Engineering News

Let’s consider the drug meropenem, an antibiotic based on carbapenem. One of the companies that sells this drug is AuroMedics Pharma Inc, a US subsidiary of Aurobindo Pharma, one of the biggest international drug manufacturers. Aurobindo Pharma has several manufacturing units in Patancheru, such as the one in the village of Kazipally, and has been held responsible by several scientific studies and the local population for dumping chemical waste into the local streams which flow into the Iska Vagu and finally into the Godavari. It is alleged that this practice of dumping chemical compounds into the local ecosystem by drug manufacturers is what leads to drug resistance in bacteria and other living organisms, which means drugs such as meropenem may soon lose their effectiveness against harmful bacteria.

The team of Swedish scientists referred to earlier issued several reports over the past decade, tracking the pollution of the water table of Patancheru area through effluents discharged from these drug-making units. On 29 September 2016, Reuters also published a report claiming that “the presence of more than 300 drug firms, combined with lax oversight and inadequate water treatment, has left lakes and rivers laced with antibiotics, making this a giant Petri dish for anti-microbial resistance”.

“Combined with the mass misuse of antibiotics and poor sanitation, superbugs are already having severe consequences in India. For example, an estimated 56,000 newborn babies die from resistant infections there each year” reports The Bureau of Investigative Journalism. In the next article in this series, we look more closely at the global political economic context behind the making of this “giant Petri dish for anti-microbial resistance”.