People’s Movements, Conspiracies and Theater of the Absurd

“Kaath ki handi baar baar nahi chadhti (Wooden cauldron can be used only once)”. This is not the first time we are witnessing high-profile conspiracies when elections are around the corner. While the faces of the “conspirators” have changed, the storyline is uncannily similar. GroundXero digs into the recent bouts of alleged death threats on powerful Indian politicians.

On 27th September 2002, two armed attackers entered Akshardham temple premises in Gandhinagar, Gujrat. They killed 30 people and injured more than 80. Both of the attackers were killed by the security forces in the confrontation that ensued. In what followed, 6 people were arrested. They were eventually acquitted by the Supreme Court more than after a decade in 2014. The top court made very strong remarks against the police investigation and went to the extent of calling out the role of then Home Minister of Gujarat as “non-application of mind”. But what had already followed in the aftermath of the Akshardham attack was a series of encounters by Gujarat police, who claimed that “terrorists” were out to kill then Gujarat Chief Minister Narendra Modi. From 2003 to 2006, there were 22 police encounters and all of them had almost had the same story line. Terror operatives apparently coming to Gujarat with the plan to kill the Chief Minister and the Gujarat cops foiling each and every attempt. Before any such assassination could have taken place, the police would kill the terrorists. Amongst such cases, the one that gathered media attention were that of Ishrat Jahan, Sadiq Jamal, Tulsiram Prajapati and Sohrabuddin Sheikh. Many of these encounters have been dubbed as fake, and the top cops of Gujarat Police like DG Vanzara had gone for long periods of incarceration for their role in these killings. Questions were also raised on the role of current BJP president Amit Shah and he also had to face jail time over his involvement. Incidentally, 2007 was the year of Gujarat Assembly elections. Total seats: 182. BJP: 117, INC: 59.

The script as was seen by many during that time was that Narandra Modi because of his Pro-Hindu image had to face the brunt of Muslim religious fanatics. Through this posturing of being a victim of Muslim fundamentalism and Islamic terrorism, he consolidated his image of Hindu Hriday Samrat. An image that would give him returns in the form of clear majority in Gujarat state assembly elections – elections that were contested on very personalised imageries of Narendra Modi.

Come 2014, in the month of March just prior to the polling for the General elections, again 4 terror operatives were arrested from Rajasthan. It was claimed that these were out on with a plan to kill the BJP’s Prime Ministerial candidate Narendra Modi. Prior to this, from November 2013 to January 2014, several media outlets such as TV9, OneIndia, and even ANI, reported that Indian Mujahiddeen terrorists are out to kill Narendra Modi and other senior BJP leaders, quoting mostly “unnamed sources”. On 20th March 2014, the BJP citing these media reports, conducted press meets and sent a delegation to meet with the Home Minister to submit a memorandum, which read: “It has come to our notice that several sections of the media have reported, based on IB sources, that there is a threat to our leaders and this threat could even lead to kidnapping. It was suggested in these media reports that the motive behind such a heinous act could be to obtain the release of the terrorist Yasin Bhatkal.” Interestingly though, the news reports which had triggered these news conferences and memorandum to the Home Ministry, are nowhere to be found anymore. The only such report now appears on Niticentral, a BJP mouthpiece. Nirmala Sitharaman’s press conference and Ravi Shankar Prasad’s interview to the press after submitting the memorandum were carried prominently but no channel or newspaper bothered to dig up the media reports which had indicated the existence of such alerts and threats. Though the major plank for BJP’s election campaign in 2014 was “development” and “Gujarat Model” spearheaded by Narendra Modi, Hindutva agenda was also on the cards. Here as well, the election campaign was around the personalised image of Narendra Modi. The lurking danger around him fitted well with BJP’s narrative of Anti-India forces getting uncomfortable with his increasing popularity and thus there were threats around his life. 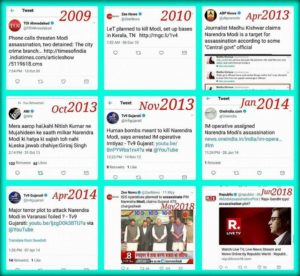 After four years of Modi government, with unfulfilled poll promises of employment and development, the discontent against this regime has been on the rise. With just one year prior to the elections, BJP finds itself in an uncomfortable position especially after the by-election reversals of Gorakhpur and Kairana. It thus seems that it has resorted to the tried and tested mechanism of posturing Narendra Modi as a victim, not just of all the opposition parties coming together against him, but also a victim of mortal threats to his life. A strategy that has reaped dividends in the past on many occasions, one that presents him both as a crusader and as a victim, constantly in mortal danger.

Both the timing and content of these recent letters that are supposed to be “incriminating evidence” of a Maoist plot to kill the Prime Minister, deserve attention. Yet another election is knocking on the doors of the Indian polity, and yet again, there seem to be “assassination plots” being hatched (and unearthed) against the lives of important political leaders of the ruling regime. Over the past 4 years, the Indian electoral politics has seen a sharp decline of mainstream political opposition to the ruling BJP. The Congress, after being routed in the 2014 elections, has still not able to posit itself as a force that can take on the well oiled election machinery of BJP. The regional parties, have also seen shifting of their vote base, and even sections of their leadership, to the BJP and have struggled to offer pro-people alternative in elections. In such a situation, the main oppositional force to the ruling regime is really from mass mobilisations on issues such as rising violence against Dalits and Muslims, peasant mobilisations against the crumbs that are being offered in the name of loan waiver, anti-displacement and many other such movements. This is the current political context in which anti-caste social activists, people’s lawyers fighting for civil liberties, professors and anti-displacement activists working for people’s movements, are getting incarcerated.

There are many questions regarding these various sensational letters that are making loud rounds of mainstream media studios. Questions such as: How can a letter dated 2 January talk about fact finding plans for 6th December in the future tense (courtesy: Sakal Times)? Why did the letters received by Maharashtra CM Fadnavis at least a week ago get produced to the police and the media only now after these arrests? Why did the IB intelligence report regarding ISI plot to kill Narendra Modi have to wait for more than a year till exactly these arrests before it became known? Why is suddenly everyone, including even Milind Ekbote’s family, receiving death threat letters at around the same time? Why does a banned party’s communication mention everything and everyone including funds for ammunition in the same letter in such clear terms? Why does the police remand order for the 5 arrested people make no mention of the “plot to kill the PM”? etc. etc. All of these questions have to be now answered in the court, and we can only wait for the facts to come out.

But for now, the fact is that, people’s activists and leaders of democratic struggles are being incarcerated on dubious grounds. Mass movements outside of the strict confines of the Parliament are being targeted, and the clear goal seems to be to dry out any kind of significant political opposition well in advance of the 2019 General elections. It is important to note that while on the day of the arrests, the mainstream political-media rhetoric was the arrest of “dalit activists”, who were planning to “break the nation” through their “caste politics”, particularly post Bheema Koregaon, within 24 hours, the rhetoric was switched over to Naxalite-Islamist conspiracies, alleged assassination plots, etc. Attacking anti-caste, anti-communalism, anti-displacement movements in effect, while weaving a parallel narrative of Naxalite-Islamist mechanisations on the sovereignty of the nation – while it is not clear what the “two line struggle on the urban front” from “Comrade R’s” letter really means, it is quite clear what the “two line” tactic of the Government looks like.

The increasing tendency of the government and a large section of the media to interpret almost every form of grassroots political movement through a lens of conspiracy has its own peculiar politics. Using the lens of conspiracy leads to a stark trivialization of the popular demands that social movements bring onto the fore. In a very conspicuous way, thus, the conspiracy lens has lead us to remove our eyes from the actual work the five arrested activists did. Questions have not been raised in the mainstream media about the social movements they represented, and the demands that had been formed within those social movements. During a time when the nation has witnessed the emergence of so many vital social movements, this is indeed a potent strategy of political erasure, which reveals the state-mainstream media nexus in the creation of a political hegemony where there is no place of dissent, popular or otherwise. Mainstream media for instance has completely erased the fact that Sudhir Dhawale is an editor of the journal called Vidrohi. There is zero attention on the kind of content that Vidrohi has generated over time. Similarly we won’t find any mention of the kind of work that Adv Surendra Gadling has been doing when it comes to providing legal support to the most marginalised, or about the writings of Shoma Sen.

Just plain threats??? What kind of morons are there in establishment?? They should have gone into action mode of disappearing you… No one needs you in this country… we are fed up of your lies and narratives

Coming back to conspiracies and alleged assassination plans, the list of people in recent times who have been publicly threatened with death, rapes, etc., is unending. The targets of such threats include people from all kinds of backgrounds – journalists like Ravish Kumar, particularly women journalists like Barkha Dutt, Anjana Om Kashyap, Neha Dixit, Rana Ayyuub, Gauri Lankesh and numerous others, women students like Gurmehar Kaur, women professors at DU, activists and politicians like Jignesh Mevani, Umar Khalid, Pinarayi Vijayan, actors like Deepika Padukone, lawyers like Prashant Bhushan, in addition to common people who trade and raise cattle, Muslims in Gujarat and Bengal, Kashmiris, those who oppose Ram Mandir, etc, etc. All of these people became targets for a common reason: Either because of their work, or opinions, or just mere existence, they were all considered as roadblocks to the establishment of the Hindu nationalist hegemony. In all of these instances, though the person(s) issuing such threats were completely open about their identities and political affiliations and sympathies, no steps were taken by the Government to bring them to justice. 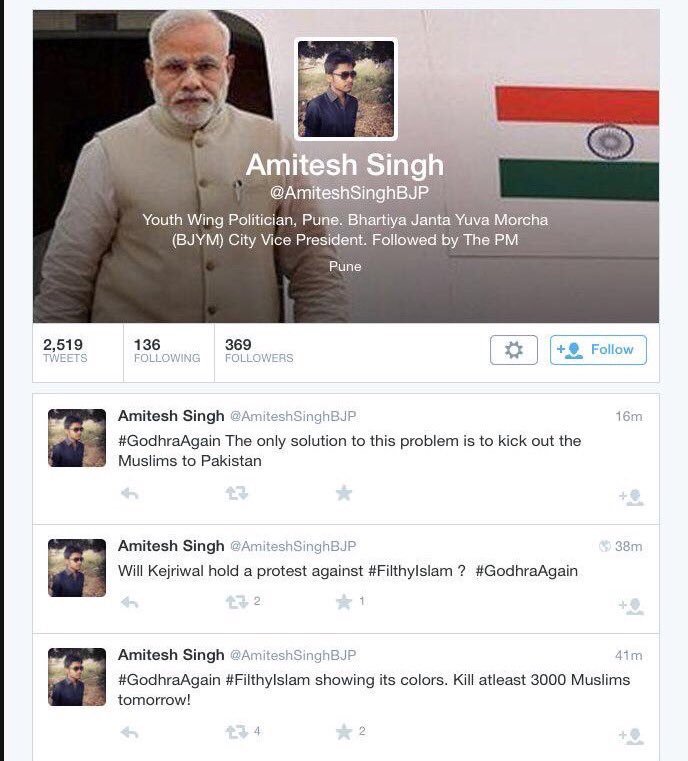 If the Government wanted to act in such cases, it would not even need to base it’s investigation on dubious letters. In fact, in many of these cases, the people conspiring murder in public were rewarded or appreciated in various ways – either through career advancement in their respective political organisations, or through the PM and other high officials endorsing and subscribing their social media accounts. As fas as mainstream media is concerned, while threadbare discussions are going on 24×7 in flashy news studios about these letters in question and their validity, maliciousness, etc., paradoxically (or perhaps not), the absolutely straight-forward, factually established and evident public murder-rape threats issued in broad daylight, are being unapologetically ignored, with complete brazenness. 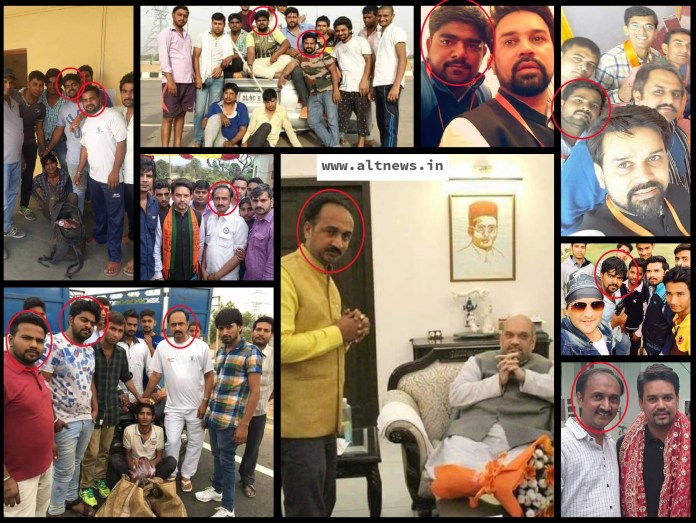