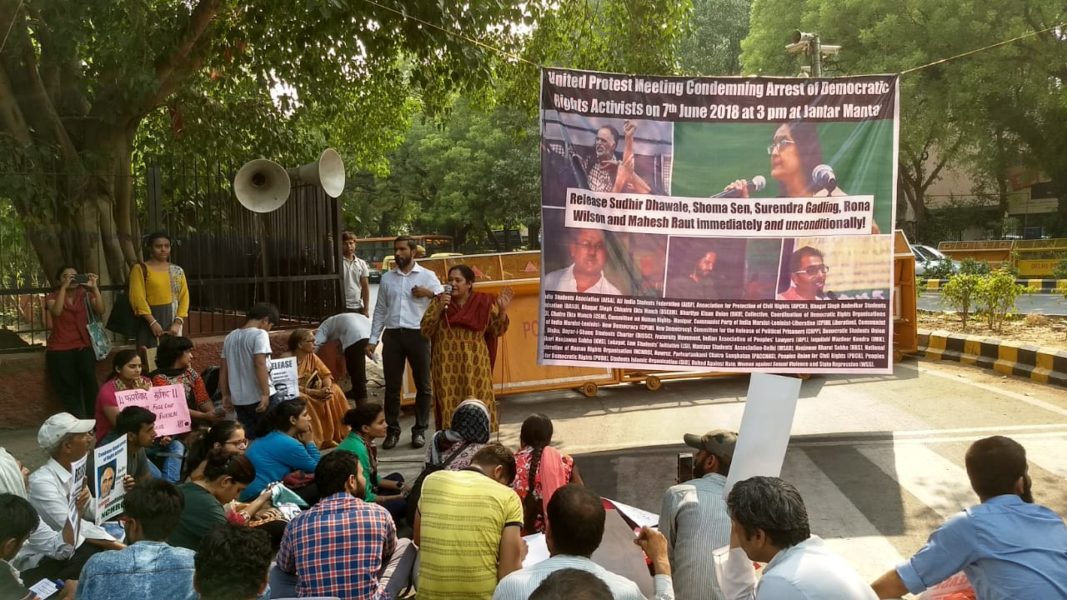 On June 7, 2018, under the united call of 27 organizations, a rally was organized at Jantar Mantar, Delhi, protesting the arrests of lawyer Surendra Gadling, cultural activist Sudhir Dhawale, professor Shoma Sen and activist Mahesh Rauth from Nagpur and CRPP Press Secretary Rona Wilson on June 6, 2018. Attended by activists, students, lawyers and intellectuals from the city and beyond, the rally demanded the immediate release of the concerned activists.

Directing the audience’s attention towards the increasing undemocratic political climate in the country and the increasing state culture of throttling the dissenting voices, most of the speakers, emphasized the need for a larger left and democratic forum as one of the foremost political imperatives of the hour. Speaking on the ways in which the term “Maoist” has come to be used by the Indian state to evoke and sustain a machinery of fear, lawyer Sudha Bharadhwaj said, we need to get over our fear of being branded as Maoists.

Others also spoke about the ways in which terms such as “Maoist” and “Naxal” have come to be deployed by the Indian state as synonymous to “terrorist”, thus evacuating the former of any political history and resonance. Discussions were also held about the politics of the draconian laws such as UAPA, and how they have been used throughout the nation to frame organizers of people’s movements as “seditious.” Demands were raised to repeal the draconian laws such as UAPA.

The Nagpur District Bar Association (DBA) called for an abstention from work today (8th June, 2018) to protest against the arrest and subsequent human rights violation of Adv. Surendra Gadling. In a statement submitted to the Hon’ble Principal District Judge, Pune, it voiced concern over the fact that Adv. Gadling had not been allowed to meet his lawyers. When his lawyer Susan Abraham tried to meet him, she was informed that he would instead be represented by Adv. Malviya, who had not been appointed by Adv. Gadling. This is an instance of a clear violation of his rights, and an appeal was made to let Adv. Gadling meet his own legal representatives. Protests have also been organized in Mumbai and Hyderabad against the arrests.