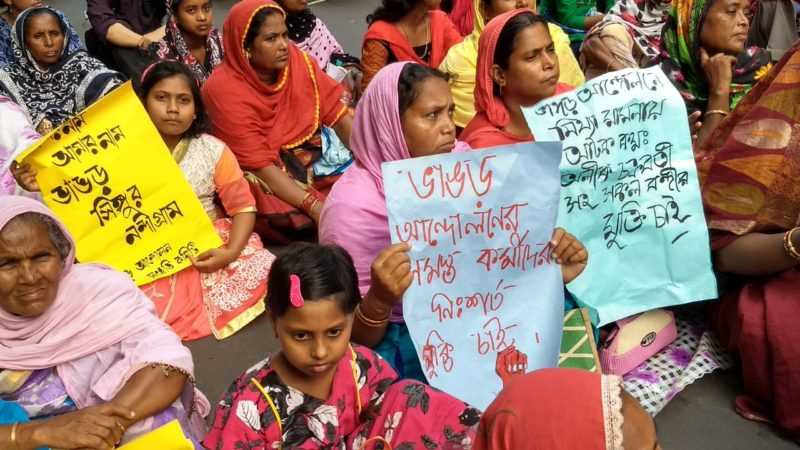 On 4 June, under the banner of Bhangor Solidarity Committee, a rally marched through the streets of Kolkata, demanding the immediate release of Alik Chakroborty, one of the leaders of the anti-PowerGrid people’s movement in Bhangor, and other activists associated with the movement, arrested by the Trinomool Congress government on false charges. 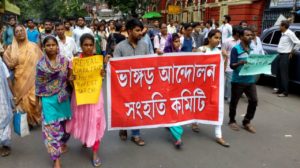 The protest rally comprising of students, youth, children, women, workers, human rights organizations, along with people from Bhangor, demanded the repeal of draconian UAPA, under whose provisions activists from people’s movements are being regularly arrested and put behind bars. The rally was led by families of Bhangor martyrs Mofizul, Alamgir, Hafizul, and activists who were recently released on bail after being in jail for nearly two months.

Earlier, on 31 May, Alik Chakroborty, who was leading Bhangor’s resistance movement, was arrested by a team of police officers from near Kalinganagar hospital in Odisha. Alik had gone there for treatment for a chronic liver ailment from which he was suffering. He won’t get treatment in this state with the police and TMC baying for his blood.

The police couldn’t dare arrest him from Bhangor. Bhangor has protected him in spite of unabashed police and TMC terror. They had faced bombs, their houses were attacked in mid-night raids, their shops were burnt, friends and family members were arrested and tortured. But Bhangor never betrayed their dear leader. Bhangor carried the bullet-ridden bodies of its sons on its grieving shoulders, but never bartered its leader to state power.

The police tapped his mobile phone, followed every bit of his movement, and finally arrested Alik from hospital in Odisha. He was brought to Kolkata on a transit remand, and produced in court. The police have slapped 67 criminal cases against him including many under the UAPA provisions. The court has granted 10 days police custody.

On the day Alik was arrested, four other activists associated with Bhangor movement, Sankar Das, Amitabha Bhattacharya, Biswajit Hazra and Ratul Banerjee got bail after spending two months in prison. They were arrested when they went to the Bhangor police station to file complaint against TMC goons who had forcibly prevented the people of Bhangor from filing nomination papers to Panchayat Elections. Even on the day of the Panchayat polls, amidst widespread violence and intimidation, the people of Bhangor resisted booth capturing by TMC goons. The police, instead of ensuring free and fair polls, arrested four activists, Sheik Azim, Joynal Abedin, Akbar Mollah and Sariful Islam, belonging to resistance movement. All four are still in jail. 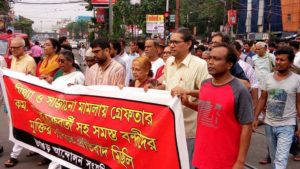 Recently released activists walking in demand of release of Bhangor movement activists who are still in jail. Photo: GroundXero

The 400kv/200kv power grid substation in Bhangor is being constructed under a USAID project called ‘Four Borders Project’. The objective of this project is to facilitate cross-border electricity trade among India, Bangladesh, Bhutan and Nepal. Originally the substation was supposed to come up in Rajarhat. That is why the official name of the project is ‘Rajarhat-Purnea 400/200 KV double circuit line’. However, the land-mafias and promoter-syndicate groups patronized by the ruling Trinamool Congress Party in Rajarhat opposed the project apprehending that the land and real estate price may crash. Therefore, the proposed site of the substation was changed illegally (without even changing the official name), from Rajarhat to Bhangor. 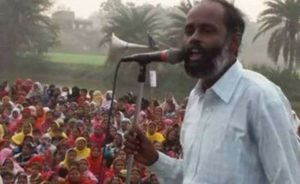 Though the objective of the project is to facilitate cross-border electricity trade, the ruling party and mainstream mass media heavily propagated that this project will improve the conditions of electricity supply in Kolkata and surrounding areas. The government’s attempt to set up the power grid project on the forcefully acquired 13.5 acres of land in the middle of a densely populated and highly fertile farmland in Bhangor, South 24 Parganas district of West Bengal, is to strengthen the capacity of the trade corridor with Bangladesh, removing congestion in the Farakka-Malda transmission line. The aim of spreading propaganda regarding improving power conditions of Kolkata and surrounding areas through the Rajarhat substation was only to neutralize the urban middle class and their “intelligentsia” in Kolkata, from sympathizing with the movement. The West Bengal government acquired this land using the Land Grab law of 1894, against which the glorious historic struggles of Singur and Nandigram were fought. These, and other such anti land-grab struggles across the country led to the enactment of the new Land Grab law of 2014. It is interesting to note that Bengal’s TMC-led Government acquired the land in Bhangor on 31st December 2013, exactly one day before the new law was going to be introduced. This is even more ironic when we consider the fact that it was the political energy from the same struggles of Singur and Nandigram that Mamata Banerjee rode upon, to capture State power in 2011. Not surprisingly therefore, at the time of coming to power, Ms. Banerjee had declared that her government would not acquire land from a single unwilling farmer. But in Bhangor, fierce state repression of an unprecedented nature was launched on the movement, the villagers and their associates.

The TMC govt and its administration are of the view that the people’s resistance to power grid has been instigated by outside “ultra-left” activists led by the likes of Alik Chakroborty. Their strategy from the beginning therefore has been to arrest, detain and isolate the left activists from the movement. This was accompanied by unprecedented armed violence and terror on the villagers who are part of the movement, by local TMC strongman and land–mafia Arabul Islam. For the past two years Bhangor is facing this twin attack by police and ruling party land mafias trying to crush the resistance. Arrest of Alik is a definite setback for them. But they still seem confident and resolute in their struggle to protect their land, ecology and environment from the jaws of big capital and big “Development”.