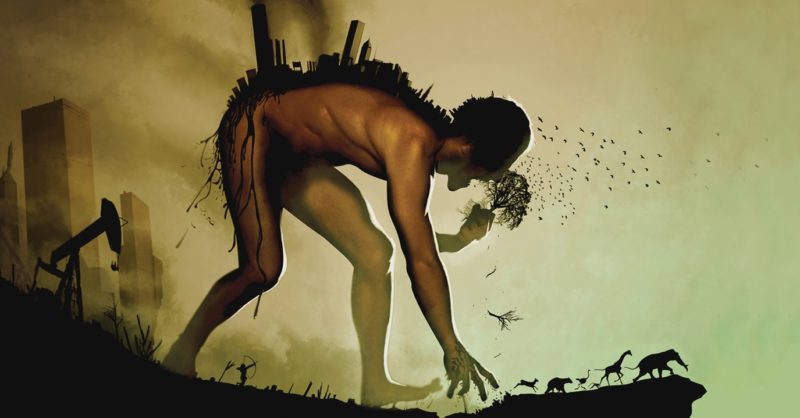 Nothing much could be done because the world is not really a single world. It never was. Despite UN and the intergovernmental big shows, the world never behaved as a species. It was not the species per se that logged the primeval forests, dug up the Earth for coal and oil and gold, colonized the continents and polluted the soil, rivers and the seas. In the name of growth and spreading civilization, militarily powerful profiteers had wantonly and playfully destroyed the environmental fabric of the planet through extraction, rent-fixing and plunder. Soumitra Ghosh writes.

Another June 5 is here. On this particular designated day every year, governments the world over and the people ruled by them celebrate environment. Colorful marches, discussion panels and seminars are held in the cities. State leaders, big businesses, big media and NGOs pledge their unflinching support for the cause. Let’s go sustainable, we hear, let’s not pollute. Plant trees, build solar and yeah, no more plastics please, the world has found out that plastics foul up the environment. Good, fulsome words. Affirmative visuals. Don’t you worry, it’s manageable. If there are problems, we have suitable fixes all lined up. If there is a crisis (is there one really?), we would fix it in no time. We would think about it later. For now, let’s observe the day. June 5. World Environment Day.

Well. Well. And well. Like many of his perfectly well meaning friends and colleagues, this author believed in June 5 and world environment and working together and celebrations and general hunky-doriness that usually goes with such universal ‘days’: he wrote good unpolluting sustainable placards and ritually displayed those on street junctions, thus spreading light and sweetness (er, awareness) liberally, while contributing his bit of ‘doable’ ‘concrete action’ in the general stand-for-environment-feel-good jamboree. Environment is all awareness and if needed, a little enforcement. Oh yeah. 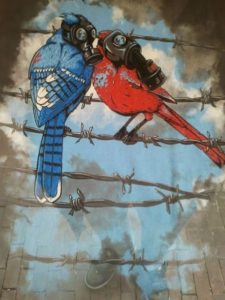 One more June 5, like many others in the past. Unfortunately, it would disappear too, leading to June 6 and June 7 and so on, to other universal days and other celebrations, until yet another June 5 comes, leaving memories of togetherness and yes-we-can, images and audios of affirmative concrete pledges jostling each other in the blue digital yonder and a world choked to death with not only plastic bags and bottles and sachets and wrappings but all kinds of conceivable and inconceivable garbages, pitilessly piling up all the time the world has been celebrating. A world so fouled-up that no amount of sustainable good wishes would be able to redeem it. 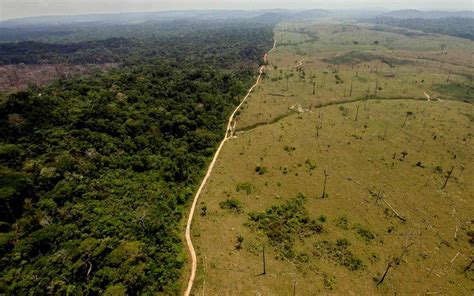 A deforested area near Novo Progresso in the northern Brazilian state of Para. Every year, we lose an area of rainforest that is the size of Panama (FAO). Source: Internet

Don’t get it wrong. I have nothing against affirmative actions and togetherness and celebrations. Or world days, for that matter. It’s just that there simply is no world beyond the intrinsically physical, planetary boundary. Environment, let’s not forget, is something very physical and natural, with in-built thresholds and limits. If those thresholds and limits have been transgressed and violated at will for centuries, you can’t really expect world days to atone for that. For instance, while the world celebrates the environment day, natural ecosystems as diverse as Amazonian rainforests, African Savannah, Indian mangroves and Himalayan wildernesses are either disappearing or being so badly mauled that in most cases restitution would be all but impossible. The Arctic ice is melting, so is the permafrost in Siberia. Deep into the season of global warming, with the world’s climate systems gone just haywire, sea levels rising, big bad storms perpetually lashing coasts and sometimes the country inland, cloud bursts and unseasonal heavy rains coupled with droughts continuing not for days but years, just last month more than 130 people were killed in a deadly never-seen-before sand-storm that raged across UP, Rajasthan, Haryana, Uttarakhand for weeks. Even while this article is being written, the Meteorological Department has predicted fresh bouts of sand storm over the rest of this week. However, in the middle of everything, the world is making merry over environment. 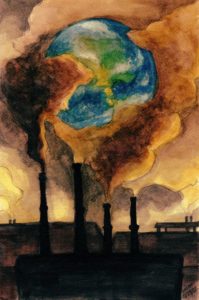 But who or what is the world, precisely? The world has grown at an alarming rate, we are told, hence the environmental crisis — you cannot separate the growth imperative from the environmental one. Which takes precedence? Environment or growth? Environment or business, which is synonymous with growth? Can the world be expected to sacrifice growth in the name of environment? Everyone by now knows that unrestricted extraction and burning of fossil fuels has led to unsustainable deposits of carbon dioxide and other greenhouse gases in the atmosphere, leading in turn to global warming. Does it matter? Does it, much? So much that we need to phase out the use of fossil fuels altogether? So much that we revisit the very notions of growth?

Once again, we learn that the world is giving it a serious thought. Yes indeed. Who could doubt that the world, as a unified, single, cohesive entity, is taking environmental issues seriously, after all those international conventions, summits, frameworks, protocols, accords and would-be accords? Every year, governments of the world meet and strategize and policymake — to wit, the annual CoPs (Conference of Interested Parties, under the United Nations Framework Convention on Climate Change).

Close to three long decades have passed since that historic first summit on environment in 1992 in Brazil’s Rio, more than two since the Kyoto protocol of 1997 that for the first time prescribed a worldwide cut in the emissions. The ‘world’ kept talking of sustainability, balanced growth and win-wins. Beyond making a lot of inarticulate, heavily jargonized noise and coming up of ingenious market fixes such as carbon trading, no headway could be made, though, in actually reducing greenhouse gas emissions, moving away from the carbon centric models of economic growth.

Nothing much could be done because the world is not really a single world. It never was. Despite UN and the intergovernmental big shows, the world never behaved as a species. It was not the species per se that logged the primeval forests, dug up the Earth for coal and oil and gold, colonized the continents and polluted the soil, rivers and the seas. In the name of growth and spreading civilization, militarily powerful profiteers had wantonly and playfully destroyed the environmental fabric of the planet. It was a process historically overseen by the western states and capitalists. The world as one human world is and has always been a construct of capital, which also sought to homogenise the environment through extraction, rent-fixing and plunder. 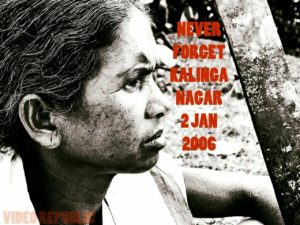 Environmental crisis such as rampant pollution and global warming are therefore not anthropogenic, or, species crisis, though the species as a species is affected by those. Well, not always, and not equally. While global warming affects the human and non-human species generically, some human communities are more affected than others. For instance, natural disasters resulting from extreme weather events such as cyclones, cloud bursts and chronic droughts affect the poor more, leading often to mass displacement and casualties. While air pollution affects rich as well as poor, the latter suffers more because of unequal access to healthcare or air-purifying technologies. Even within the ambit of one UN world, some countries are more vulnerable to environmental problems than others – the impact of rising seas would be more in countries like Bangladesh and Maldives, for instance, if compared to, say, US.

Ironically enough, in UN climate and other negotiations, this disparity among nations is consistently being interpreted in solely economic terms. If your GDP is on the lower side in the global index, you have a ‘right’ to demand growth and development, in other words, to be at par with the ‘developed’ countries. In the warped discourse of international climate negotiations, the right to develop and grow translates into right to burn more fossil fuels, to emit. Emission is an indicator of growth, and because one can’t deny a poor country it’s right to grow, and also because rich countries can’t be expected to be poor, emissions continue to spiral, inexorably. 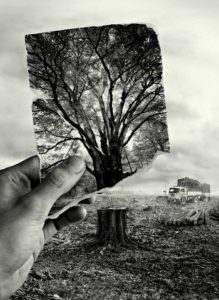 This leads to an impasse with no easy way out. Meanwhile the crisis strikes with unforgiving ferocity, sparing neither the rich nor the poor, and the world leaders and their global business allies need to keep up the show. Because growth is sacrosanct, you start discussing ways and means of making it an environment-friendly, sustainable, green growth. Because no growth is possible without profit, you think of innovative ways of ‘green’ profit-making. You turn the crisis on its head, and make it yet another market: of green energy such as large hydro power, biomass, wind, solar and of course, nuclear; carbon-efficient boilers and super-thermals; plantations of carbon-eating fast growing trees; carbon and biodiversity offsets. If X grows with Y amount of emissions, then A grows with B amount of the same. You value both Y and B, X pays A the cost of opting for a low emission trajectory, thus neutralising or ‘offsetting’ its own emissions. In the end, both A and X win, you have growth and environment both, and no net increase in emissions. Following the same logic, you destroy a forest and pay for raising plantations elsewhere to compensate for it, wipe of precious biodiversity and entire ecosystems, and pay for conserving another ecosystem somewhere. Pollution, deforestation and extinction of species on a large scale are thus turned into business opportunities and commodities in the new ‘environmental’ marketplace. It matters little that the new environmental business and green growth hurt both human and non-human communities pretty much in the same way the older, not-so-green varieties have done all these years. Pollution continues unabated, moreover, people’s access to resources they depend upon is curtailed as a direct result of green projects: dams submerge forests, villages and farmlands, wind power projects encroach upon village commons, adivasis are banished from new conserved areas.

Instead of scripting win-wins, the new green businesses only deepen the overall environmental loss and aggravate the state of crisis. They also help perpetuate the unpardonable and dangerous myth that environment is not physical or natural but economic, which can be fixed or managed economically.

Let’s come back to June 5, world environment day. India has earned a lot of praise from the UN this year for its stellar performance in combating pollution, particularly plastic. It’s not even two weeks since the Tuticorin massacre, barely a month since the killings in Gadchiroli. India’s ministry of environment, forests and climate change has sanctioned destruction of thousands of hectares of forests in the interests of growth in 2017 alone. In the four years of NDA rule, the entire regulatory framework for pollution control and environmental compliance has been systematically taken apart, in the name of ease of business. An example of this is how the Finance Act 2017 has, in an insidious way, crippled the National Green Tribunal by making way for an executive takeover of a judicial body, by relaxing the legal qualifications that were hitherto necessary for the members. The NGT benches at Pune, Bhopal, Chennai and Kolkata have been shut for months now, because of shortage of judges! 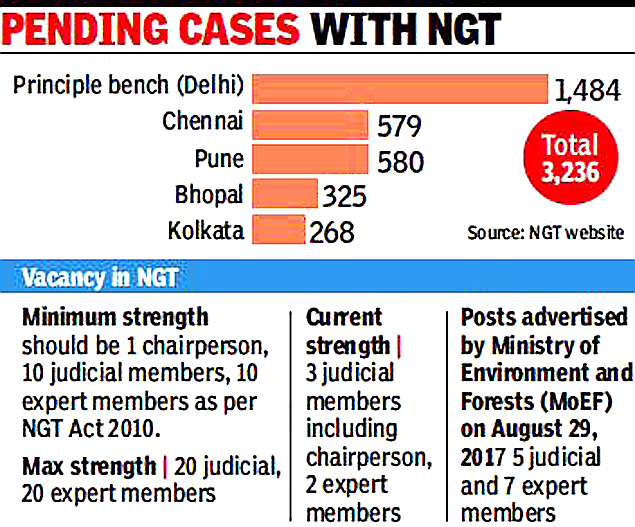 None of this matters really. Choose small doables, practical things you can achieve. Be aware. Believe in the state which always takes good care of you and you and you, too, and is on the right low-carbon pathway to growth. It believes in UN. UN believes in it. June 5 is here. Let’s assemble, roll the drums, beat pollution hollow. Here’s to the Environment, babes. Oh yeah. Oh yeah.

Soumitra Ghosh (soumitrag@gmail.com) is a social activist and researcher working with the forest communities in Sub-Himalayan West Bengal.