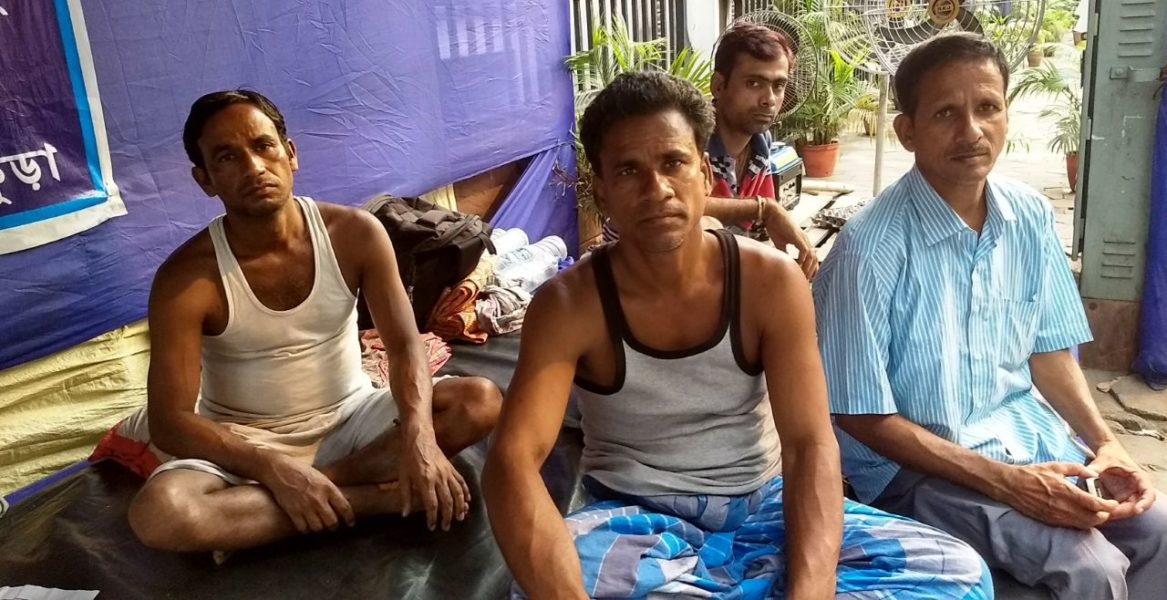 34 Anandabazar employees laid off and protesting for a month, no media coverage

A group of ABP employees of the Barjora unit of ABP in Bankura district, whose services have been terminated, have parked themselves beside the ABP Kolkata office for almost a month now. Despite, or perhaps on account of being part of the media establishment, their protests have gone totally unreported. Twenty-two of them were hired for “housekeeping” by one contractor, but also helped with the machines for printing. Of the other 12 hired by a different contractor, 3 were forklift operators, 3 supervisors, and 6 worked with printing.

Maharam Shaikh, General Secretary of the ABP Pvt Ltd Contractor Sramik Union, and one of the terminated workers, said the story began with them not being paid minimum wages in 2016. They approached the Labour Commissioner after their employer did not resolve the matter. They were informed that their complaint could only be accepted if they approached the commissioner as a union. Mr. Shaikh narrated how that led to 44 workers forming a union, with no affiliation to begin with. Later they would affiliate with the TMC. When the union was formed, 12 of them were employed by ABM traders, who ABP had contracted the work to. The rest were employees of Zed Facilities Services. Shortly after forming the union, 34 of them were fired without notice. The contract with Zed Facilities was terminated in October, though it was to have held till December. Then after two months 12 others employed by ABM lost their jobs. Many of them had been working for up to 14 years for ABP at that plant, though contractors had changed over this time, we heard from different workers. Nirmal Ghosh, amongst the 12 terminated employees of ABM traders, said that ABM’s contract had been renewed, but on the condition that all the unionised workers would be fired. Zed Facilities had been replaced by G4S, which too has hired new workers. We further learnt from them that ABP denies that they were employees, a claim the workers rejected, sharing photos of payslips and identity cards. 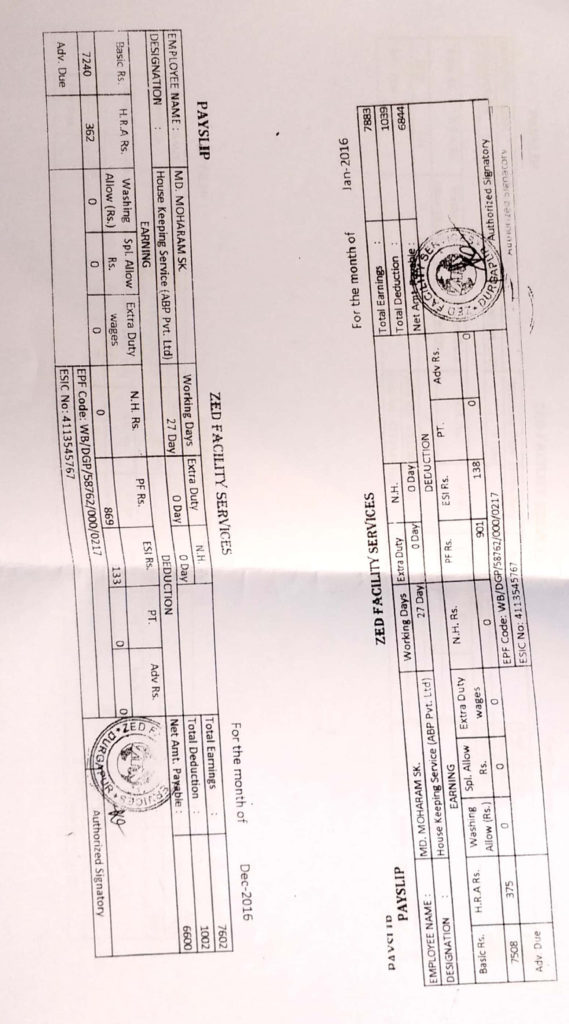 Maharam Sheikh was an employee of Zed Facility Services. 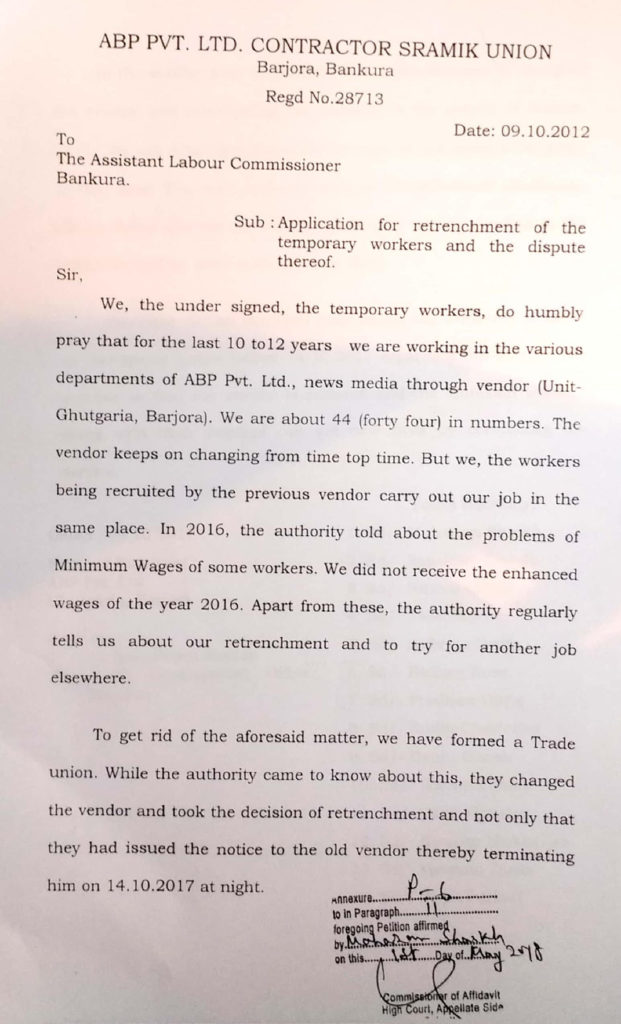 Petition by ABP Pvt. Ltd. Contractor Sramik Union workers to the Labour Commissioner, asking to be reinstated in their jobs (9 October 2012) – page 1. 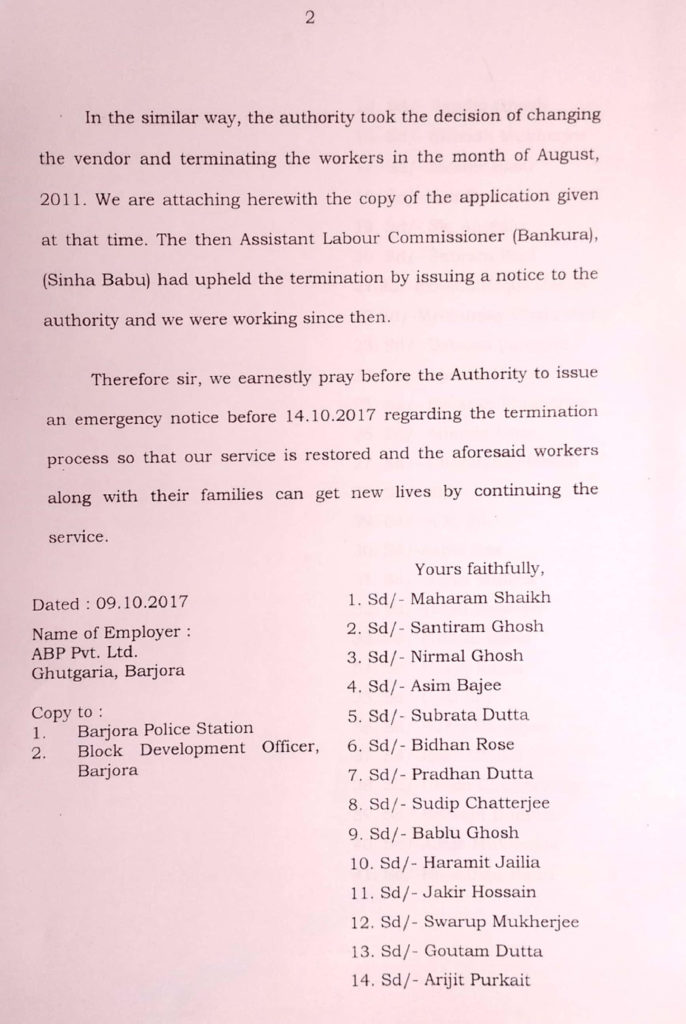 Petition by ABP Pvt. Ltd. Contractor Sramik Union workers to the Labour Commissioner, asking to be reinstated in their jobs (9 October 2012) – page 2. 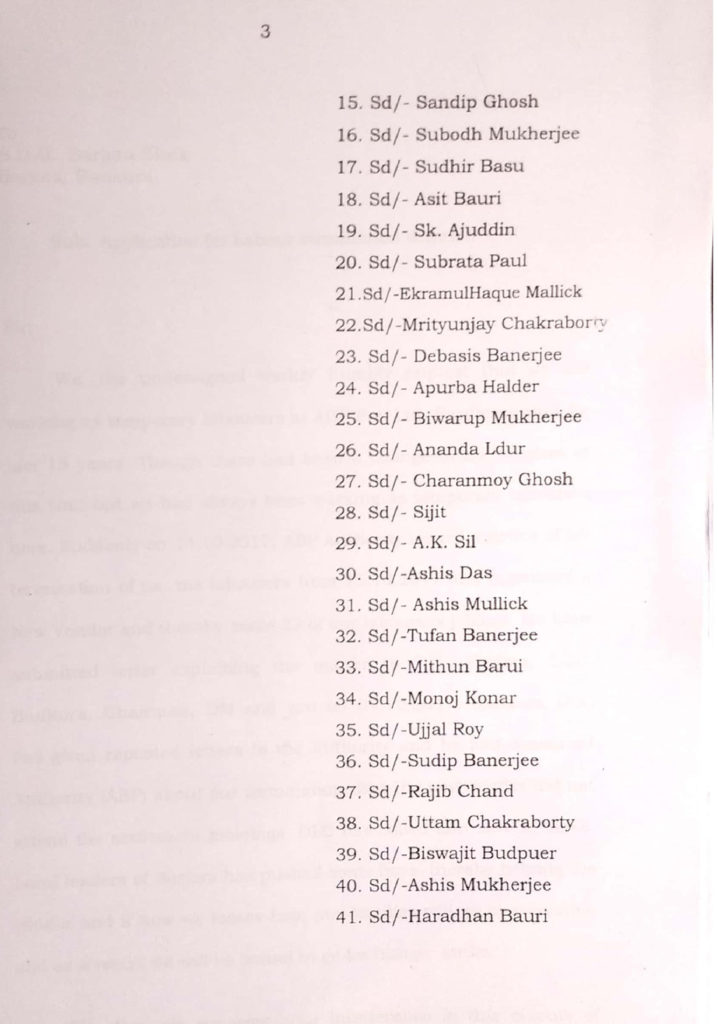 Petition by ABP Pvt. Ltd. Contractor Sramik Union workers to the Labour Commissioner, asking to be reinstated in their jobs (9 October 2012) – page 3. 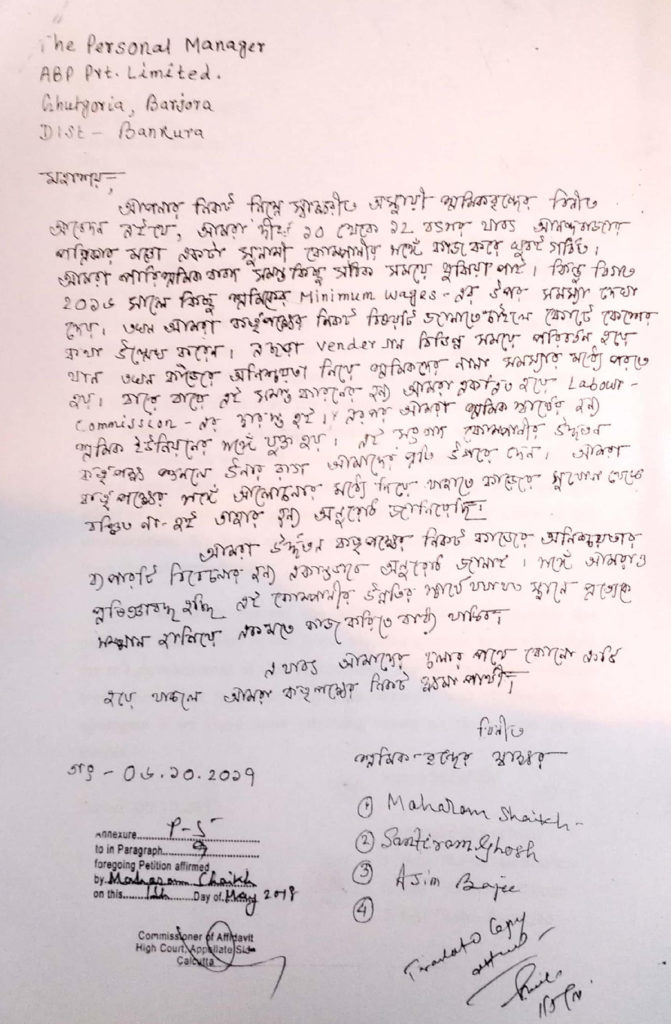 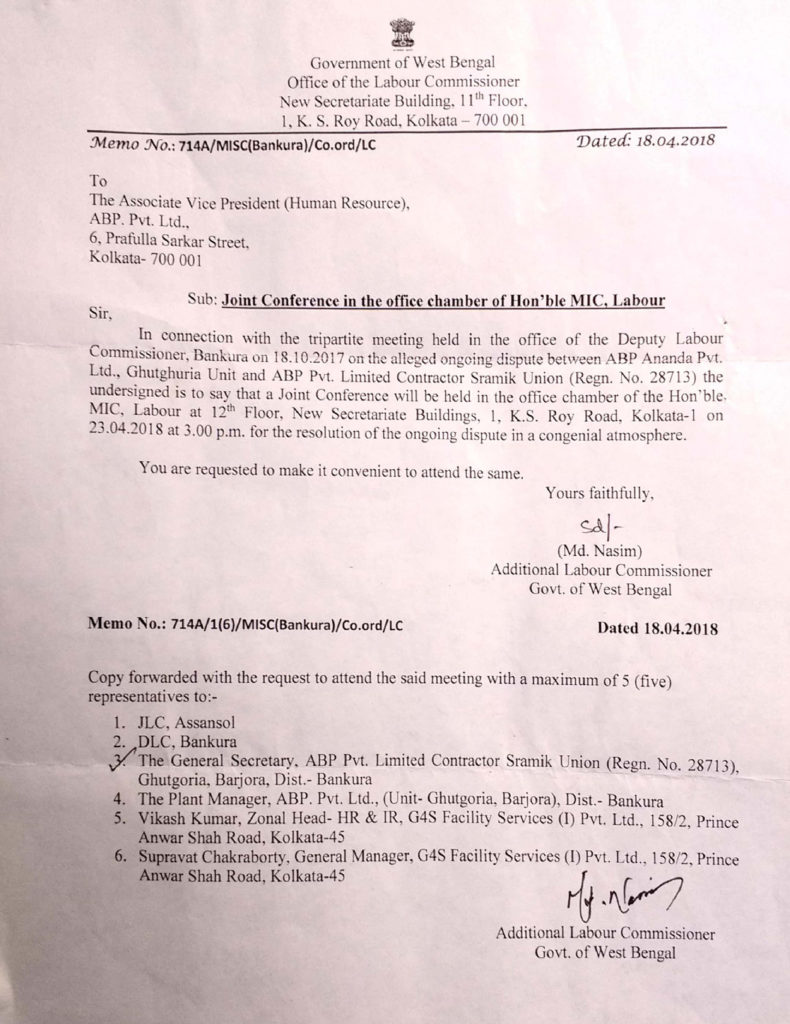 It appeared clear from talking to different workers that their services were terminated on account of them forming a union, highlighting the precarity of contract labour employed in permanent positions in different industries. Their unionisation led to minimum wages being paid at the Barjora unit from 2017, but the 2016 deficit was never paid back. And now their jobs are gone. These 34 employees are now literally on the streets, in an alien city, sitting in a makeshift stage on the pavement beside the imposing ABP office. We were told that they approached different media outlets, but received no coverage. They are exploring legal avenues, but the ABP administration continues to show no inclination to meet them. 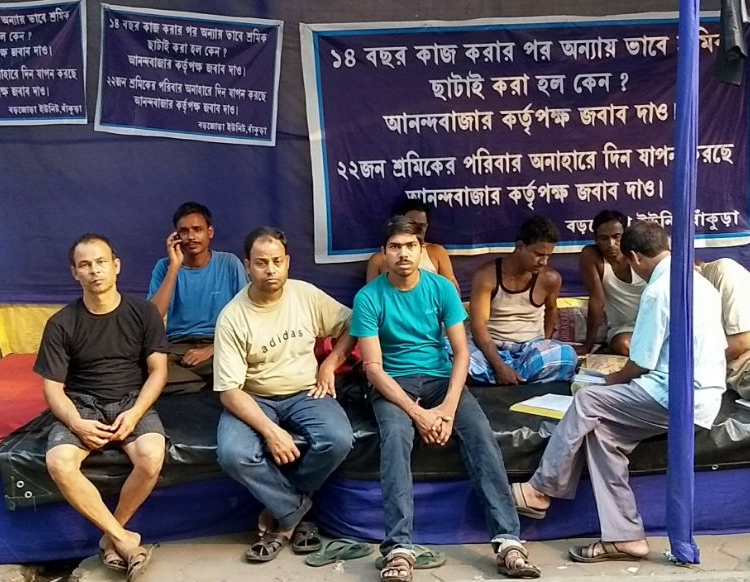 Moloy Ghatak, West Bengal Labour Minister, met them and spoke supportively, we learnt. The terminated workers had three rounds of meetings with him and his associates. However it wasn’t clear to us what that support had materially yielded. Aside from not evicting them from their protest site as yet, after so many days, not much appears to have happened. Further, given that the ABP management hasn’t budged and is even refusing to meet the workers, the Labour Minister has advised they take legal steps.

The terminated employees remain affiliated with the ruling dispensation, and haven’t reached out to other workers’ organisations yet. In the meantime, as these political and legal processes play out, the workers remain without a job. They are demanding that they be reinstated, and their overdue bonuses be paid to them. The management’s determination to convey the message that no protest and demands will be entertained, is matched by a determined group of workers who have been protesting on their own initiative. The silence of the media reflects the impunity the management enjoys. The silence also speaks loudly of the irony that mainstream media does not find it necessary to report on the issues faced by it’s own workforce, and of the unsaid nexus between the multitude of media houses when it comes to covering up the undemocratic acts of one of “their own”.