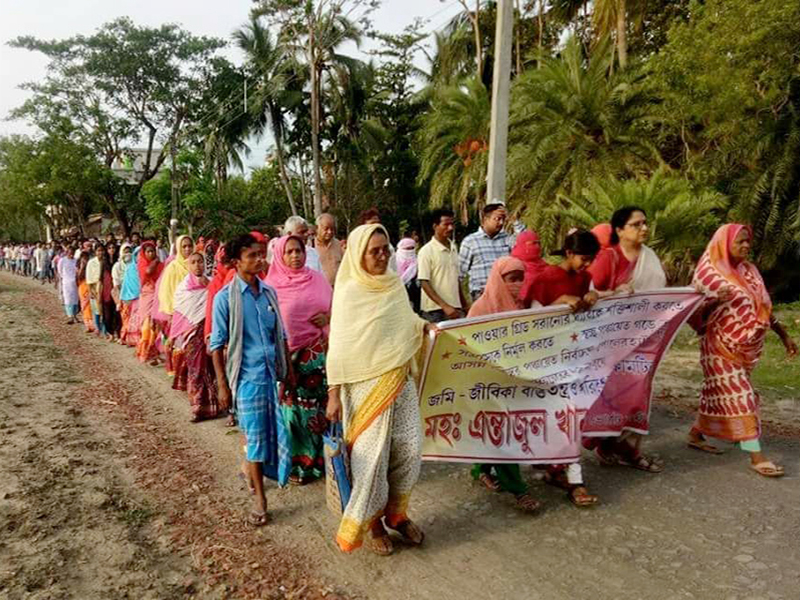 These were the only candidates, on behalf of the Committee for Protection of Land Livelihood Environment and Ecology, who contested against TMC in the entire block. Most of them were farmers and daily wage labourers, contesting elections for the first time. No other opposition party was able to put up a single candidate against TMC in Bhangor.

GroundXero: The result for three-tiered Panchayat polls in west Bengal are out. The ruling Trinamool Congress (TMC) has once again bulldozed and trounced the opposition by overwhelming wins across the state and established its absolutism across rural Bengal. The chief minister’s call for opposition-free Panchayats has worked out, although it cost over 25 (according to some estimates) deaths in bloody clashes in election-related violence on the polling day alone. Perhaps the only black spot in this massive victory is ‘Bhangor’, where five candidates belonging to the Committee for Protection of Land Livelihood Environment and Ecology (CPLLEE), braving intense violence and murderous attacks on its supporters, won 5 out of the 8 seats where they were finally able to contest. The spectacular victory of protesting villagers in Bhangor symbolizes the moral victory of one of those rare people’s movements in Bengal today, that are resisting the otherwise unchallenged rule of Mamata. 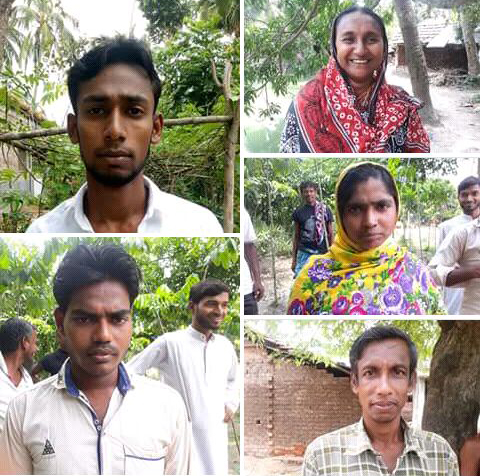 The entire opposition raised widespread allegations of violence and intimidation throughout the state by the ruling TMC. Violence started from the day of filing of nomination papers. The ruling TMC cadres and local leaders forcefully prevented the opposition party candidates from filing nomination papers. The candidates who dared to go to the BDO office to file their nomination papers were intimidated, physically and verbally abused, their papers were torn away. Even women candidates were not spared. The degree of fear and terror was was such that TMC won a record 35 percent of the total Gram Panchayat seats uncontested. That is, there was not a single opposition candidate in those huge number of seats. Violence was more brutal and intense wherever TMC faced local resistance and where the opposition tried to put up candidates.

One such place where the ruling party faced stiff resistance was Bhangor, in South 24 Pargana district, about 30 km from Kolkata. Bhangor assembly constituency comprises of two blocks Bhangor I and Bhangor II. There are 10 Gram Panchayats in Bhangor 2 Panchayat Samiti. Out of these ten, elections were held only in Polerhat II Gram Panchayat. Here the CPLLEE, spearheading the anti-power Grid protest movement for the past two years, was able to file nominations for 8 seats out of total 16. These were the only candidates contesting against TMC in the entire block. Most of them were farmers and daily wage labourers, contesting elections for the first time. No other opposition party was able to put up a single candidate against the ruling TMC in Bhangor.

CPLLEE, comprising of nearly 16 villages in the Bhangor block, is vehemently opposing the construction of power substation and erection of towers on their lands. The principal reason behind this strong opposition is that fact that the land for this project was forcibly acquired by TMC strongman Arabul Islam from the villagers. These original land-owners feared that the maze of 4 lakh volt high-tension wires in close proximity to their dwellings, crisscrossing over their fertile lands, fish-ponds, brick kilns will adversely affect the environment and ecology of their area, putting their health and livelihood in jeopardy. In spite of repeated pleas and deputations, none from the administration or Power Grid Corporation came forward to address the villagers’ apprehensions and doubts. No public hearing for the project was ever conducted. Instead the villagers, who raised questions, were threatened, beaten up by Arabul’s henchmen.

The candidates who dared to go to the BDO office to file their nomination papers were intimidated, physically and verbally abused, their papers were torn away. Even women candidates were not spared.

It was under such circumstances that the villagers in and around the power grid substation formed the CPLLEE with the help of certain leftist activists, who supported their demands. The shifting of the power grid substation, dismantling the towers carrying high voltage electricity wires, and state terror inflicted by TMC: these were some of the principal issues at the Panchayat election in Bhangor. The committee has virtually turned the Panchayat elections into a referendum to show the massive spontaneous support of villagers to its demands, and has responded to all the critique against the movement posed by the government and the mainstream media narrative, which has all along dubbed the protests as anti-development as well as sponsored and fueled by ‘outsiders’ belonging to extreme left groups. The chief Minister herself has on many occasions said that the villagers in Bhangor are being misled by the Maoists and justified the horrifying violence and terror unleashed on the protesters by her own administration and party. Last year, during a massive demonstration, bullets were fired allegedly by TMC goons, in which two young villagers Alamgir and Mofizul were killed. The martyrdom of these two young villagers, along with arrest of activists leading the movement, instead of crushing the spirit of the villagers, further ignited their protest, and virtually turned many villages like Machibhanga, Khamarait, Tona, Oriyapara into a No Entry Zone for Trinamul leaders and the police. Under intense pressure, Mamata Banerjee announced, ‘‘If people don’t want, then there will be no power grid.’’

The villagers’ committee tried several times to hold a ‘public vote’ in the affected area to prove that people ‘don’t want the power grid’, but were denied permission by the local administration, while armed attacks on the villages by Arabul Islam continued unabated. Meanwhile, the committee started a signature campaign among the villagers and submitted to the state administration a copy of their memorandum signed by as many as 25000 villagers, asking for removal of the power grid substation from Bhangor. But the ruling government paid no heed to people’s opinion, and instead, arrested Bhangor Solidarity Committee members from Kolkata, under the draconian UAPA Act.

The villagers in Bhangor decided to contest the Panchayat vote to show their support and establish people’s power in the region. During the course of the movement, they were continually harassed and denied basic civic rights like birth and death certificates, address proofs for seeking jobs etc. by the ruling party Panchayat members.

Violence in Bhangor started more ferociously once the nomination date for Panchayat Elections were announced. Arabul, TMC leader and ex-MLA and strongman, was determined to prevent the villagers from contesting the polls. On the first day of submitting nomination papers, the candidates were beaten up, their identity cards and other papers snatched and torn away by armed goons stationed inside the BDO office. The police arrested the activists who went to lodge complaint against this and they are still in Alipur Jail with numerous non-bailable false cases imposed on them. The same thing was repeated even after the High Court directed the State election commission to accept their nomination papers. Candidates belonging to the committee were physically assaulted by hundreds of paid goons, this time inside the DM’s office in the middle of Kolkata. A photo journalist trying to record TMC’s hooliganism was kidnapped and stripped to his inner-wears. At last, in an unprecedented move, the Kolkata High Court directed the Election Commission to accept the nomination papers of eight candidates, who were able to submit their papers through WhatsApp. Arabul and his men continued their attacks. Houses were burnt, candidates’ relatives were kidnapped, bombs hurled and bullets fired on the villages every night in order to terrorize and intimidate.

The most deadly attack came two days prior to the polls. A campaign rally of villagers in support of their candidates was attacked with bombs and bullets. Hafizul, a young supporter of the movement, was shot with a bullet and killed. The video of this incident went viral and the chief minister hurriedly asked the Police to arrest Arabul who led the attack.

Will Mamata Banerjee, who rode to power on the back of martyrs of Nandigram and Singur, gracefully accept the verdict given by the people of Bhangor? Will she rise above her ego and arrogance and sit with the CPLLEE and find a solution to this problem?

Even with Arabul in police custody, violence continued on the day of polling. The villagers fought back to protect the booths and ensure that they are able to cast their votes. But with the police openly siding with Arabul’s henchmen, they could not guard all the polling booths. The Committee alleged that polling booths in three seats, from where Arabul himself and his son were contesting, were captured by armed goons, and no villager was allowed to cast their votes.

In spite of such massive violence and brutal party-police nexus, the villagers won 5 out of the 8 seats. It shows once again that the level of spontaneous people’s support behind the committee’s demands. As Sharmistha Choudhury, one of the organizers of the movement, told us over telephone, ‘‘This victory is an absolute mandate against the power grid project in the region. This victory above all, shows the magnificence of people’s power allied against all ruling class parties, and is a beacon of hope in these dark times, when political polarization is apparently between the far right and the far, far right.’’

Bhangor has given a clear verdict, a big ‘no’ to the power grid project, to the neoliberal development imposed on the people from above. Bhangor cannot betray its young martyrs. Will Mamata Banerjee, who rode to power on the back of martyrs of Nandigram and Singur, gracefully accept the verdict given by the people of Bhangor? Will she rise above her ego and arrogance and sit with the CPLLEE and find a solution to this problem? Her statements after the poll results pour cold water over all such hopes. Rulers seldom learns from history. Mamata is no exception to this.