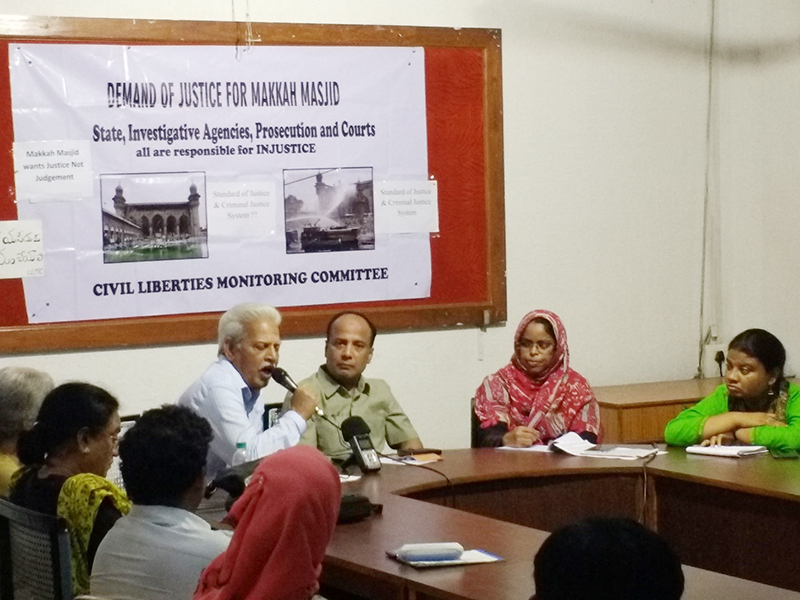 The Mecca Masjid Blast, Its Victims, Their Stories and Struggles

In a roundtable discussion organised by Civil Liberties Monitoring Committee on 5th May, several speakers raised the matter of suffering of innocent Muslim youth, alongside the impunity of a self-confessed Hindu terrorist, in the context of the arrests on fake charges that followed the blast at Mecca Masjid in Hyderabad.

GroundXero: Dr. Ibrahim Junaid was a student of yunani medicine, when the blast at Mecca Masjid in Hyderabad left nine dead and sixty injured. He was among those arrested and tortured by the police, before being acquitted and provided with “character certificates” and financial compensation by the state government. Even after it had become evident, however, that he wasn’t behind the blasts, his troubles on account of the allegations didn’t cease. Speaking at a roundtable discussion organised by the Civil Liberties Monitoring Committee (CLMC) at the Sundarayya Vignan Kendram in Hyderabad this 5th May, he narrated how his family was socially isolated after the allegations. After being released from prison he resumed his studies, but the police required him to spend the better part of two days every week at the police station to give haziri, and then they would also land up at the university. He was asked to leave by the administration, and it was only by shuffling across institutions that he somehow managed to finish his degree. The pattern repeated itself at subsequent workplaces, and he now has a private practice.

Abdul Rahim ran a small store, and became another victim of the wave of arrests of Muslim youth by the police after the blast. Speaking at the same venue, he narrated how from the questions during interrogation, he felt that even the police knew that no Muslim could have a hand in the blasts that rocked the historic mosque in Hyderabad. The police were mostly concerned with making derogatory comments about Islam and Muslims, rather than extracting any specific information, he said.

As opposed to the many Muslim youth who suffered from being targeted by the police, Naba Kumar Sarkar (better known as Swami Aseemanand) confessed in an extended interview to Caravan to planning the blast, wrote a 42 page confession statement to a magistrate, got charged with being the kingpin behind the blasts, and still managed to get acquitted. He later retracted his confession. Several factors have raised doubts about the prosecution: the prosecution lawyer in the case was an ex-ABVP member, and reportedly continues to donate to them; the case was built on the confession and witness statements, without collecting further evidence to support them; and the judge resigned hours after delivering the verdict. Aseemanand is also accused in the blasts in the Samjhauata Express (2007), Ajmer Sharif (2007), and Malegaon (2006), but is now roaming free. Far from distancing themselves from him, the West Bengal state president of BJP at one point stated that he would be brought to his native West Bengal for campaigning in the panchayat elections. Aseemanand is reportedly a resident of Kamarpukur, in Hooghly, and his brother Sushanta Sarkar is the BJP district secretary.

The suffering of innocent Muslim youth, alongside the impunity of a self-confessed Hindu terrorist, was a matter raised by several speakers at the roundtable discussion organised by CLMC. Advocate Mohammad Ismail of the Civil Liberties Committee (CLC) spoke of the disregarding of Aseemanand’s judicial confession (i.e. made to a magistrate in court, and not in police custody) as a grave matter. Anuradha Sharma spoke of her experiences of being in jail for four years in Chattisgarh on charges of being a Maoist. CLMC General Secretary Lateef Mohammad Khan, relating these incidents to the case of a 90% physically impaired professor in custody for alleged Maoist activity, argued that there clearly was no such thing such as democracy or secularism existent in India. Different speakers emphasized the importance of their continual and painstaking work as civil liberties activists in exploring the legal avenues available, but emphasized the need to build broader campaigns for these efforts to have any success. Dr. Lubna Sarwath, General Secretary of the Socialist Party of India, spoke of the need for leaving the room with an action-plan for next steps.

Telugu poet and member of VIRASAM (Revolutionary Writers Association) Varavara Rao touched upon another familiar theme in the discussions, about the media’s role in reporting such incidents. He argued that this whole incident was orchestrated to distract media attention from the Sohrabuddin case, where BJP General Secretary Amit Shah is among the accused. Advocate Nikhat Fatima from CLMC raised a concern shared by many, as she asked about a particular media channel being already present at the site of the blast on the day, providing life telecast of the police firing that followed, and raised questions about how they could have known to be there then. Khan Yasani, a journalist in attendance, argued that the red (left), blue (Dalit) and green (Muslim) forces need to come together.

Another common point of reference were the recent protests in Aligarh Muslim University, where students had been attacked by Hindutva elements, and where an attempt to isolate and destroy the university is underway. Sandhya, of the Progressive Organisation of Women (POW), speaking of AMU, related it to Hindu claims on public spaces, and atrocities against women.

The Civil Liberties Monitoring Committee has been active since the early part of this century, and actively worked around the Mecca Masjid cases. According to their website, their founding moment can be dated to the Gujarat riots:

In the wake of the 2002 Gujarat carnage, the Gujarat police alleged terror links between men detained under POTA in Gujarat and covert terrorists in Hyderabad. The police in both States joined hands to detain Muslim youth from Andhra Pradesh. Lateef felt that many civil liberties organisations were hesitant to take up strongly the cause of these Muslim youth, because of allegations of their links with Pakistan’s ISI. He therefore established a fraternal civil liberties organisation, calling it the Civil Liberties Monitoring Committee, focused specifically on the injustices faced by Muslims.

After the Mecca Masjid blasts they worked with different organisations to fight for justice for those falsely accused. In that vein, among other speakers, Prof Rama Melkote spoke at the event with reference to the Hyderabad Forum for Justice she had helped form then.

This meeting on 5th May too featured an attempt to work with different organisations and individuals to respond to Assemanand’s acquittal. Kaneez Fatima, Joint-Secretary of CLMC, introduced the event, co-chaired it, and responded to most of the speakers with her thoughts about what could be done in light of the speaker’s comments. Aside from the organisations mentioned, the meeting included representatives from the Indian Association of People’s Lawyers and the Praja Party. The roundtable led to proactively building a conversation between different speakers. There were recurrent themes as people heard and spoke with each other. The meeting also featured an alleged member of the intelligence, who did not leave on being asked to, despite it being an invite-only event.

Shortly after the verdict acquitting Aseemanand, CLMC organised a press conference, and released a statement dated 21st April, where they wrote, borrowing the words from a resident of the Muhajirin camp, a well-known basti near the mosque, that the “Court verdict on Mecca Masjid is like another blast in Mecca Masjid.” They raised the following demands, as also articulated in a post on their website later in April:

1) We demand Government of Telangana to immediately intervene and take all possible measures to provide justice for Makkah Masjid blast victims. 2) We demand accountability from the prosecution for their total failure to ensure justice and demand an extensive and through inquiry in the manner in which a substandard and botched up prosecution was conducted in the sensitive blast case. 3) We demand the Hon’ble High Court to take suo moto cognizance of the case and order a retrial under its supervision as expeditiously as possible to restore the confidence of the public in judicial system.

They conclude the statement with an “appeal to the people of India to realize the increasing fold of Hindutva terror […] and to combat it to save the secular and democratic fabric of India.”