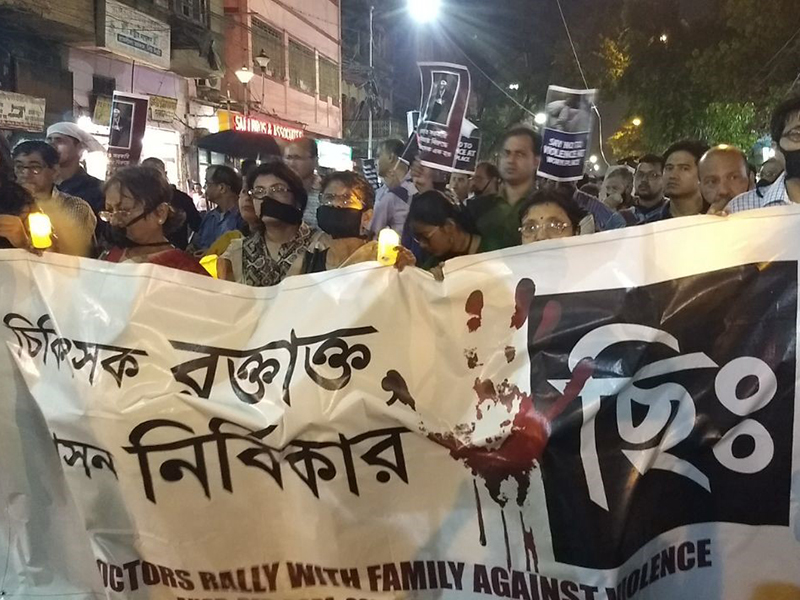 Doctors protest in Kolkata, demand more government funding in health, call for steps to curb attacks against them

GroundXero: It is an unusual sight to find doctors jostling with the police at a barricade, on a stormy evening. Yet, if anything, the protest on 11th May in Kolkata, featuring about 500 people in attendance, suggested that more was to come in the days forward. Several organisations had given the call for the rally by doctors and their families: West Bengal Doctors Forum, Shramajibi Swasthya Udyog (Workers’ Health Initiative), Association of Health Service Doctors, Doctors For Democracy, West Bengal Dental Services Association, MSC, and others – protesting the “relentless violence against healthcare professionals”. Ipsita Bhaduri, a medicine student and currently an intern, attending the protest with her mother, said, “main point was that there has been lot of violence directed against doctors for very long… There have been talks with the state government, but there has been no outcome.”

Another doctor, and member of WBDF, spoke to us about the horrible condition of healthcare in the state. There aren’t sufficient beds or medicine for patients, and patients have to approach the ruling party to access treatment.

Such a situation, he said, is creating misunderstandings between patients and doctors, and this rally aims to bridge this divide. There had been a call for a silent rally, and many of the protesters wore black face-masks. 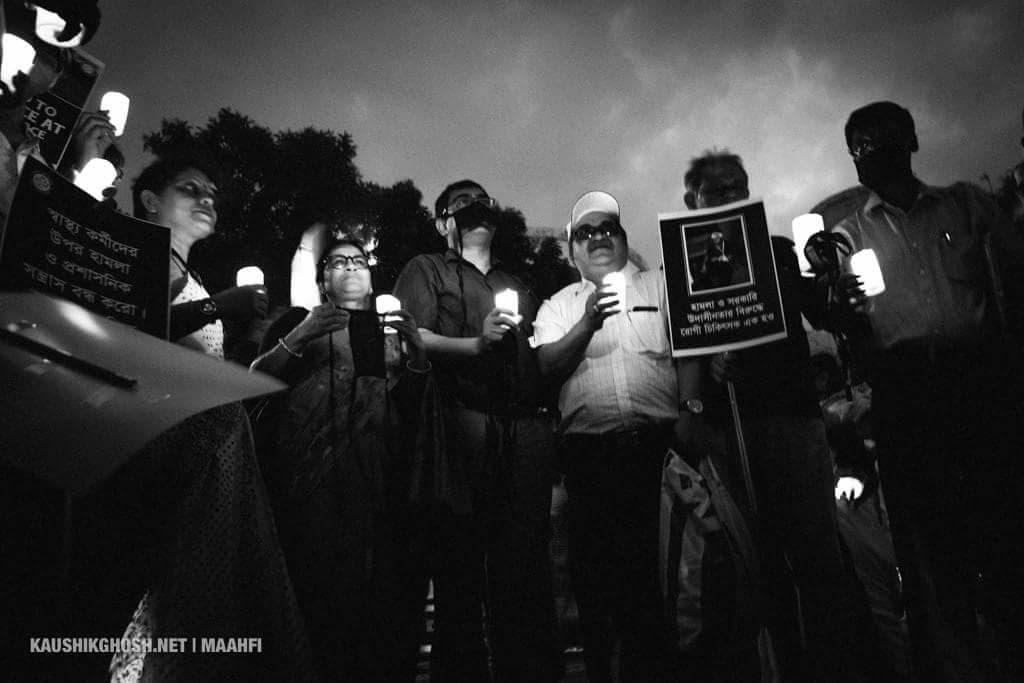 However, he said, the police undemocratically stopped the rally at Bowbazar, and prevented everyone from heading to Lalbazar. After that it became more vocal and turned back towards the Calcutta Medical College, from where it started. The police had stated that due to the upcoming panchayat elections, CrPC Section 144 had been imposed. At the meeting in the State Secretariat, Nabanna [with Chief Minister Mamata Banerjee], on 10th April, the administration had assured the doctors of better facilities, and further steps to curb the attacks against doctors. [The minutes of that meeting can be viewed here] Yet, he referred to about 12 incidents targeting doctors this past month, with one involving a leader of the ruling party, Pratul Mahato, where no action had been taken against the perpetrators till date. This is all a part of the generally undemocratic climate in the state today, and that is what this rally is against, he concluded.

Dr. T. Bhattacharya  spoke to us at length about the issues at stake, and related it to the diminishing budget for health, and corporate influence on the sector.  “Private hospitals are squeezing and cheating people, it is not about the doctors per se, and the government hospitals don’t receive any funding”, he rued. “People go to government hospitals only by compulsion,” he pointed out. Dr. Punyabrata Goon of Shramajibi Swasthya Udyog located this further in the context of  global processes, and spoke of how by working to the dictats of the World Bank and the International Monetary Fund, since the 90s the government has been de-funding public medicine. In such contexts, he said, when a patient comes and doesn’t get the treatment needed, they attack those who they find at hand – healthcare practitioners. By their organisation’s calculations, there have been about a hundred attacks on healthcare practitioners within the last year, most of these occurring in public hospitals.

Girila Sarkar, teacher in a state school, was amongst many others attending in solidarity. She too highlighted the demands for better infrastructure, and spoke of how the administration hadn’t even extended the courtesy of accepting their deputation, asking instead that they go to Alipore to submit it. Shakuntala from Sathi, a Pune-based organization that works on healthcare, argued that universal healthcare was the need of the hour – without any discrimination on caste or religious lines. “Given the way funding for health is decreasing, the way privatization is proceeding, and the way patients and their families are getting dragged down by debt, they are taking their frustration out on doctors. It is a fact that the public health scenario is becoming very bad, budget is going down sharply, and the whole of public health sector is going down the private road. When we go down that road, we will inevitably have to face such circumstances.”

Within these circumstances, there has been a gradual accumulation of resentment. Anger has been building amongst the doctors’ community for a while, and social media has also played a role. Women doctors and nurses have been attacked, and gendered narratives have been shared as testimonials or figures to mobilize an audience. On 23rd March doctors fasted in protest. 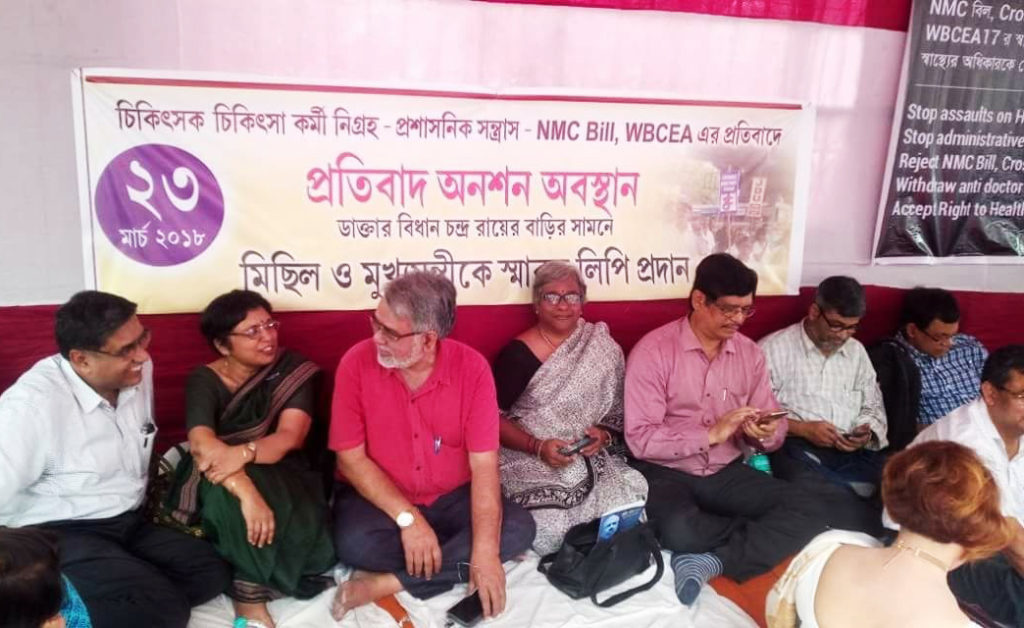 The Joint Platform of Doctors had declared a series of steps of escalation on 18th March, which included courting arrest. These steps yielded a meeting with the CM and other members of the administration on 2nd April, and this protest on 11th May marked the souring of unattained promises. More steps are sure to come!

Doctors on the streets, as a part of a planned series of escalating steps, protesting the privatization of health while demanding more public funding, alongside more security for healthcare practitioners, are a very promising exciting development. It behoves different sections of society to stand with them. However, precisely to build such a broader movement, the need of the hour is to go further, both with the constituencies mobilized and the questions raised. For one, though nurses are also victims of these attacks, their voices haven’t received much visibility through these protests. Moreover, some sharp self-criticism of doctors would help build struggles collaboratively with the patients who are victims of privatization. While it is important to locate these tensions within the logic of capital, it is also the case that individual doctors have in many cases benefited from these processes. There is need for further introspection on why doctors have come to viewed as exploiting people at their most vulnerable moments, and minting money in the process. Administrative measures such as 4,500 civic volunteers, as promised by the Chief Minister, won’t be a solution. At least 7 of the 10 points discussed with the Chief Minister (as noted in the minutes released by the Joint Forum for Doctors), pertain to security for doctors, with barely any discussion noted about concrete steps regarding privatization. Alongside protesting the violence inflicted upon them, it is vital that doctors build open and transparent conversations with other healthcare practitioners and common people, to rebuild trust and work together in building a strong movement against these trends in the health sector.