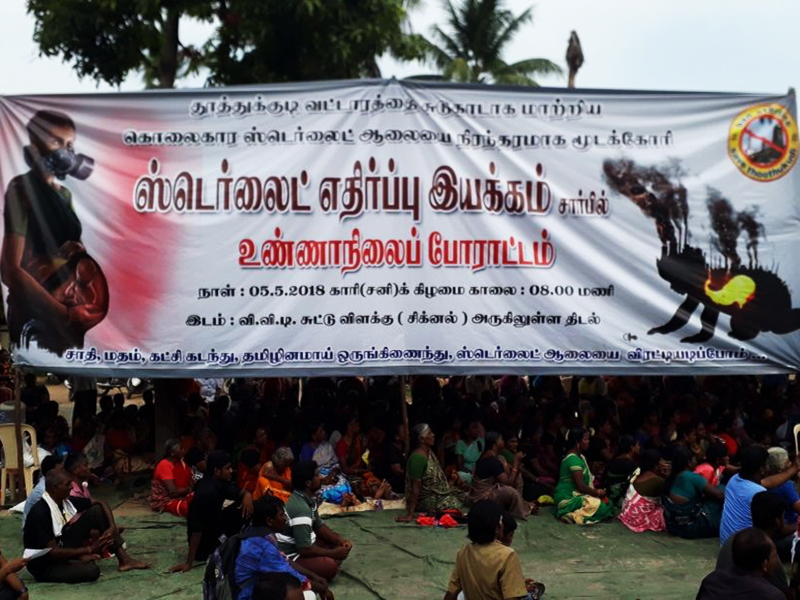 Tuticorin’s battle against destruction of environment and humankind by Vedanta Ltd. continues (Find our earlier report on the Anti-Sterlite struggle here).

Protests against Vedanta’s Sterlite Copper are continuing in Thoothukudi (also called Tuticorin) district in Southern Tamil Nadu. On Saturday, May 5th, thousands participated in a 12-hour hunger strike demanding the permanent closure of the polluting copper smelter. The hunger strike which was organised by the local Anti-Sterlite Committee, is the residents’ latest effort in their recent large scale agitation against Sterlite which have been ongoing for 85 days.

People from the Tuticorin city and several villages in the district, gathered at the VVD signal near Chidambaranagar bus stop to oppose Sterlite. Among those present were residents from the hamlets of Silverpuram, Milavittan, Kumareddiapuram, representatives of Lucia Blind School, Thoothukudi’s transgender community and actor Mansoor Ali Khan. The gathering witnessed speeches by several members of the public and energetic sloganeering led mostly by children. Many who spoke reiterated the non-violent methods that the city has undertaken in its struggle against Sterlite but expressed dismay and anger against the governments, courts and the state apparatus.

Speakers, including women who had lost their husbands to cancer, and relatives of people battling serious illnesses which they believe were caused by effluents from the plant, narrated heart-wrenching accounts of their struggles. A representative of the transgender community questioned the notion that only young parents were concerned about Sterlite because they fear for their children, and stated that trans people were concerned about the well-being of all. Songs composed in support of the movement were sung at the gathering. Actor Mansoor Ali Khan who was present with his family to express solidarity with the people, urged the people to stay united and force the factory to shut down. 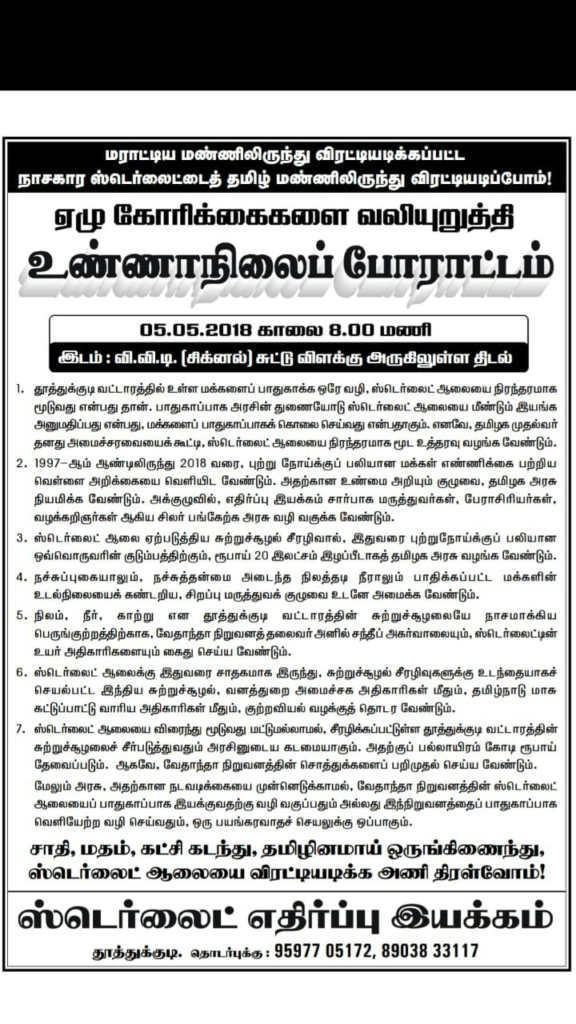 There were seven demands made by those gathered at the hunger strike protest. These included the immediate closure of the Sterlite plant, a white paper on those afflicted by cancer since 1996 (when the plant began operations) and a fact finding committee comprising of representatives from civil society, a 20-lakh compensation to every family which lost one of its members to cancer, a medical committee to study the health of people whose land and water has been polluted, arresting and prosecuting Anil Agarwal, the founding chairman of Vedanta and higher officials of Sterlite for polluting Thoothukudi district, initiating criminal proceedings against the officials of the Ministry of Environment and Forests and Climate Change and Tamil Nadu Pollution Control Board (TNPCB) for colluding with the company and funding the clean up of Thoothukudi district by seizing the properties of Vedanta Ltd.

Sterlite Copper, which has faced opposition from the locals since its inception in the mid-1990s, has recently met with mounting protests since its plan to build a second smelter were made public. The protests, which were initiated by the villagers in Kumareddiapuram in February this year, gained widespread attention after approximately 200000 people took to the streets of Thoothukudi city on March 24th. Images of the massive rally spread on social media and led to protests and shows of solidarity all over Tamil Nadu and among Tamil communities around the world. In response to the increased scrutiny, Sterlite announced a 15-day temporarily shut down of its smelting operations on March 27th by bringing forward a scheduled maintenance operation.

The anti-Sterlite protesters have been exploring new avenues to press their demands. On May 1st, four Grama Sabhas — two of which are in the Thoothukudi district, passed resolutions demanding the Sterlite Copper plant be permanently closed. The four village panchayats were Poovani, Vellur, Mapillaiyoorani and Therkuveerapandiyapuram, where Sterlite’s plant is located. Similar resolutions were moved in at least 18 other villages, with strong public support, but officials refused to comply.

On April 10th TNPCB denied Sterlite Copper’s application to renew its Consent to Operate (CTO). Thousands of people from 18 villages in Thoothukudi district marched to the offices of the TNPCB on April 23rd to submit petitions seeking the closure of the existing plant and the termination of the new plant which is under construction. In the week following the decision, details emerged on the five grounds cited by TNPCB in its order.

Sterlite had failed to conduct tests to determine groundwater quality on the borewells within and outside its complex and had not submitted analysis on the concentration of heavy metals in the ambient air. It had dumped slag along and in the Uppar river blocking its flow and had not built physical barriers between the river and the waste dumping ground. Moreover the authorisation Sterlite obtained on July 7th, 2008 to dispose hazardous waste had expired on July 9th, 2013, but the company continued to handle and dump thousands of tonnes of hazardous waste without a valid permit. It had also failed to construct a gypsum pond that it was mandated to as of March 31, 2018.

Many observed that the reasons TNPCB cited were easily rectifiable by Sterlite and the move to deny license was widely interpreted as hollow and a ploy to bide time till the protests die down.

Meanwhile more evidence which strengthens the locals’ case against Sterlite continues to emerge. A few days ago the Chennai Solidarity Group released a report which alleged that TNPCB had allowed Sterlite to operate with chimney stacks of far lower heights than legally required. Using information obtained under the RTI Act, the activists show that the height of Sterlite’s chimney has remained unchanged at 60m even though its volume of production has increased more than ten fold since 1996.

The legal minimum required height for the existing plant is 103 m. Shorter chimney stacks, which cost significantly less, do not allow the sulphur dioxide gas to disperse safely and the dangerous effluents instead settle on the densely populated town. 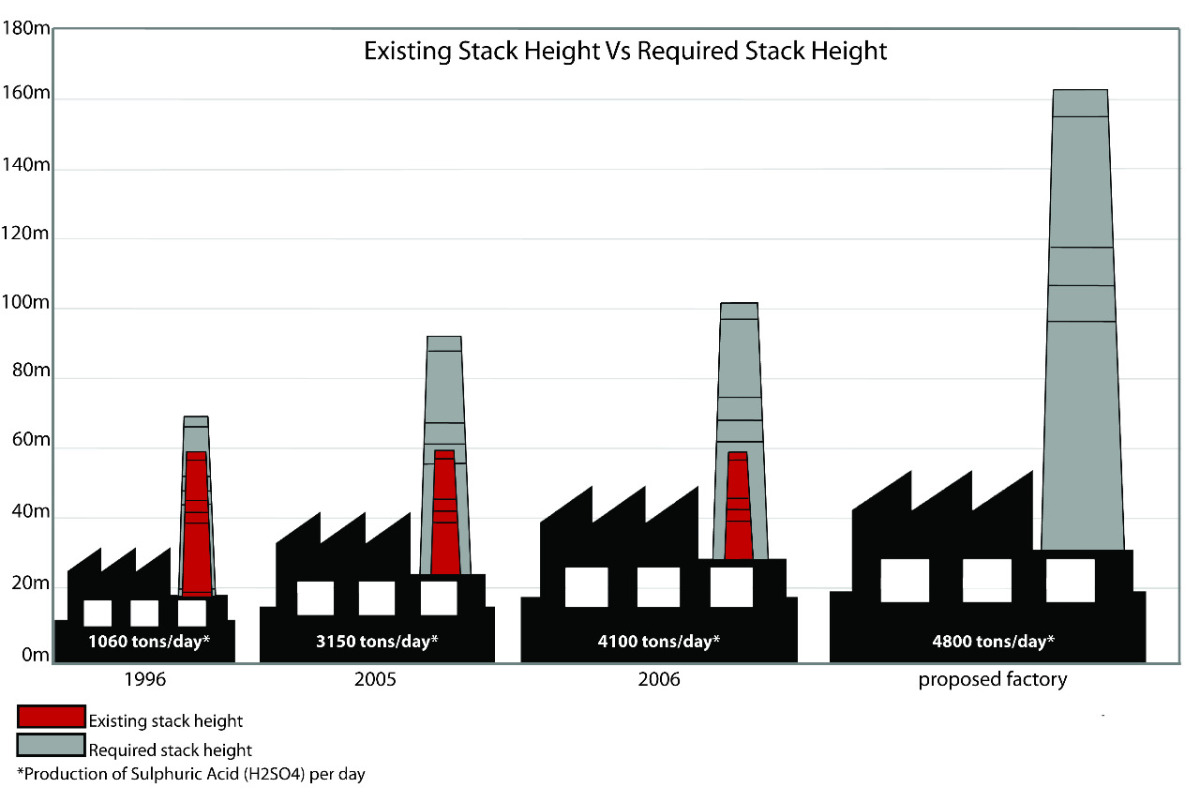 Notably this particular failure to comply with safety standards has never been pointed out by the TNPCB in the 23 years Sterlite has been in operation, including in its April 10 order denying the CTO. Thoothukudi civil society representatives have said that they intend to pursue vigilance complaints against TNPCB officials since this clearly points to collusion and possibly corruption. They also resolved to file criminal complaints against others who were assisting in harming the people of Thoothukudi.

Sterlite appealed against the decision to deny license to TNPCB’s Appellate authority. When the appeal was heard on May 4th, Sterlite claimed that four of the five grounds have been complied with and accused TNPCB of delaying Sterlite’s application to renew the authorisation to handle hazardous waste. The next hearing is scheduled to take place on May 17th.