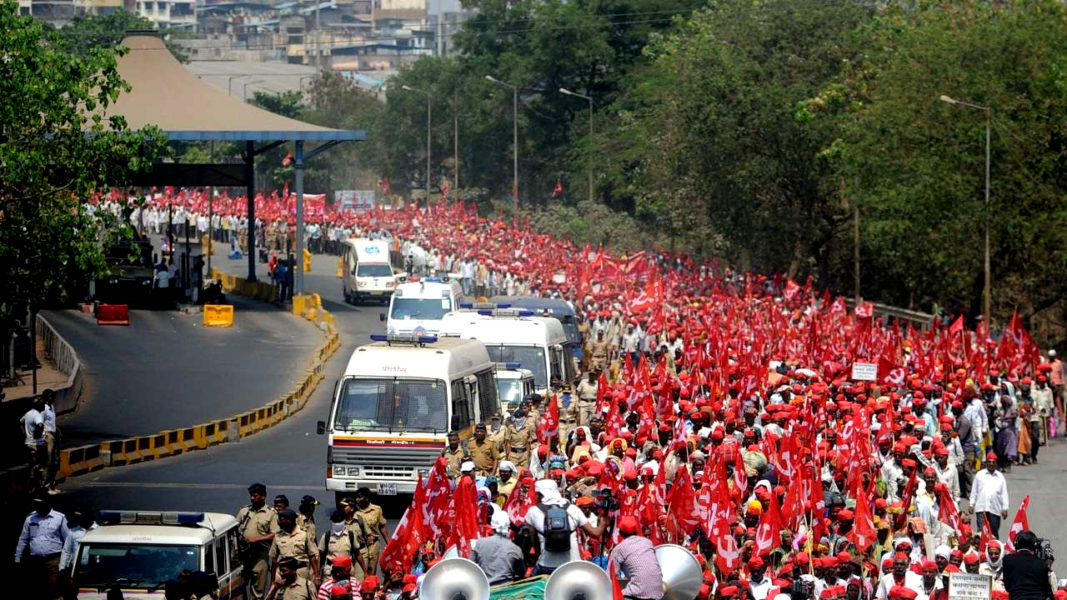 The mainstream media serve the class interests of their owners, even as they want us to believe that it is the readers’ preference they are catering to. Farmers’ marches go unnoticed whereas articles keep flowing analyzing Bollywood actor’s indictment.

In the name of popular interest that is believed to drive news content, mainstream media have developed a complicated relationship with celebrities that swings between love and hate – and both are good grist for the news mill. The powerful, the rich, famous, and beautiful people occupy a disproportionate mind-space on news media, in direct proportion to the economic resources that they have captured.

Media has no time for the less endowed farmers, the unemployed, and the urban/rural people on the margins. The state too does not want the media to include such people in the ‘India story’ it chooses to peddle. Whether it is the farmers’ distress, the travails of the unemployed, the news television channels have no time or space to spare, rendering the issues invisible on the historical canvas of the nation.

In a piece for thehoot.org that reviewed media coverage of PV Rajagopal’s march from October 2 to 11 of 2012, leading thousands of farmers, Dalits, adivasis and the landless poor from Gwalior to Delhi, I was compelled to characterise Rajagopal as Mr India – invisible. Most of the channels, including NDTV, did not see much worth in the story then. The non-violent Jan Satyagrah that Rajagopal led made the then Minister for Rural Development, Jayram Ramesh, to go to Agra to sign an agreement that set in motion the process that resulted in the historic Land Acquisition Act 2013. It ought to have been a big story on media.

While print media (Tehelka, Live Mint, The Hindu) provided more coverage, the television channels were busy discussing Narendra Modi while on Vivekananda Vikas Yatra alleging that the government has spent 1880 crore on Sonia Gandhi’s treatment, a series of rape cases and Arvind Kejriwal’s daily instalments of corruption charges. Veeraraghav of CNN IBN told us then (before Modi became Prime Minister!) that both Modi’s speech and Modi’s silence makes news. And Rajdeep Sardesai caught Modi on his Vikas Yatra to ask him if he will contest to be the next PM.

This time around, there has been a change in coverage of the farmers’ march from Nasik to Mumbai, mostly led by online media and some honourable exceptions like NDTV India among the mainstream media. There was a steady stream of photographs and updates online on the farmers’ march that explored various dimensions of agriculture policy and the distress caused by it. The leading mainstream media houses like the Times of India group still stayed away from coverage, or at the most relegated the coverage to inside pages giving minimum space to the event. Tens of thousands of farmers rallied across the state of Maharashtra for 5 days before reaching Mumbai city on 12th March to stage a mass demonstration.

Times of India is the largest selling English language newspaper in the world and in India (according to Audit Bureau of Circulation, “Submission of circulation figures for the audit period Jan – Jun 2017”). From 10th till 14th March, the front page of the Times of India Mumbai edition carried one photo of the marching farmers on 12th March, and one photo with a small blurb declaring that the Government agreed to the demands po for the farmers and the march has been called off, on 13th March. The news of a tennis player not getting a cab in Mumbai literally got more space and visibility on the ToI Mumbai front page (on 11th March) than this.

Compared to this, Salman Khan’s indictment was carried as a major news for 3 consecutive days (6th April to 8th April) on the same ToI Mumbai front-page, including a detailed description of how he is “skipping meals” in jail but is not skipping his workout sessions. 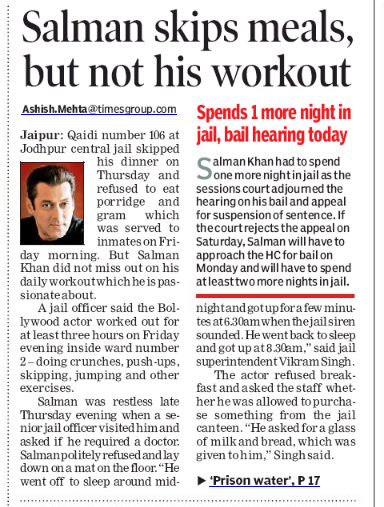 However, it is difficult to decide which is better between such non-coverage of the march and the frantic efforts of the openly pro-state television channels that were foraging for motivations and conspiracies behind the march. 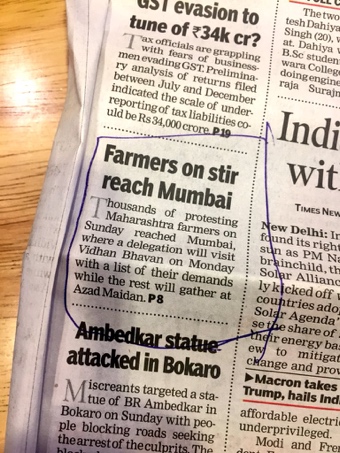 Times of India carried ONE line on page one, with follow ups on page 8 and 10.

The mainstream media, especially the English language media, claim that their readership/viewership is not interested in news of rural or urban poor in India and are mostly concerned about issues of urban aspirational classes. But the response of the civil society of Mumbai exposed the dubiousness of this argument. Doctors, individual employees, youth, and civil society organisations came out in large numbers to show solidarity and hospitality to the thousands of marchers.

The publisher and president of Washington Post, Philip L. Graham, is credited with the quote “Journalism is the first rough draft of history”. If matters that affect large sections of the population are rendered invisible in media, we are back to the medieval days when history meant the stories about kings and queens and their conquests. Now we have the shenanigans of the politicians and celebrities, or crimes and disasters affecting the ordinary people, but not much about their real lives. This is particularly true of television news, which hopefully will not be the primary source of our times for the serious historians in the future.

The mainstream media serve the class interests of their owners, even as they want us to believe that it is the readers’ preference they are catering to. When millions of people are hurting from exploitative policies, this strategy of non-coverage in media is effectively denying the suffering people their right to a place even in history. Economic marginalisation is compounded further by marginalisation in the media, finally being rendered invisible in the history of the times. 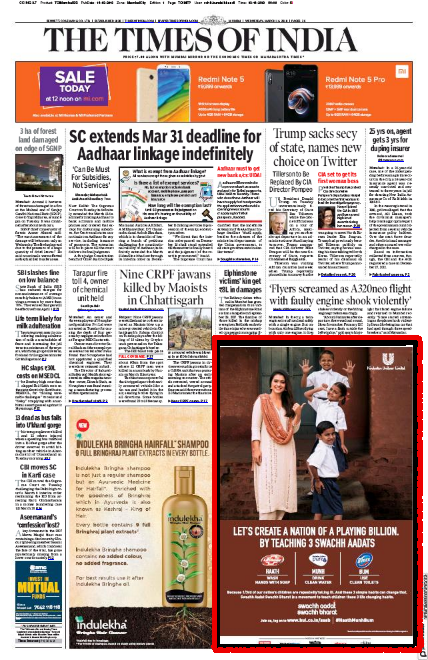 It is important to note that while ToI did not squander away too many words about the farmers’ march, it did carry quarter page advertisements of Hindustan Unilever products on its front page (on 14 March, for instance). Hindustan Unilever is a company which is largely viewed as one of the major MNCs that led the drive towards privatisation and corporatisation of agriculture and water resources in India, and contributed to anti-farmer policy-making that resulted in the agrarian crisis. It is worth recalling that in 2001, a Hindustan Unilever factory in Kodaikanal had to be shut down on the charges of causing mercury poisoning of more than a thousand of its workers.

In today’s India, but for the few exceptions that cover people’s issues, only the Karni Sena’s and Ram Sene’s claim to be the real concerns of the people will register as history and not the farm-distress that is impoverishing millions. If it is not the senas, then it is the mysteries of Sunanda Pushkar’s death and or Sridevi’s death. The media have confined themselves to the groups that can orchestrate media events by astro-turfing instead of ensuring space and time for those who are on the margins without any access to the highly paid advertising and public relations agents.

The latest episode of invisibilisation was perhaps the complete silence on mainstream media, print and television(with the exception of NDTV India), on the mass protests at New Delhi regarding the New Pension Scheme (NPS). On 30th April, thousands of protesters gathered at the Ram Lila grounds in New Delhi. These were all organised sector employees from the transportation, education, health, railways and other Government departments from across the country, demanding restoration of the old pension scheme, because of the speculative nature of the NPS. NPS is a scheme that was announced back in 2004, which has rendered an important social security measure like post-retirement pension into a market instrument exposed to the vagaries of the stock market. This has finally caught up with lakhs of employees across various state departments, more so because of the irony of both central and state NDA and UPA legislators choosing the old pension scheme for themselves while thrusting the NPS down the throats of their employees. The protesters alleged that the Government had implemented NPS “on the directions of the private insurance companies”. The Indian Government’s Pension fund is around 35 billion dollars (It is noteworthy that the amount of “non-performing assets” – a euphemism for big industrialists borrowing public money from banks and not paying it back – across public banks in India amounts to around 142 billion dollars).

The news of this mass protest at the nation’s capital, which should have been “the news of the day”, was not covered anywhere that day – whether on print, or electronic media, barring NDTV India. The following day Delhi edition of The Hindu had a report on Lalu Prasad Yadav’s health in jail on it’s front page, but not a word about this protest. Ironically, on the same day as that of the protests, April 30, Hindusthan Times e-paper carried a full length article where the Pension Fund Regulatory and Development Authority Chairman is quoted asking for an increase in the share of equity (a euphemism for stock market speculation) from the current 15% to 50%, “to match the maximum for private sector pensions”. The same article also goes on to note that as recently as on April 27, the Norwegian Sovereign Wealth Fund which is used to provide for pensions and other social securities, reported that it lost 21 billion dollars in the first quarter alone due to sell-offs in the stock markets.

While newspapers do cover some of these issues but often give low priority by way of positioning, space, and display, the online spaces have their own problems. Online spaces, though warmly embraced by an ever-expanding user-base, and hailed for having opened up the field for outstanding professional journalists and independent analysts, are sadly getting bogged down by a crisis of credibility because of the ‘fake news’ factories. This prevents the governance systems from recognising the present problems and consequently failing to rectify them.

As media teachers, we teach the students to choose the most widely circulated or viewed media for content analysis. Also tell them to categorise content based on prominence (as determined by placement, size of headlines, space, use of colour, display etc.). When big media ignore significant events, or give cursory coverage, a particular narrative of the times gets preserved for history.

But now we have an additional threat confronting us even on online media.

Fifty years hence, when historians look at our times through online content, will they not find more of fake news and a smattering of authenticated information? Going by the number of fake accounts, Twitter and Facebook are littered with detritus that can neither be defined as fact nor fiction but is just plain lies.

Globally, the right-wing political discourse is increasingly being identified as a major player in this falsification of the present on all information platforms. Most such groups are also into the project of ‘rewriting’ history, and attempting image make-overs for some of the horrendous episodes that they have been responsible for in the lives of nations/peoples. The Nazi progroms, partition of India, to name a few.

It is the responsibility of citizens in democracies to ensure that falsification of history and the present through fake information is challenged constantly, and authentic, well-researched information is made available widely to counter the systematic distortion of the past and the invisibilisation of crucial aspects of the present to ensure a truer future for the next generation. The need for inclusive coverage is not just a moral imperative of the present, but a historical necessity to understand where we were and where we are headed.

Padmaja Shaw is an author, and studies journalism and popular media, and has taught media at Osmania University and English and Foreign Languages University. She tweets @paddycs.