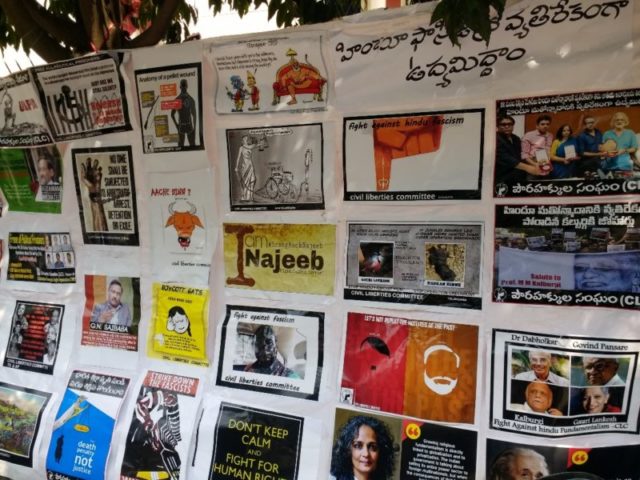 The Civil Liberties Committee (CLC), formerly the Andhra Pradesh Civil Liberties Committee (APCLC), has a long history in this region, and the big hall at Sundarayya Vignan Kendram in Hyderabad was packed through the day for their 1st state conference on April 7, with organisers putting out extra chairs along the aisles. While media coverage has been limited, the event was streamed live by T-MASS, and most of it is archived on their YouTube page. Select videos were shared by Desi Disa too. This is a report of Day 1 of the CLC conference. Participation in day 2 was limited to members. 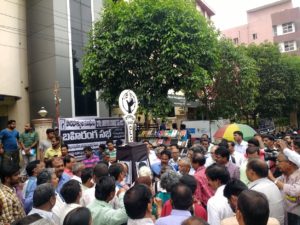 The event began with the unveiling of a tribute to martyrs – a tapestry of names from different contexts – and songs to mark the occasion.

Once inside, after a two minute silence to mourn the dead, the songs continued. Among the groups that performed at different points in the day were Praja Kala Mandali, Ma Bhumi and Arunodaya, with their individual group compositions changing for different songs. The songs addressed a wide variety of issues – from gau rakshaks and the sangh parivar more broadly, to Operation Greenhunt and adivasi life in mineral rich areas, and even further back to longer histories of oppression. 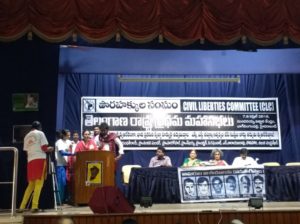 Prof. Katyayani Vidmahe, who was amongst the writers to have returned their Sahitya Akademi awards few years back, spoke powerfully about the threats faced by even middle-class people today. She narrated a story about a student at her university, who was researching songs of the revolutionary movement. He was harassed by the police and questioned about his research, leading him to change his topic. Students and academia aside, journalists too are under immense pressure, she argued with reference to Malini Subramaniam being forced to leave Chattisgarh. She further spoke of rape and gendered violence, and then caste violence as highlighted here with the struggles in Hyderabad Central University. Whenever police atrocities are committed, she said, they will label those targeted as left-wing extremists, or Maoists, and even large parts of the middle-class will remain immersed in their narrow professional lives and think this is not their problem. Conscious of the middle-class addressee of a lot of civil liberties work, she located their present precarity as part of a larger pattern affecting different constituencies in India today. Then she moved on to discuss the mining mafia and their recent targeting of Surepalli Sujatha, and the gau-rakshaks harassing people all over.

Arundhati Roy, speaking in English, focused her comments on “micro-fascism” in India today. Speaking about demonetisation and aadhar as attacks that have broken the spine of the middle-class, she argued that these are demonstrations by the government that they can do whatever they wish and get away with it. Various developments are reducing the dependence on a large labour force and we are becoming a nation of surplus people – and we all know how fascism deals with surplus populations, she warned. However the 2019 general elections go, given the state of communalisation in the country, there is a lot that needs to be done to steer the course. We are being a made into a nation of stupid people, with the attack on universities on the one hand, and on the other hand the people behind aadhar also running foundations that fund young scholars in the social sciences, to the buy the allegiance of intellectuals to come, she argued. In the second panel, after lunch had been served upstairs to all participants, Prof. Hargopal spoke in his usual humorous style, taking the audience along with him. He discussed the history of civil rights work, and its relationship to various kinds of organising. His speech ranged from discussing the importance of the Indian constitution to the framing of people in conspiracy cases. He too paid some attention to the situation of universities in India, and rued the fact that there weren’t further widespread organising efforts against it, as has been happening in South Africa for example.

Prof. Nandini Sundar, visiting from Delhi, spoke in Hindi about the struggles of adivasis in Bastar, and the travails of universities at this juncture. She mentioned the recent developments at JNU, where the Indian Council of Philosophical Research had withdrawn funding for a conference, because it had papers on adivasi religion, among a couple of other factors. It appears that even studying adivasi religion as something distinct and outside the purview of Hinduism poses a threat to the ruling dispensation. She then cited the instance of a court ruling, regarding offensive speech about adivasis, where the judge stated that since the word “adivasi” does not occur in the constitution (which speaks of “Scheduled Tribes”), it cannot take cognisance of the said incident as hate speech. As members of the audience laughed bitterly at these stories, she used them to highlight that even at the level of narrative acknowledgement, the adivasi does not exist. Moving on to discuss strategic hamletting – a method of forcing people into camps and clearing regions (in this case for mining, in a context with widespread insurgency) that she has also previously written about – she spoke of how it was pioneered in Telangana and after journeys through different places is being practised in Chattisgarh, and being adapted for other parts of India. Speaking of the long-history of CLC, she commended them for their continued struggle, and asserted that it is not utopic to fight for a country where constitutionally guaranteed rights are a reality. 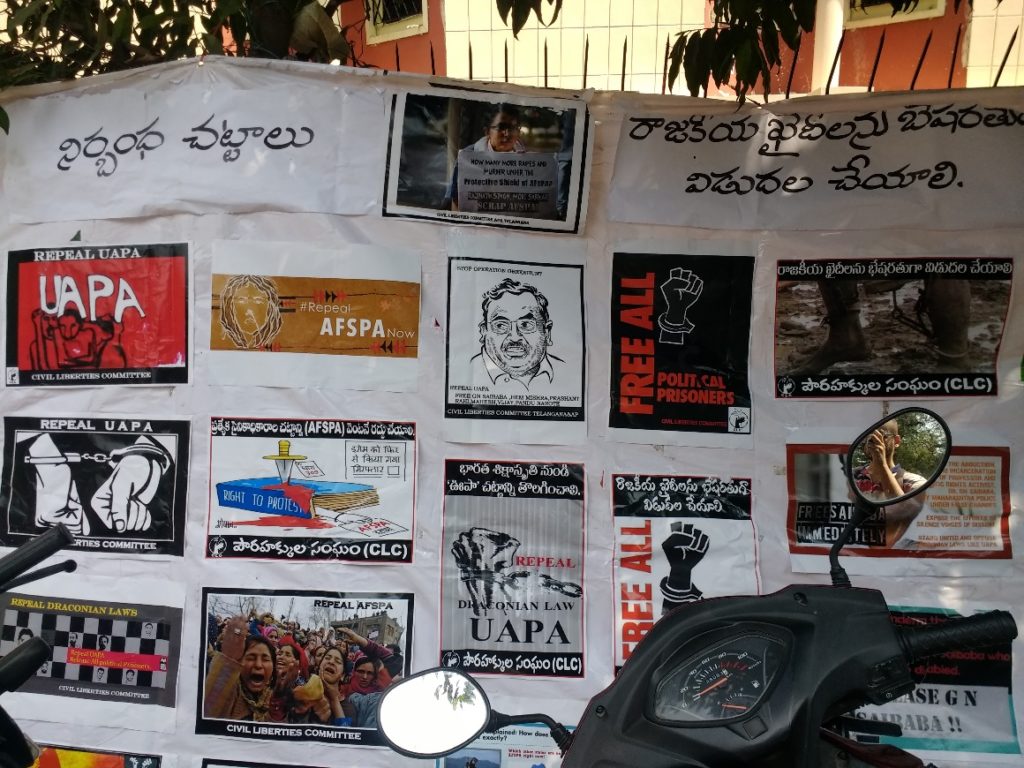 A section of the road-facing artwork. The header on top left calls out draconian laws, and the one on the right calls for an unconditional release of political prisoners

Other speeches and many songs aside, pamphlets by various organisations were circulated at different points. Chants broke out from members of the audience throughout the day. Tea was passed down the rows of people. There were several book stalls at the venue, where one could buy books in different languages, and also CDs of songs. A number of books were released at the event too.

(Abhishek Bhattacharyya (obhishekbolchi@gmail.com) is a researcher and activist, currently based in Hyderabad. Photo credit: author)