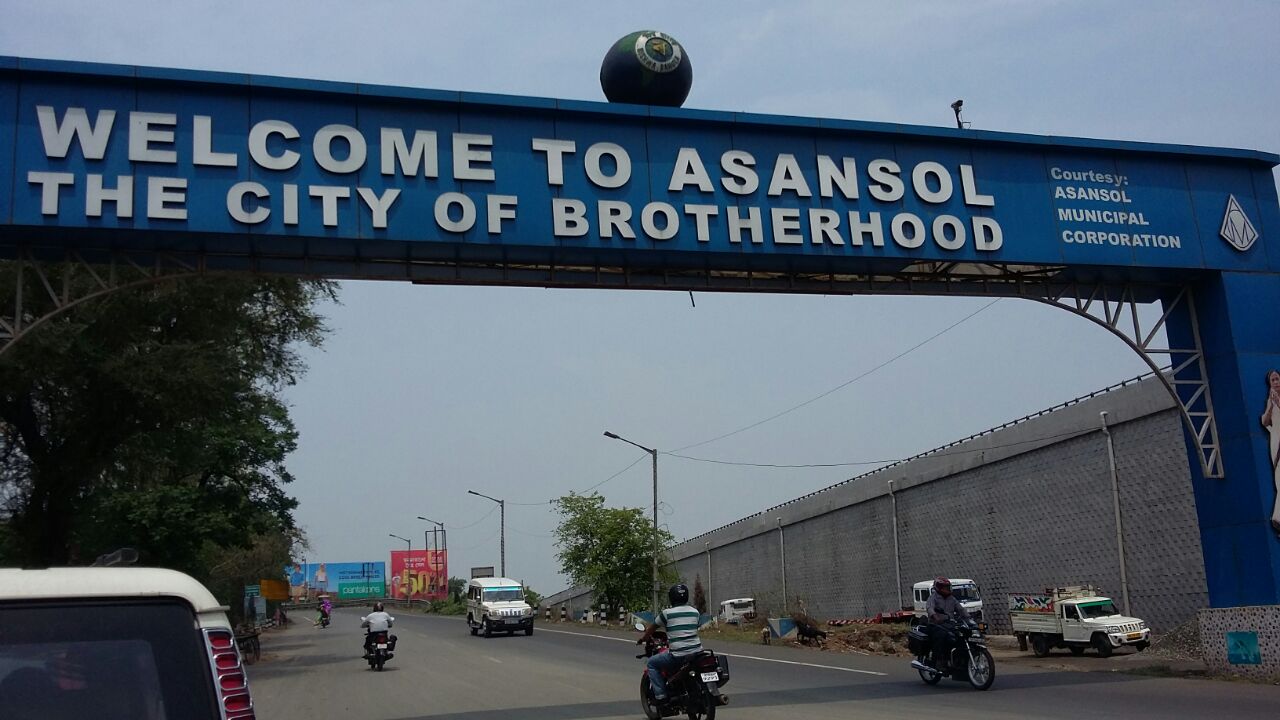 Investigation into Asansol riots (Part one): Mamata played into the hands of the Sangh and divided her support base

The communal fire in the coupled cities of Asansol and Raniganj, the largest industrial hub of West Bengal has been doused for now. But the embers are still glowing. Who turned this ‘mini India’ into a hotbed of hatred in the name of Ram? How and why? A two-part investigative report by Biswajit Roy unravels the method in the madness of the politics of polarization. This is Part One. (Click here for Part Two).

Bengal chief minister and ruling Trinamul Congress supremo Mamata Banerjee has landed into the trap laid by her friend-turned-foe BJP by deciding to celebrate Ram Navami and Hanuman Jayanti with gusto since last year. Her game-plan to hijack Ram from Sangh Parivar’s clutches appeared to have gone horribly wrong as it triggered riots in several mixed population industrial areas over the last week of March. Asansol-Raniganj, the industrial hub at Western Burdwan bordering Jharkhand, was the worst-hit. The latest bout of communal clashes in the state took the toll of at least six lives, including four in the coupled cities under the same parliamentary constituency and civic corporation.

A bitter division among the TMC support base between Hindus and Muslims became evident as this correspondent visited both the cities. The prolonged police inaction at the height of the orgy and TMC infighting that divided the party grassroots communally, added to the administrative and political paralysis. Now the Sangh is hoping to harvest Hindu discontent within the TMC camp while the latter is busy in damage control. If Mamata repeats her folly of competing with the Saffron camp on Hindutva planks and plays up Hindu and Muslim religious sentiments alternatively, it will not only help BJP to retain the constituency in 2019 but also to spread its politics of polarization in the coming polls.

Interactions with affected people, mostly poor and oppressed caste slum-dwellers in this cosmopolitan industrial hub revealed that the riot was triggered by the Sangh’s insistence on taking out Ram rallies through the Muslim-dominated areas in both cities despite the history of troubles in these areas over the years. Not only did the TMC administration allow it, the ruling party leaders and supporters in fact also joined them following Mamata Banerjee’s instruction to rival the Sangh Parivar’s control over Ram Navami celebrations. Jitendra Tiwari, the mayor of the coupled cities who had doled out Rs 5000 to each of the 146 akharas or organizers of Ram Navami processions, claimed that the government had banned display of weapons and playing of DJ boxes in the rallies but no formal undertaking was taken. “We honored the tradition but BJP betrayed it,” he reasoned.

The district BJP leader Madan Trivedi and VHP leader Shasibhushan Yadav admitted that the epicenters of the riots, Rajabandh-Hilbasti in Raniganj and Chandmari-OK Road in Asansol had been trouble-prone earlier. Yet, they decided to hold the armed rallies ‘to assert Hindus’ religious rights in their own land’ and blamed the TMC for instigating the riot. “Milad-Un-Nabi (birthday of the prophet) rallies have started after Mamata came to power. We started Ram Navami rallies on Lord Ram’s birthday to counter it since Modiji ascended to office at the Centre. The increasing footfall in our rallies organized by the VHP has unnerved Mamata. She decided to take the wind out of our sail and asked her men to create trouble, to ban our rallies before the general polls next May. But come what may, BJP will come out with flying colors as the riots would unite Hindus more,” Trivedi said sitting at his bookshop in Raniganj.

Poor across the communal divide bore the most brunt 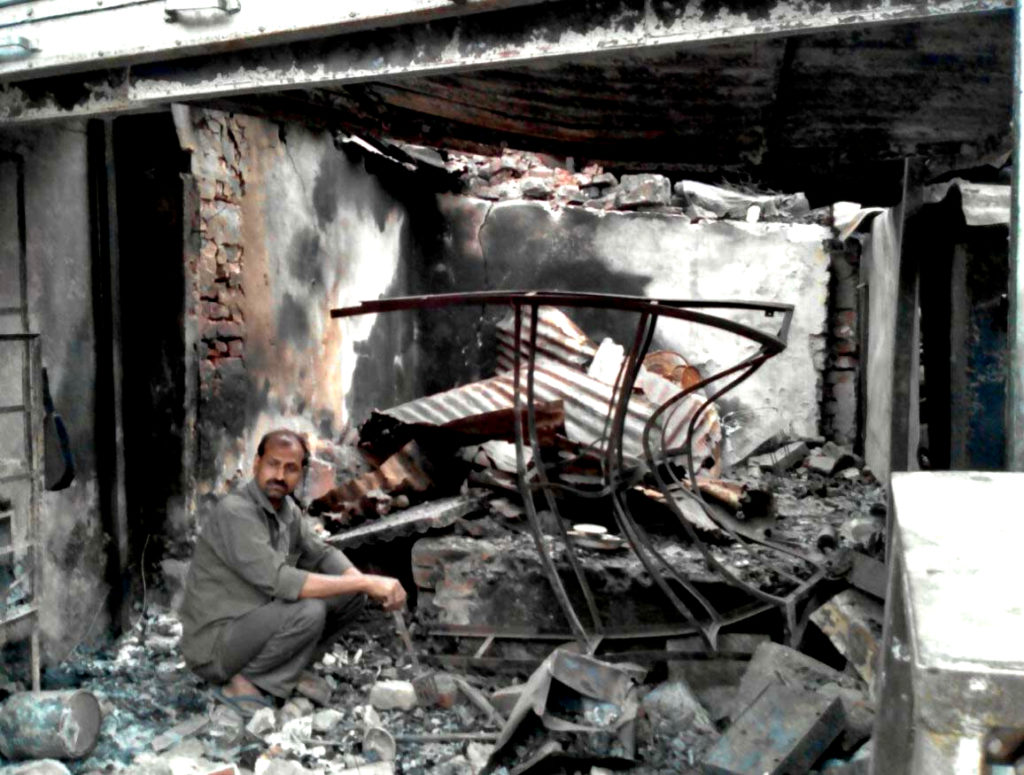 The epicenter of the clash in Raniganj – mixed population slums of Hillbasti, GC Mondol Road, Shib Mandir Road and Dompara – were a scene of mutual ruins. As we entered into the lanes and by-lanes that were still adorned with saffron flags and chains with occasional green flags, men and women of both communities beseeched us to take a look at their vandalized and plundered homes with the hope to draw attention of the politicians and babudom for compensation. Poor and lower middle class women of both faith, stood side by side narrating their plight, complained against police inaction during the height of communal orgy, and poured out their feelings of complete lack of security and safety.

Swaraswati Sharma and Yasmin Khatun, Bhasani Badyokar and Husna Bibi were in tears while recounting how their jewelry meant for their daughters’ marriage or their newly-wed daughter-in-law’s valuables, including the refrigerator and washing machine, were looted and destroyed. Teenager Rita who is appearing for the ongoing higher secondary examination cried as the vandals torched everything at their home including her exam-hall admit card.

As we entered the poorer Dompara, Dalit slum dwellers like middle-aged Nandini Badyokar, Basanti Badyokar, Jyotsna Dom and the younger Kabita Dom, all domestic helps at the middle class homes of the town, took us to their dilapidated and dingy houses. Since looters have ransacked their homes and put some on fire, most of these women and their families pleaded for shelter and succor. “Neither police nor fire services men listened to our plea to save us, claiming that they have no orders to move into our slums. No government officers or political leaders have turned up since then”, Jyotsna lamented. “We are extremely scared to move out but hardly have any money left to feed ourselves. Our employers may not retain us if we are absent anymore. Who will save us from starvation death?”, asked Kabita.

Both sides blamed the politically protected “rowdy boys” of the other community for the loot and arson when we were inside their mahallahs, that are stone’s throw away from each other. Muslim women and men pointed to the boys of Dompara and their accomplices from other localities around, who have become converts to the cause of the Sangh Parivar and its heady politics of hatred. “One of the boys who had attacked my home threatened of ripping open my body with his sword like what they did to Muslim women in Gujarat,” elderly Noorjahan Bibi said. Dompara women blamed local Muslim boys. “Billi, Kallu, Sagra, Taj and Seni were among those who had beaten us up and set our homes on fire despite all our pleading”, Kabita complained.

Male hotheads from both sides echoed the same divisive narrative. Muslims, both TMC and Left supporters, who look down upon Dompara Dalits as “easily pliable to the lures of free booze and feasts” which made their area a ‘den of VHP – Bajrang Dal’. They accused “Dompara boys” of inciting the clash by raising provocative slogans against Muslims and amplifying it through high-decibel ‘DJ’ boxes. “They carried sharp weapons as well as bombs and other missiles on small trucks in the processions and used them to attack our locality. We had to defend ourselves,” a Muslim TMC leader said. Some Dompara youth who earn a livelihood as Rickshaw pullers and day-laborers admitted that they had attended the VHP-organized Ram Navami rally on the morning of 26th March, that clashed with some TMC supporters among Muslims. “They opposed our slogans and sounds of DJ box near the Mosque and attacked us with brickbats and bombs. We fought back. After the Muslims put our homes on fire, we paid them in the same coin,” Shambhu Choudhury said. Krisna Badyakar and Jitu Badyakar echoed him, narrating a TMC-BJP tussle in the area since 2014 poll that underlined the Sangh’s strategy of using Dalits against Muslims.

Saner voices, mostly elderly, however lamented the loss of mutual tolerance and assimilation of yesteryears. “These political competitions between BJP-VHP and TMC over Ram Navami and Milad-Un-Nabi rallies are killing humanity. Why did the VHP raise provocative slogans against Muslims and Islam in the name of Ram? The government must ban the cassettes and CDs of songs offensive to other religions. Our boys too did the wrong thing by taking law and order into their hands. Hindus and Muslim boys burnt and looted each other’s home. What are the benefits they and their political masters have brought to their own community?”, an evidently upset Abid Iqbal, a petty businessman, asked. “We could not save each other’s homes despite being neighbors for generations. This increasing communalization of politics and war cries like ‘Jai Sri Ram’ and ‘Allahu Akbar’ during the clashes brought back the horrors of the Partition days,” Sudhakar Mandol, an octogenarian former school teacher, said.

Kaium Khan, another old man, felt that all religious processions should be banned to de-fang the communal politics. “Let the people pray to Ram and Rahim at their temples and mosques et al. These so-called religious rallies with covert political aims are ruining our lives,” he said, echoing many across the riot-ravaged areas in both cities.

Elderly Syed Israel Khan, former CPM civic councilor for 20 years in Raniganj’s Rajbandh-Hillbasti area, said there was a social agreement since a riot in 1974 that no rally would pass by the local mosque except the Mahavir Jhanda rally during Durga Puja, since it belonged to an older tradition. But the Sangh Parivar did not honor that agreement and instigated troubles in a planned manner. “They funded Dompara boys and other scheduled caste poor among Hindus around the locality to play DJ boxes that ran inflammatory songs and slogans for several days prior to Ram Navami on 25 March”, he added. At the same time, he accused Mamata of promoting competitive communalism that has started taking roots since Trinamul has come to power in 2011.

According to him, an impressive ‘Julush-e-Mohammadi’ or joint rally from Muslim neighborhoods on the occasion of Milad-Un-Nabi has begun after Trinamul came to power. To counter that, the Sangh Parivar has been organizing huge Ram Navami rallies, particularly after the Modi government came to power at the Centre.

“There was no major communal trouble till 2011. Recent rallies by both sides used provocative slogans and aggressive body languages undermining the social relations between the two communities. They want us to forget the local tradition of both Hindus and Muslims praying at Mazar-e-Gouse at the outskirts of the city. People of both faiths had joined Mahavir Jhanda rally at Sholo Ana Mandir earlier. Young ladko me mazhabi junoon paida karna aasan hai. Ye politics Bangal me nahi tha. (It is easy to raise religious passion among youth. This politics is new in Bengal),” the old man lamented.

We met him at the office of Anjuman Imdad-e-Bahami, a local social organization that runs schools and vocational courses for boys and girls. The BJP and VHP leaders complained that hot water and missiles were thrown from the Anjuman school building during the clash. The Anjuman leaders denied the charge and claimed to have sheltered some local Hindu families at the school during the riot. Mahesh Mondal, a wage-laborer reportedly died during the clash in Raniganj. However, we could contact his family.